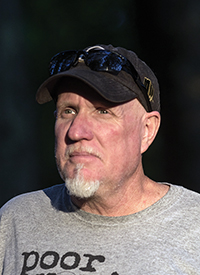 Brent Terry holds an MFA from Bennington College.  He is the author of two previous collections of poetry: the chapbook yesnomaybe (Main Street Rag, 2002) and the full-length Wicked, Excellently (Custom Words, 2007).  His stories, essays, reviews and poems have appeared in many journals.  He is working on new poems, a collection of essays and a novel.  Terry lives in Willimantic, CT, where he scandalizes the local deer population with the brazen skimpiness of his running attire.  He teaches at Eastern Connecticut State University, but yearns to rescue a border collie and return to his ancestral homeland of the Rocky Mountain West.

Every line of the poems reaches toward the glories of humane letters on the eve of their neo-prophetic departure. The apocalypse enacted in these sequences is the furnace of civilization into which mankind has baked the whole of nature and the beauties of art. Troubadour Logic is one man’s determination not to “go gentle” into the amnesiac night where the immense promise of humanity fades to black. ~Bill Tremblay

In the first poem in Brent Terry’s fantastic new collection Troubadour Logic, its speaker observes “memory’s goons don’t shoot sharp, but spray with a wildness/that stitches you up with holes the spotlight shines through…” This is an apt description for Terry’s work here, as his language and form throughout ricochet with an enviable rhythm, rhyme, pulse and feeling. Terry sets his poems positively spinning, gobbling up image and music like a tornado crossing an open field. I deeply admire the taste, intelligence and formal control it takes to create such a tilt-a-whirl illusion. “Oh gorgeous derelict” indeed! Troubadour Logic is a first class contribution to contemporary literature. ~Erin Belieu

I’m feeling prepubescent, postmenopausal, my hot flash
photography shadowed and boxed. Image
engendered, my endangered mirage: flimflam
fornicado on a daybed on a sun porch in a rainstorm
of errant undertones. And the soufflé has fallen
asleep on the job again, the aspartame so, so faux!
Oh, sweetness! I know I can be a bitter pill. I’m hard
to swallow, a deep and aubergine ache
in the gullet of afternoon sometimes your fancy
is tickled, though, by moi. Like in NYC
under the American Idiot marquee. Then post-haste, we,
to Broadway bedromp boutique-chic, to Chelsea
Handler and de Kooning dreams, the window home
to a peek-a-boo moon and maybe later we’ll have pie.

I wouldn’t sleep with you, the Swiss girl slurs,
for all the ampersands in Amsterdam—where Reece,
btw, texts of red-light-blue, between gawking
the Vermeers & pub-crawling zones
of enlightened licentiousness, her bedspun visions
of Dutch Masters tastefully windowframed
& shadowboxing transgender hookers on long, white
walls in a time-lapsed museum of the mind—the Swiss
being vicious drunks, like Buddhists, but still
Sammy Starstruck struts his stuff with the spinning girls
of Warsaw, cutting a rug in a club called Zoo
in a city where next-morning’s footprints sprint behind him,
hither & yawning through urban woods hushed
& hung-over, snowscaped & dotted with Poles
gaping him mad, him dashing all merry, hell-bent for wodka,
running toward/away from precisely nothing,
not death certainly, nor that taxi smoldering curbside,
when love or something like it depends on
getting in your miles/getting over the subway
sausage that laid your guts to waste, on kisses
so expert/unexpected, they unzip the duffel
in your chest, fill you up with something that tastes
a little like Chopin, a little like chocolate,
like Champagne on the talented tongue of the woman
who goes off with you to Rome despite the fact
that you aren’t even French. & what wonders await
in Firenze, one might reasonably ask,
with its favorable exchange rate, its Byronic ghosts,
the torsos of the exquisitely tailored adorning its piazzi?
Will Abigail depart, addicted to ices,
singing Here Comes the Sun, & will Dan & Karen
stumble hand-holdingly upon the lost adverbs of Verona
shimmying iambic in Shakespearian bodices,
box-canyoned in back alleys & cooing
down the centuries, versifying saucily, never having known
of Dolce & Gabanna, acid-trip Ginsbergs, Little Steven
or rolling naked with starlets on piles of Euros,
those bastard children of deutschmarks and pounds,
& will Chris write the sun setting on knockoff Oakleys
& The West in flames, pen Raffaelite cherubs
sizzling hiss & pop, plummeting toward Pittsburgh,
far over the sea, fat & doomed as barbecue hogs?
Dunno, but here in Phoenix I stagger to rise
from the flames I’ve been shot down in,
study to solve the Swiss women at the bar,
like the pole-vaulter searching for a cure
for gravity in Lausanne on TV, where the announcers
all have British accents & the track meet runs like clockwork.

My Cessna sings of skyways where geese
in gaggles honky-tonk the day-glo moon.

The moon filches daylight, sells it back
as Cheese-Whiz, gold-leaf. Amore.

My Cessna dreams of glide-path, of loop-
the-loop. Of Sopwith Camel crash-landings

Of champagne-smash on fuselage.
My Cessna has a St. Louis spirit.

My Cessna coddles cloudsong and moonglow,
taxis past patches where the Great Pumpkin

Yoko, Ringo, Jesus, John. My Cessna sings
Let it Be. I want to hold your hand, stroke

your moonbeam, kiss your landing gear. You
show me your flight-plan, and love, I’ll show you mine.