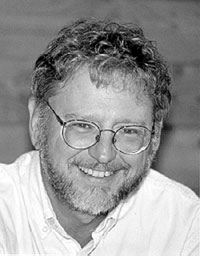 William Greenway’s eighth collection is Fishing at the End of the World, from Word Press (2005). His seventh collection Ascending Order, which won the 2004 Ohioana Best Book of Poetry Prize, is from the University of Akron Press Poetry Series, which also published I Have My Own Song For It: Modern Poems of Ohio, which he co-edited with Elton Glaser. His poems have appeared in Poetry, American Poetry Review, Georgia Review, Southern Review, Poetry Northwest, Shenandoah, and Prairie Schooner. He has won the Helen and Laura Krout Memorial Poetry Award, the Larry Levis Editors’ Prize from Missouri Review, the Open Voice Poetry Award from The Writer’s Voice, the State Street Press Chapbook Competition, an Ohio Arts Council Grant, and was 1994 Georgia Author of the Year. He’s Professor of English at Youngstown State University, where he has been awarded Distinguished Professorships in both teaching and scholarship (twice).

Erratum
“Live from Whales”
—caption on the ABC Evening News

Seen from space, it’s the head
of a boar, and we’re living on a tusk
slavered with the Severn Sea,
camped blowy nights
on the snout snuffling
the north Atlantic, one time
had tea with a famous poet
who lived like a flea in a floppy ear.
That quiff on top?
Rhododendrons of the mountains
where Hillary trained.
Within that flinty head,
we’ve driven past
the source of Stonehenge,
through tar-black quarries
that slated half the roofs
of the world. The stones
of the houses are woven
like shawls, and its greenest
of green is always sprinkled
with the salt of sheep
to bring out the savor
of holiday snaps.
Here in Cymru my grandfather
and Dylan Thomas were born,
and every hill and chapel
once echoed with poem
and hymn. Wales:
where even the coal mines—
so many mouths of the earth—
welled with praise.

He comes up behind us so soundlessly
he might have risen from the mist.
We didn’t even hear the tire-
crunch of his ancient bicycle on this
gravel path by the cairn of an ice-age tribe.
Now I know what novels mean by a suit
“shiny with wear,” or “threadbare,”
or a shirt “yellowed with time.” His tie,
though, is well-knotted, and he’s white-
haired, Welsh-small, and almost natty.
Ignoring me, he talks to the boy
of parallel universes: “Oh, they’re everywhere,
you know, all around us. They go on and on.”
He finally rides off toward the woods,
but when we turn back, he’s vanished,
and since no one else has seen him,
the kid is spooked, and I tease him, saying,
it’s like he knew you, maybe your Welsh
grandfather born in the village nearby,
come to tell you something.
They’re all around here, ghosts, I say,
like the hangman who hanged himself,
or Paviland Man, found in a cave
just over there on the coast, dead
for 26,000 years, his bones festooned
with tigers’ saber teeth and wooly mammoth hair,
daubed with ochre and trinketed,
tricked out to the nines, as if
he were going someplace far away,
or as near as here and now.

Remember? After breakfast of a proper
old greasy fry-up— eggs, bacon, sausages,
grilled tomatoes, fried bread, and baked beans
washed down with lashings of sweet milky chai—
we drove out to Rhossili,
an act of faith since it was dull
again, though the minute we got there
the clouds dissolved. We ate
pasties in a heathery little suntrap
on the cliff and looked at the Worm
while a farmer and three green-eyed,
black-and-white border collies
moved a bawling flock between fields.
Later, scones in a tea garden suspended
between the azure sea and sky,
people down on the sands the size
of ants, and dogs running everywhere,
their tongues hanging out in happiness,
daffodils flecking the leek-green Down.
In the evening, sex, sewin, and Gower
potatoes with Sicilian chard,
but American cherries big as apricots.
One of those days you want
to bottle, or put under
a glass cake dome,
the little figures on top
forever young.
Well, young-ish.