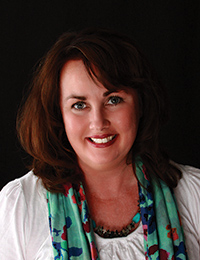 Catherine Moore is the author of three chapbooks including the recent WETLANDS (Dancing Girl Press). Her poetry appears in Caesura, Southampton Review, Still: the Journal, Mid-American Review, Pilgrimage Magazine, Appalachian Heritage, and various anthologies. She’s been awarded a Walker Percy and a Hambidge fellowship, her honors also include the Southeast Review’s Gearhart Poetry Prize, a Nashville MetroArts Grant, and several Pushcart nominations. Catherine holds a Master of Fine Arts in creative writing and she teaches at a community college.

~“Ulla! Ulla!”—the death moan of Martians in H.G. Wells’ War of the Worlds doubles as the clarion signal for attack, dystopia, and ultimate destruction in Catherine Moore’s unsettling and profound debut poetry collection. This war readers are immediately grounded in ultimately tunnels inward to the brokenhearted poems of the speaker’s interior life. In Ulla! Ulla!, Moore walks the earth’s surface as if it’s a foreign planet, elegantly collecting our human remains “in the after-swallow.” ~Sandra Marchetti, author of Confluence and Sight Lines

Catherine Moore’s Ulla! Ulla! is a collection that moves deftly between the “delicacies of the moment” and the natural world. As a poet, Moore’s eye is both subtle and adept, able to note with equal precision both the beauty and the terror that surrounds us. This is a book of hard-won knowledge, filled with vital work that reminds us to be human, to understand how even what is diseased and decayed can also be the locus of unimaginable beauty. ~Steve Kistulentz, author of Little Black Daydream

Like the listeners frightened by sounds of imaginary aliens, Moore’s readers will be wary of this world’s facts and fictions. Much of this book lies between what has happened and what could have happened. With impressive authority, Moore keeps us in limbo, and manages to root us in specific spaces, whether the realities of Ferguson, MO, Captain Kirk’s oddities, or the tragedy of cancer. A testament to Moore’s immense talent, this a fantastic book. ~Erica Dawson, author of The Small Blades Hurt

2.
I know some lonely houses off the road
and odd scraps of people, a guidebook
told in installments. The few souls

blowing the heads off dandelions.
The rise could be the hill you slid
down during winter’s wheeze

or where kites launched
along its top in warmer breezes.
But it is only berm

and barrier, it is the edge
that holds the clouds’ chalk
wing on water

between line and drown.

3.
River is within, the backbone of this whale
a large bow on which to bask, churn a white
stream back towards the sea.

The earth is sea, the earth is flood.
Broad and blank, its circulatory flows,
in rain, in fury, if the river is within.

4.
the tearing surge
the menace in caress
the pulled together
the drawn ashore
the chum left sinking
the breakage.

5.
To raise the river’s prayer to its god. The look behind, over shoulders, eye primitive fear,
only barely prayable prayer of ascension. Like the poor man’s river with its cargo of the
dead.

6.
When the river is a foot in blackened ice
and the stark bones of its tree banks shiver,
I’ll caw over the mistakes I’ve made.
Concede what my high water carried from backyards.
Allow the salvages to spill from graceless height.
I may even nod to the fault line I muted.
While a slow groan of ice and mortification flay
its way back into muddy water, I’ll tell the crows
in frozen blue-eyed grass fields to fly south.

7.
The river is a beautiful place to be born
if you don’t mind the deep aperture
of shadow when the day is sun and light.
Or to live in close confines with unruly force.
Know the surge to wash, change course, abandon
the prosperous kingdom. This ground swell,
unattached in its devotion, ends just as it begins.
Hallelujah to the watching and waiting. Its rhythm
under every front porch and each nursery crib.

8.
Sunday up the river
a sinking man rises
three times to face the skies
to leap, splashless, land
as others flow past
root and rip and rock,
past tabernacle or tomb,
in the margins of strip and baptize
by the great waters of the West
and some fish’s catacomb.

9.
Most of what I know abides
in stories at the waterline, pitiless
as drowning without a rise of sound
with only a gaze of blank embankment.
Being last to mark this river’s crime.

I cast more strength than I possess
I hold no branch, offer no outstretched
embrace. This arm is artery, not limb—
its pulses sweep and ferry sand
or lands, or hearts and hands.

I stand stalwart. No doubt it plots
a watery furrow towards a marsh.
My sight hindered in steel and bolts
I’ll listen as it rushes for a mouth
in which to shoal the loss.

11.
Riprap. The life line of significant soil. Against scour. In pews.

12.
What the Bible said about floods is true.
See the survival of blood and currents,
the protein of fertility pooled at feet.
Follow the trickle through the bed
of gray lovers, lifting each other’s stone.
A sad heave, like the men in black boots
who sandbag on grass hills, futile marshes,
who rise and move away from the breath
of a heavy sleeper left dreaming of floods,
and who never question the two AM drive,
to bank at the river’s edge, to simply die.

13.
I lead a quiet life now,
buffering the meadows from madness
forgetting fields lost along the river run
humming to myself how life never dies.
In the true north of my introspection
birds are bearing fish
fish will bear messages
messages bare nothing but bones.
As the river writhes away
I’ll halt the sluicing of seas
that devours America.

A man wouldn’t even have Captain Kirk sex
with a ball-busting barracuda like that!

It’s the final nail, dead wrong, a drop & boot,
exactly what he did to the novel he was reading.
‘Captain Kirk sex’ as if this was a thing,
a known, comprehensible thing?

They move in delicacies of the moment
skirting any minutia from the past.
Together in the unknowing, the dissolve.
This subtlety breathes next to her in bed.

Tempted to reply, about men, about sex
with anyone, anytime, instead she remains silent.
He expounds a plot of betrayal and jail sentences,
how passion pales in such circumstances.

In small night hours, her mind focuses less
on prison libidos, than on ‘Captain Kirk sex.’
The term irritates like tribbles under pillows,
how loud it coos.

A week of indecision is like a long autumn
flickering in colors and clutter. They ignore
the hum of chaos, falling leaves,
the cooing in the bedroom.
How can they not hear? Or do they pretend?
The unacknowledged noise, endless
like static between the half-tuned.

Each new episode is a cliffhanger
in this blackout, in self-imposed
deafness, unfinished conversations
or ones not yet started. The echoes
of these Kirk-isms—do they reveal
a casual acceptance of misdemeanors?
A chalkline of duplicity in this not talking,
a line that discretion taught
in decoder rings, pig-latin, secret
handshakes, the intermediate school
lessons where his radar was honed
for the above board, or the down low?

When a hopeful play-maker resistance is futile!
meets with an eye-brow lifting fascinating,
Dick and Jane leave-off the Sci-Fi for awhile
and comments turn to the arrogance of Top
Chefs and the sad prey in flightless birds.
He prefers Emeril, she prefers Swans.
He eats monogamy, dreams otherwise
she dreams monogamy, mouths everything else—

even tribbles shriek when Klingons are near.

In $45 wrapping paper Jane wishes
the newly imagined girlfriend’s gift is not
as expensive as the items they exchange
for Christmas. She wishes all the girlfriends
are disappointed this warm, wilted holiday.

Dick plots to never spend time on any of them.
A dime, yes, a thought, no. There is a file
drawer of receipts cataloging his stratagem.

Always, the murky bottom of drawers
holds boxes of the random, the unattractive—
photos, letters, worn mementos that bait
Hey that’s mine, over Goodwill piles.

Nona, Andrea, Marlena, possibly Eve—
names as indistinct as faded lettering
in an Alzheimer’s mind, minutia of the past
and present remembered as a compote.

Yesteryears’s scoundrels lurk
like shaggy tribble dolls that he hides away
from her ‘donations’ box. The trouble
is inevitable, multipliable, migratory,
they announce their presence
to the present in a distinct hiss.