Uncertain in the Worst Way

For those who prefer to pay by check, the price is $17/book (which includes shipping and applicable sales tax) and should be sent to: 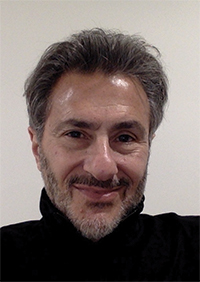 David Ricchiute is the author of a collection, So Everyone Else Will Know: Poems (Aldrich Press), and poetry & fiction in NOON, POEM, Tampa Review, Red Rock Review, and The American Journal of Poetry, among others. Formerly the Deloitte Professor of Accountancy, University of Notre Dame, he is the author of research on decision making in the Journal of Accounting Research, The Accounting Review, Journal of Applied Psychology, and Journal of Experimental Psychology. He is a volunteer at the Beacon Children’s Hospital Ronald McDonald House and at the Northern Indiana Center for Hospice Care.

Uncertain in the Worst Way tackles the theme of polio in the best way. David Ricchiute first introduces us to “A Boy Near a Creek” and “A Girl in Her Room.” Then through the untypical medium of poetry, he documents the disease including Post Polio Syndrome, a condition afflicting polio survivors years after recovery. From FDR and Salk to children in rows of iron lungs, Ricchiute delivers a wide-ranging poetic documentary of an uncertain epidemic.  ~Barry Harris, Editor, Tipton Poetry Journal

Thank you, David Ricchiute, for this beautifully-crafted, heartbreaking account of polio victims in the 1950s, many of whom suffered from a return of the condition (post polio) many years later. We also feel the pain of parents who saw their child go from playful to imprisoned in an iron lung – some of those poems express the horror so well that they are a little difficult to read. Elegant, sophisticated, at times powerfully sparse, this is a gem of a collection that will tug at your gut, evoke admiration (and envy) for the writer’s skill, and teach you history.  ~Robin Stratton, author of Some Have Gone and Some Remain

As we go about our lives as best we can in the current pandemic, David Ricchiute’s Uncertain in the Worst Way reminds us that there have been murderous precursors in this country. In a well-researched cycle of tightly wound emotional poems set to a cadenced iambic meter, Ricchiute captures the uncertainty, the fear and frustration of children and their parents during the polio epidemic in the early 1950s. This is a powerful book. ~Jeff Worley, Kentucky Poet Laureate, 2019-2020

A Boy Near a Creek

Near a creek where his mother said,
don’t dare go,
a young boy spots a garter snake,
jaws surrounding a half-swallowed worm,
compelling the boy to bend at the knees,
starting the descent toward the lumbering snake.

It’s then that he buckles from weakness in his legs,
ignored for days as a nuisance that passes
—like a brain freeze, maybe, or a parent’s stare—
something like anything a child overlooks,
until the nuisance firms its grip.

reduced for now to a boy again,
blocks away from the mother he defied
—& miles away from a puzzled girl
ignoring symptoms she barely felt.

Leaves Would Have Fallen

In another month, leaves would have fallen,
followed soon by seasonal frost, slowing
—then ending—the frightful assault.

In a driveway, a father says, God, why now?
In a car, a mother says, but for a month.

On successive days, overcast days,
the parents of the boy & the parents of the girl,
otherwise unaware of the other,
calm but uncertain in the worst way,
admit the terrified boy & girl
—their lungs unable to breathe on their own—
to a dedicated ward on a leafy campus

“Chapin” for short, Chapin Clinic,
the city’s one hope for infectious disease,
where a placard in the lobby reads:

& offers etymology from the Greek:

If you’d admitted a child of your own to Chapin,
you’d have struggled to summon the courage to read it
—or to open the door of the polio ward
steps from the lobby floor.

On a knick-knack shelf that held their treasures,
the mother of the girl placed a figurine
—bought with pride on the Mohawk Trail,
made in an era, the shop keeper said,
likely at the turn of a century before—

posed as a well-dressed women of means
striking a slightly aggressive pose,
more like a fearless suffragette
than the passive stance befitting clothes
that sparkled in sun-drenched pastel shades

the cover a color like the figurine’s,
the cover wrinkled from the night before,
the cover stained a pale yellow
from sweat that beaded on the child’s skull.