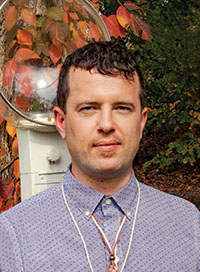 Eric Helms holds degrees from Furman University and Columbia University’s School of the Arts. Having spent the past decade in the city of New York, he currently resides in Asheville, NC. Some of his work can be found in the Asheville Poetry Review, key_hole, Prelude, Diagram, MadHat Lit, Souvenir, American Athenaeum, Rhino, 4×4 and Blunderbuss.

Like any good enfant terrible, Eric Helms embraces a number of ideals even as he disregards the expectations and pieties of his moment. Chief among the principles that motivate him, pulling him towards creation rather than, say, actual arson, is a love of beauty so powerful it sets these pages ablaze in a manner of speaking instead. But Helm’s notion of the beautiful isn’t commonplace or refined, but radically heterodox—part tonic, part toxin, compounded of a “luminous cliff-face of cloud” and “gin-soaked floors,” “a sea of polished granite” and “a god who still sits / Stark naked, on a fire hydrant’s top….” But as wild as these poems grow, as overcome by the “star-bound thirst” not of a Shelley but of the Mr. Hyde that Helms inhabits, they never feel wholly unbridled, largely because Helms’s demonic intensity is always balanced by an angelic grace, as Rimbaud’s was. And if there are notes of a Rimbaud throughout Valley of Empty Pockets, other spirits are invoked, too—Kafka, Pessoa, Stevens; even James Tate and Mark Strand, an early enthusiast of Helms’s work, are all summoned into the psychic ceremony of this book (whose title is a metaphor for the poet’s mind) and released into the past so that the poet can become himself, and “prop / on the piss-stain of (his) top hat and begin to crawl.” This is a consummate, potent book, and I’ll revisit it repeatedly, in awe. ~Timothy Donnelly

all starts with some scree falling into a narrow loch,
not far from where this dark vague drinks a black drop

from a test-tube then dares to drop off the foot
of this mountain, tumbling through some mistake

heʼs made before–some grass & thorns, making himself
a fable then almost torn enough to thirst for

a different kind of truth. As if such could release me
from all trouble & ache. Against all odds,

I wake on the ground Iʼve broken for and bite in-
to this bitter loaf, which Iʼve bitten before.

This winter. The dark smudge increased its dent
beneath the radiatorʼs heat and whistle.
Our mounted stag moaned above the steam
and, like our conifer, his points seemed to sag.

From the window, not one morning where the snow globe outside
was not an eyesore. Four a.m., shovels scrape, clearing a frail path
for blotted epilogues, loaded soliloquies, those that parade at this hour,
from dive bars and taverns closing doors. “Clouds of zip-locked meat, azure!—”

As a washed-out habitué, wearing a fast-food crown
and, carte blanche, garland of toilet paper,
might scratch himself from a billowy ditch–
still devoted to the orange stain of his monkʼs habit,

a cosmonautʼs remaining strobe of light.
Through a high-gain antenna, channeling
the éclat of Michael Jacksonʼs Thriller

before bowling over a last row of backseat Baptists
and a few gutter pups. Their anonymous chorus—
the refrain which, even now, keeps coming back.