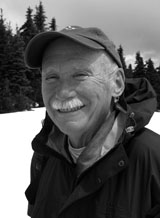 Michael Gaspeny won the 2012 Randall Jarrell Poetry Competition and the 1998 O. Henry Festival Story Contest. His work has been recognized in other competitions and published in many places, including Brilliant Corners: A Journal of Jazz and Literature, Cave Wall, Crucible, and The Greensboro Review. Blues and jazz artists figure prominently in his poetry, which has been praised for its musicality. Gaspeny taught English and journalism for almost four decades, mainly at Bennett College and High Point University, where he received the distinguished teaching award. For many years, he reviewed books for The (Greensboro) News & Record. While gaining an MFA in fiction at the University of Arkansas, he worked as a sportswriter on the Razorback beat and a general assignments reporter. His coverage of Bill Clinton’s first campaign for national office is often quoted in biographies of the president. Gaspeny, who grew up in Norfolk, Virginia, is married to the novelist and essayist Lee Zacharias; they live in Greensboro, North Carolina and have two sons, Al and Max. A hospice volunteer for ten years, Gaspeny has received The Governor’s Award for Volunteer Excellence.

More than anything else, these poems by Michael Gaspeny evoke life. Readers are carried by images into time has already passed, like the journey of Muddy Waters from “the Essaquena muck” to Chicago’s South Side, like the glimpse of a group that gathers off a dusty road–“men in straw hats and women in red do-rags,” to the sounds of jazz “like sunlight dinning on pews / after church.” The poems lead as well to today’s suburban neighborhoods where judgment watches from clean, curtained windows and the streets have names like Radiance, where a woman who knows Christ as her savior wonders “why the dark is the only place / where you can be yourself.” Through all the journeys, all the comings and goings and observations, the language is rich. And tasty. The voices are true. The music never really stops.

author of Waking to Light and Fat Moon Rising

We plucked the chickens from the rusty crates

whizzing on the conveyor belt

and cuffed them to the swaying racks-

butt up, beak down, eyes to the wall, click-click-

and the racks swung on.

Some were hysterical, bowels exploding;

a few DOA, many stoical.

Some popped from the packed cages

into the stinging light, flapping

across the feathered floor. These clawed

at our eyes and cut our chins.

In the filth and pain, we battered them.

In the beginning, the line was a blur,

but once I caught the rhythm

and the hallucinations started,

the chickens slowed into people

I sent to the tranquillizing room

for light shock and easy throat-cutting.

After a week, I left, sick

of chicken and myself

but sure of our connection.

Either we move because we need

or need because we move.

What chickens do, we do, too,

batten on the weak.

All reach the table in the end.

Nobody under the firmament

but grades of chicken, my friends.

The picnic table at the head of the trail

where you served hors d’oeuvres and Corona

to commemorate your three years

has been sprayed by graffitists

and gnawed by the knives of squatters.

The logs you cut and laid as the path’s border

are lost in the weeds

as the trail grows fainter.

The power company has seized

the bluff overlooking the creek

so wide and high

it walls out the other side

although if you listen hard

you can still hear the water.

you cannot see a living feather.

Not to fully despair, however:

The birds honor you

by refusing to be there-

and your winding suit now bears

a decoration from a higher power-

as your bones grow hollow.

If you would like to read more of Vocation by Michael Gaspeny, order your copy today.