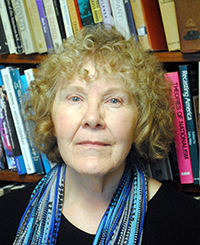 These are amazing poems that inhabit that mythic folktale realm between the animal world and the human. The poet understands both and moves freely between them whether exposing arrogant cruelty or uncomprehending suffering. The haunting images surprise with depths of insight and immense compassion, knowing that we all share the same cycle of life.  — Michael O. Riley, Profess of English at Georgia College and author of Oz and Beyond: the Fantasy World of L. Frank Baum

Washing Birds is all about celebration and compassion. Joyce Thomas  recreates in words the curious wonder that is nature (elephants and birds,  for instance), the unlikeliness of the human heart. She summons from  her readers regret for the birds and elephants suffering the whims and catastrophes attending human amusements and pollutions. She recognizes both the natural mutability that all creatures (elephants, birds, people) share, and the cultural calamities of endangered species and heart attacks. There is white magic and black magic in the world. Joyce Thomas invites us to respond to both. –Tom Smith, Jack’s Beans: a Five-Year Diary

Driving the dog home from the small animal hospital,
I am struck by those so early waiting

by the side of the road,
by the children who are standing

and dogs, and the years of waiting
for the yellow bus

to come down the road, caution flashing
under the early morning sky

and the moon’s old coin fading to blue.
Now the children I see

near the stops where they stand;
and some of the children wait shadowed by dogs,

warming the last of the leaves that have fallen
where they sniff near their boy,

near their girl,
‘til the yellow school bus at last comes,

and they leave.
To return at exactly a quarter past three

and wait for the bus,
the same that we passed but a short while ago;

wait for the children, the lost boys
and lost girls, whom they will wag home:

wag like the years,
the years I have summoned that come running,

most loyal of ghosts,
under the moon’s gnawed bone.

It is easy to despair
as one begins to cleanse with liquid Dawn,

so one thinks of sunrise and resurrection,
or, at least, remembers

or recalls the sudsy splatter
when washing the dog.

Thinks, as one bathes
each wad of sludge and feathers,

into which the oily dead are dropped,
wings come down to trash.

It is easy to care too much.
So one thinks of the razor-sharp edges

of fine bone china saucers and cups,
and the soft, smooth skin of babies:

of things too precious to be entrusted to machines.
And of the dying who often are—

and, yes, those who bathe them:
their hands light as breath,

I’ve been thinking of the fish my grandmother’s sister kept in the pool
in her garden, how beautiful they were

with their veined, translucent fins and tissue paper tails,
and long, flowing moustaches trailing like scarves in the air

that was water, and them glimmering orange, gold, ebony and pearl
in luminous reiterations of scales and sun,

of fish that cost more than a meal.
How I stood at the rim watching them swimming

in the dark that seemed deep as a well,
sinking so slowly I could not tell when the body vanished,

its image became only a shimmering scrim of scales,
of brightness that had been looked at too long.

How I stood peering in, looking for them like tiny Nessies
to rise out the leafy spume of the depths,

with handfuls of wishes, wishes
for fishes to come swimming in light,

come for the crumbs being flung on the mirror,
come through the dimming drowned moon of my face.