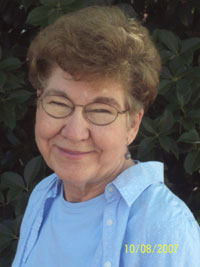 Carolyn Noell grew up in a rural community outside Chapel Hill, NC and now lives in a turn-of-the-century house in Davidson, NC with her husband, Tom. Before retirement, she worked as a teacher/counselor with the Charlotte-Mecklenburg School System. She and her husband have three children and three grandchildren.

Carolyn is a member the Charlotte Writers’ Club, as well as a Davidson writers’ group, which she describes as smart, wise, and supportive. Her poems have appeared in Bay Leaves, Award Winning Poems of the NC Poetry Society, The Lyricist, Wellspring, Iris, The Savannah Literary Journal, and Main Street Rag. Besides poetry, Carolyn writes non-fiction and essays, and has also read her commentaries for WFAE, public radio.

ON LOOKING AT GREAT-GRANDFATHER’S PICTURE

Shot in both hips he waited,
tried to squeeze his ears shut, bargain with God.
Yankee hands pulled him into a barn,
wounded from both sides echoed his moans.
They talked in darkness, shared warm canteen water.
Daylight brought loading to stretchers,

wagons hauling to a Delaware hospital…
a year later, a Jamestown prisoner exchange.
Nineteen, he stared at papers declaring him
Unfit for military service.
Blood oozed from wounds as he plowed,
raised a family, built a church.

Singing hymns
on Sunday morning,
I hear an absent soprano
beside me, the notes going
high, the words sure, memorized
long ago.

I know what she’d be wearing…
a church dress whose color
is broken sparingly by small flowers,
black, lace-up shoes,
a brimmed hat with a band
of grosgrain held by elastic
under a hair-pinned bun.

I stood at her elbow,
watching her movements,
surrounded by sound,
the notes in my mind like
grooves cut
in an old wax recording.

THE OLD WEST CAME TO CHAPEL HILL ON SATURDAYS

to eat pintos with onions,
day-old doughnuts, drink Pepsis
from the crate by the back door.

He delivered his boys and my brother,
Dan, to the Village theater
to watch Hop-along Cassidy

from two o’clock ’til closing-
first time to enjoy the plot,
the next four to memorize lines.

After the store closed at eight-thirty,
Mr. Lem pulled down a theater seat,
lost himself in gentle jokes and shoot-outs.

ran through open fields,
where the slap of broom straw
became manes of untamed horses.