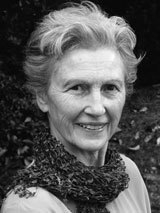 Blynn Field
Blynn Field, a Kentuckian by birth and a North Carolinian for the last forty years, was drawn to New England after college. There she taught ballet and high school French, learned to ski, and met her husband Jack. The poems in this collection are based on Blynn’s memories of living in the Northeast and of introducing children and grandchildren to the Green Mountains of Vermont and to the rugged coast of Maine. A casual poet most of her life, Blynn began to write seriously twelve years ago. She has taken courses in poetry writing at several universities and has served on the board of the Charlotte Writers’ Club. She enjoys the quiet meditation associated with writing and the social pleasure of being with other writers at readings and workshops.

Blynn Field’s Whale Watch Cottage revolves around a sense of place, a cottage offering simple things: a copper teapot, a deck in the scent of seaweed. This is a place where one enjoys familiarity but is also ever alert for the unexpected: a sighting of a whale, deer performing a dance, exotic birds. Field longs for “the illusion of a secure life,” yet ponders the tragedy of 9/11, the mistreatment of prisoners. Then comes the death of her husband. However, in Field’s capable hands you will not find poems of self-pity–loss and grief are crafted into sure-footing. These are poems of gratitude, often tinged with humor. Reading this seamless collection I was reminded of Richard Wilbur’s poem “Love Calls us to the Things of this World.” These poems do exactly that. This is a grand first book, and hopefully there will be many more.

If You Ask, “Where is Whale Watch Cottage?”

I’ll pause, because the way is part of me.
This I can say — it’s in the state of Maine.
You’ll find it in a reach off a sound
that mingles with Atlantic’s waters.

By ferry, you’ll barely see the walls,
wooden and blue-stained, up on a bluff.
On land, take the throughway to Route One,
look for signs that say Penobscot, then wend
your way down river toward the bay. There’ll be

a placard for the inn
where you turn onto an unpaved road
and you’ll see the cottage almost at the end.
Built in the nineteen twenties, it’s rustic,
the name carved into a wide board. The rooms

are small, the floor unpolished. Simple
furniture, with a few heirlooms.
No central heat. No washing machine. Here,
memories and view expand.
Broad waters. Islands. A lighthouse
marks the gateway.

My husband Jack, who works
this alchemy into a Perfect Manhattan
under the stars on ocean’s edge,
might achieve other magic too.

After four sips, he is less exact
and I am less abrupt. After six sips,
I am less withdrawn and he
doesn’t exaggerate as much.

A final swig, then reaching
for the cherry prize, we marvel
that we’ve allowed our flame to sputter,
but never doused the glim.

I look for car tracks in the dirt road,
peep in windows, check the roof and doors,
breathe in the perfume of spruce and balsam
mixed with wood smoke from an unseen chimney,
recognize the Chickadee, the Purple Finch.

Since our new President’s election
I’ve wanted to come shout my gratitude
and forebodings to the clouds, confirm
that — although the world has changed
and I have changed — this cottage
on this granite rim has not. Drawn

to the surf, at first I’m still,
listening to the crash of waves.
Then, zip my anorak, walk in long strides
past seaweed and periwinkles,
not to be dismayed by the limits of man
in this sweep of universe. A year

before Jack died, I asked him,
“What if the seas rise up and this place
disappears? What will our grandchildren do?”
and he replied, “They will find their
own welcoming harbors.”