What Light I Have \ Debbie Hall 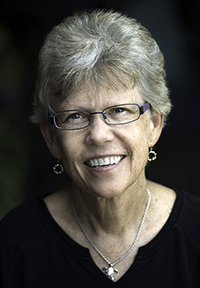 Debbie Hall is a psychologist and writer whose poetry has appeared in the San Diego Poetry Annual, A Year in Ink, Serving House Journal, Sixfold, Tuck Magazine, Bird’s Thumb and other journals. Her essays have appeared on NPR (This I Believe series), in USD Magazine, and the San Diego Union Tribune. She recently received an honorable mention in the Steve Kowit Poetry Prize and just completed her MFA at Pacific University in Forest Grove, Oregon. She enjoys all types of creative writing, but has always felt that poetry comes closest to the heartbeat of life.

In “If the War Doesn’t Go Fast Enough, Plant Flowers,” Debbie Hall concludes, “I am not sure where hope resides in the brain.” It is the considered honesty of a woman who has devoted her life to studying the minds of people, to seeking, through empathy and intense, almost obsessive attention, to crack the complexities of the mind, and who now has grudgingly resigned herself to the mysteries of the unknowable things in life. It is this same care for attention that she brings to her poems in What Light I Have, poems that reflect on her patients, her family, her life as a woman and traveler during her years in this world. It is the kind of intense scrutiny that demands release, which she finds in language, in poems that discover beauty in the known and unknowable worlds. In the end, even as she demonstrates her deep-seated belief that “every creature does its part/ for the others” it is the power of mystery and fantasy that undergirds her desire: “I’d like to depart this earth/ on the muscled shoulders/ of black-feathered angels/to be buried in the sky.” Here is an auspicious and generous debut by a poet of immense promise.  ~Kwame Dawes, author of City of Bones: A Testament (Northwestern, 2017)

“Have you done all you can with your fortunate measure of life,” asks the poet as she opens this collection. Assaying a lifetime of experience as a therapist, naturalist and world traveler, her first question casts light on everything that follows. What is hope? What is divine? Debbie Hall asks the large questions, and the size of her heart and the breadth of her vision make one feel blessed to accompany this fine poet on her journey. ~Sandra Alcosser, A Fish to Feed All Hunger and Except by Nature

Debbie Hall’s book of poems, What Light I Have, enlightens, casts a vast spectrum of illumination across and through the human experience in such a way that we get to ‘see’ a vision that is precise, visionary, and full of attitude. Her writing is one that allows the reader to enter a world immediately, and be taken, all generosity, in both arms and flung about. In the best way—all life, beauty, and flame. ~Matthew Lippman

A patient unloads her history week after week
in the office, recounts a childhood of dodging fists
and criticism, but she won’t reveal her feelings.

She reiterates a litany of personal faults,
holding on to them, buoys in a rough sea
that threatens to swallow her if she lets go

and accepts a different idea about herself.
Her eyes narrow and she turns her head away
when I offer her kindness or understanding.

These small comforts frighten her, like I might
take them away at any moment. In the game of tennis—
I serve her a compliment and she whacks it right back.

Back and forth. I point out how bright she is.
Wham! No I’m not. I encourage her to be open
to friendship and Wham! I don’t. Trust. People.

I ask her to try sitting in silence for a moment.
Wham! She’s out the door. Week after week I
hold her feelings and mine, write note after note.

She keeps coming back but says she doesn’t know why.
Right now this is enough for her, though,
the fact that I believe she is worthwhile, and

will sit with her, no matter how long it takes.
At session’s end, her service dog groans loudly
and our laughter dances out the open window.

Her lips part with effort
as he feeds her, surrounding
her with scents of ginger
and lemongrass from Manila.

Each morning he whispers
her name, cups his warm hands
around her thin fingers,
his smile as bright as a holiday.

He has made her hospital bed
a throne, covering it in gold satin,
scenting it with lavender.
He polishes the chrome bed rail
daily as he would fine silver.
A pile of down pillows
holds her fragile frame
as he reads to her each night
The woods are lovely, dark and deep…

Each night her eyes thank him
for this, his unheralded life.

We sat in a semi-circle,
naked from the waist down,
soft butts on clean linoleum, legs spread
like creamy white butterfly wings.

Safe, effective and convenient,
the silicone cup
shaped like a sailor’s hat
keeps sperm from joining with an egg.

The overall effect was weird,
clinical after the initial embarrassment—
looking in our mirrors as instructed,
appearing nothing like a Georgia O’Keefe lily.

I imagined setting my little cup free
to drift down a slow-moving river,
catching seed-pods and feathers along the way
instead of squeezing it into a damp, unlit passageway.

14 out of 100 who have never been pregnant
or given birth vaginally
will become pregnant
using the cervical cap.

I longed to go back to the rhythm method,
playing the monthly odds like the horses,
savoring the sweet thrill of risk in timing the withdrawal.

Looking back now on a night without stars,
I sit cross-legged on a clean linoleum floor–
one of the safe 86,
never round with life.