What You Long For 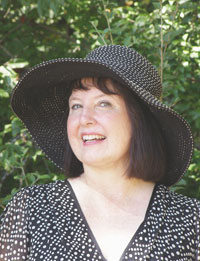 Anne C. Barnhill has been writing or dreaming of writing for most of her life. For the past twenty years, she has published articles, book and theater reviews, poetry, and short stories. Her first book, At Home in the Land of Oz, recalls what it was like growing up with an autistic sister. Her work has won various awards and grants. Barnhill holds an M.F.A. in Creative Writing from the University of North Carolina at Wilmington. Besides writing, Barnhill also enjoys teaching, conducting writing workshops, and facilitating seminars to enhance creativity. She loves spending time with her three grown sons and their families. For fun, she and her husband of thirty years, Frank, take long walks and play bridge. In rare moments, they dance.

Anne Barnhill finds material for her strong stories in ordinary places among unexceptional people. Small towns, suburbs, and country settings are favorites; housewives, children, ministers, and co-workers are preferred characters. Yet What You Long For is surprising at every turn. The author’s frankness, her marksmen’s eye for detail, and her faith that no one is truly ordinary, combine to fashion a vision of life that is serious and humorous by turns–and always sympathetic. Here are stories that call upon a reader to think once, twice, and then say, “Yes–that is true.”

“I have known Anne Barnhill’s work for over a decade. Her stories offer us tenderness, nostalgia, an inescapable melancholy shot through with moments of joy and solace. She takes great care of her characters as well as her readers, allowing us to see ourselves shining through in them. This collection is cause for celebration!”

— Julianna Baggott, author of Girl Talk and The Madam

These are necessary stories — written for the deepest reason: to help us survive the pain of often not getting what we most long for — to love and to be loved rightly. Frank, earthy, wise, tender, funny, sad; these stories remind us that we can survive, even triumph, despite our failings. As one character puts it: “Why, if you don’t have story left, are you still alive?”

Dickhead
Yeah, that’s right-I’m a dick, a rod, a cock, a dorkle, a prick, a pecker, a pole, a sword, a trouser-snake, a joystick-the old one-eyed, purple-headed monster. And I’m telling it like it is, here at the center of the universe, right in the middle of the BVD’s. Hell, they got the Vagina Monologues; I figured it was only fair to me to have a say. Nobody thinks I’ve got much on my mind except a good fuck. But nobody would be wrong. Contrary to popular opinion, I got a lot to talk about; I’d like to see you try to stop me.

First, you got to understand a few things. Me and him–you know, the dude I’m attached to–sometimes we’re connected and sometimes, well, we ain’t. I see the same stuff he sees, but I go my own way and he goes his. It’s weird, I know. But hey, not my design.

Name’s Old Faithful. His woman gave me that title years ago, at least that’s what she told him the other night while she was trying to make him feel better about Their Problem. Said she could always count on me, depended on me really. He never called me much of nothing except Big Buddy. Every once in a while, he’d shout my full name, though–Great God Almighty! I don’t blame him for not addressing me with the whole shebang all the time–that’s a big name to spew out every time he talked to me. And he does yak. He’s like a super cheerleader or something. “Come on, Big Buddy! Get going, Big Buddy!” All that talking and thinking hard can get on a pecker’s nerves.

She’s been talk, talk, talking to him all the damn time-no wonder I’m having a problem. Told him having me around gave her a sense of power; she knew she could bring me to life whenever she wanted-at least, that was the way I used to work. Poor thing. She told him she still needed that power, especially now that her internal clock had changed and she could no longer count the gray in her hair–just too much of it. Then she started tearing up, her eyes filling and overrunning down her face. How the hell can I do what I’m supposed to when she’s all smeary with crying? I mean, I ain’t exactly young myself and she’s putting the pressure on me big-time.
I remembered then how she used to coax me along sometimes. Oh, I always like her coaxing. Sometimes, she’d cover me with food–syrup, honey, cream, even sugar. I wasn’t too crazy about the sugar but in the end, she made everything fine.

He’s a damn fool, though. Won’t talk to her about me. Refuses to explain how I’ve changed, how I can’t rise to the occasion the way I once did, since he hurt his back three summers ago painting the house. Fell off the ladder, wouldn’t you know it. Busted up a bunch of disks. Since then, he doesn’t talk to her much. And when she comes to him smelling all lemony like heavy flowers in August, he tells her he’s tired. Or turns away from her like he doesn’t care what she smells like.