When I Hold You Up to the Light / Doralee Brooks

When I Hold You Up to the Light 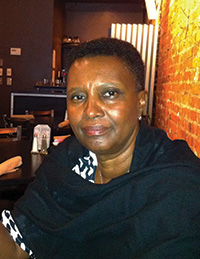 Doralee Brooks lives in Pittsburgh Pennsylvania where she teaches at the Community College of Allegheny County and chairs the Developmental Studies Department. She is a fellow of the Western Pennsylvania Writing Project (95) and Cave Canem (97 and 99). Doralee holds an MFA from Carlow University, writes with the Madwomen in the Attic Poetry Workshops, and is a proud founding member of the (sub) Verses Social Collective. Her poems have appeared in many journals including Paterson Literary Review, Pittsburgh Poetry Review, and Dos Passos Review.

Doralee Brooks’s When I Hold You Up to the Light is steeped in decades of witness—from a childhood edged by segregation; to a coming-of-age animated by consciousness, direct action, and change; to an adulthood alive with language, culture, and complicated heritage patiently teased out. Wisdom and joy inhabit these poems of precision and restraint, where what is left unsaid thrums underneath each sparely constructed line, proving that a “library of doubt” makes faith possible. ~Ellen McGrath Smith, author of Nobody’s Jackknife

This is the worldly voice of a lover of books and music. This is the voice of a teacher, who educates us about race in the minefields of America. In “Homewood Poem,” Brooks talks about Apple Street Mansion where … Roberto Clemente—(they) called him uppity— stayed here/ when even a famous brown face couldn’t guest downtown. Story is held up to light in these beautiful poems of difficult truth—in a humane quest for home. ~Jan Beatty, Jackknife: New and Selected Poems, University of Pittsburgh Press

Are you an Architect?

I recall a line from Ok, Mr. Field, a serialized novel,
as I drive past the now shelled-out row houses on Bennett Street.
Only the exteriors remain.
My college friend, Charles, lived here and complained
when the neighbors didn’t keep up.
In the story, it’s all about the house— house lonely house summer house
white-stucco house on a mountain in Cape Town
that in Hopper solitude overlooks the sea.
In Charles’s room, a paper lantern floated over the bed like a blood moon,
and Stevie Wonder’s Songs in the Key of Life streamed from the walls,
filled every sensation of space.

Back in the day.

Before the Joneses raised the stakes,
and everyday people learned the language of the A.R.M. the balloon-payment.
Before I ever heard someone say house-poor, too much house
Before Detroit evolved beyond Motor City, Motown, blue brutality, Black uprising,
Became the name for collapse.
Before McMansion was a joke—narrow lawn no furniture ghost street no one home—
and the promised invites just another Americanism
such as how are you; have a nice day.

On the cover of the journal I took to Dublin,
shoes, in turquoise, red-soled Loubatins.
On the back, an inscription, Shoes are a girl’s best friend.

Imelda Marcos abandoned 1220 pair in the 1986 unrest.
Which did she choose for exile?

A New York police officer made news
when he bought boots for a barefoot man
on the street in Times Square
one cold November night.

But Jeffrey Hillman hid the hundred-dollar Sketchers.
Afraid they would get him killed, he said.

The shoes—
hidden in his apartment with thirty other pair.

The Shoes—Van Gogh’s still life—
He hiked the work-boots found in a market
through rain and mud.

I realize now I should have asked you about the shoes, the shoes.
You mentioned it, your worry.
You didn’t have them for the dinner, the funeral.

Stranahan, steepest hill in Homewood, pulls
my primary-school bones
like iron filings across an etch-a-sketch
from Belmar at the top to flat Apple Street running
across its base near 7101, Mystery Manor.
Bought by Woogie Harris, the gangster banker, in the 30’s.
In rabbit fur maxi-coats, chinchilla-draped shoulders, jewel-studded
t-straps, and wingtips, people stepped from Cadillacs, Mercedes, Bentleys,
and Triumphs outside the seventeen-room Queen-Anne at any time of day and night
taking whiskey, cigars, poker, and jazz up through
the winding staircase and stained-glass windows to the turreted ballroom.
7101 Apple Street–Mary Cardwell Dawson’s, National Negro Opera Company in 1941.
Mary Cardwell Dawson, teacher to Ahmad Jamal, Bobbie McFerrin
had had to leave Pittsburgh for school,
had had to leave Pittsburgh to pursue opera. Had had had had.
Roberto Clemente—(they) called him uppity— stayed here
when even a famous brown face couldn’t guest downtown.
Homewood, your lore hides in archives—
the Pittsburgh Courier, Teenie Harris’s negatives,
Hides in plain sight—
Apple Street mansion now mountain of decay behind broken iron gates, historic
marker obscured in weeds.
Fading even as I crawl up Lemington Avenue, nine-years-old, in compulsory
leggings and snow boots,
and back down, a breeze kissing the backs of my knock-knees,
skipping in bobbysocks and Buster Brown brogans, mid-June, last day of school
to fourth-grade music and homeroom, to Mrs. Goldsmith.
She stands in front, reads the Old Testament, a wart on her middle finger like a dimpled thimble.
She’d had more in childhood, she wants us to know, had had had,
than we will in a lifetime.
But she didn’t have it easy, she says,
and besides those Black Muslims shouldn’t be allowed to exist.

Downstairs, lights bounce from glass ornaments,
tinsel, the talk of the grown people when they think
we aren’t near.
At the top of the stairs, I angle my spindly legs
to the banister on New Year’s Eve, hear
the sitter’s words,
my fifteen-year-old cousin, in my head:
Doralee, little girls are best seen and not heard.
I watch the dancers to Motown, jazz, Jimmy McGriff.
Ricky, our nineteen-year-old neighbor
with the cinnamon skin grabs Miriam’s waist,
she—the tallest woman
in the room and unfashionably dark—
stumbles back a little
in pink satin t-straps on her mannish feet.
Next year, Ricky won’t come here.
He’ll be at Slim’s, his hangout on Homewood Avenue,
when John who was already working the steel mill
the year Ricky was born,
drunk, warns Ricky away from his wife.
Ricky, laughing, will turn his back,
say, Old man, get on out of my face.
John will return with a Smith and Wesson.
At the wake, Ricky’s mother will say
she dreamt she was mopping
blood, buckets of blood.
But, tonight, Ricky sees me,
grabs me and tosses me up high,
holds me up to the hallway dome light
and says, See, when I hold you up to the light
like this, you’re not so dark.