When Light Waits for Us / Hilda Downer

When Light Waits for Us

The Advance Sale Discount price for this title has expired. For those who prefer to pay by check, the price is $16/book (which includes shipping) and should be sent to: Main Street Rag, PO BOX 690100, Charlotte, NC 28227-7001. 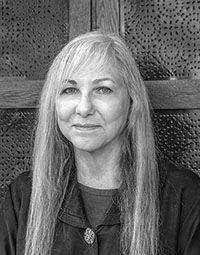 Hilda Downer, a long term member of the Southern Appalachian Writers Cooperative and North Carolina Writers Conference, has an MA in English from Appalachian State University and an MFA in Poetry from Vermont College. Retired from teaching English, she also worked as a psychiatric nurse for over 38 years. Her first book of poetry, Bandana Creek, was published by Red Clay Press. Her second book, Sky Under the Roof, by Bottom Dog Press was a Nautilus Golden Winner. She has published essays and poetry in numerous journals and anthologies. She lives in Sugar Grove, NC.

Hilda Downer’s When Light Waits For Us stirs spirit and body to create new ways to strengthen the miracle of being alive to love and long and lose the gain; then to write meditations on sons and a mother, friends, the poet desiring humanity to rerun its fragile hope that Love is — the answer. ~ Shelby Stephenson, Shelby’s Lady: The Hog Poems

When Light Waits for Us gracefully and authentically delivers miniature portraits of the interiors of a life. These poems celebrate the literary and personal in haunting, meditative, and ekphrastic snapshots. Hilder Downer weaves and blends rich poetic narratives from single moments and lyrical impulses. This collection devastates and delights as expansive and accessible word-art. ~Jaki Shelton Green, North Carolina Poet Laureate

We must “relearn ourselves / with what we have now,” Hilda Downer says in her new collection When Light Waits for Us. Time—in all its countless iterations and absences—bears in on her from every side, all of life an excavation site, a record of who she became and, more hauntingly, who she did not. Even so, Downer recognizes that we live in a “delicate microcosm” where “orchids [are] so specialized / their pollination requires / one particular species of insects.” Her poems assert that we are no different, our souls intersecting, thereby giving us all these ways—music, photography, even poems—to “invent an art to make it worth starting over.” ~Jeff Hardin

Because This Is All I Have

A towel hole
holds its own
against the bright sky.
Broken threads and those tightly strung
could yield music that stops all war.
The magnification of topaz occlusions
or a tree’s intimation of a fairyland
in a telescopic view,
loose ends spread into an alluvial fan
overcome with freedom to be itself.
Past the confidant shadows of the moon,
an alien rover might capture this towel hole
among random photos of Earth.
The pareidolia of alien scientists
would go viral on their social media
with the curvature of one of their own—
proof that they built our pyramids.
An alien heart may never understand
this is but a hole
in a ragged towel,
a cheap curtain,
draped over the bathroom window
by someone settling into loneliness and grief.
This old camper with its own interpretation
of dreams and failure and faded paneling
or my mother rubbing into my face,
“We are the poorest of the poor,”
as though I could never go anywhere.
Grateful then for commodity peanut butter on cornbread,
I still celebrate writing time with peanut butter toast.
A treasure trove bursts at the seams
with not belonging to me
when my gift is seeing rare beauty.
Because this is all I have,
I offer it to you
from this poem’s small, unfurled hand.

Silence is a poverty we can’t see.
Unannounced as an unlit candle,
an old woman stands at our table,
whispers too softly to comprehend
even if it were in English.
She motions toward the girl, about five,
in a dusty dress with a faint print.
The child’s brown stare sees nothing in us.

We don’t speak Spanish
and we don’t speak to each other
long after the waiter makes them leave.
How can we speak
across the great divide of any table?
Cheap souvenirs and my own
hunger during childhood between us,
memory will repeat
this negative of us,
our lunch and their lack.

Memory writes its own music
as I recall my playhouse,
a room of a laurel thicket.
I joined three hairpins
tu dance in high heels across rocks.
We shared a meal at a matchbox table,
balanced on the clean smell of plush moss.
Buttercup plates beamed grains of sand.
I swished the texture of rough light
in my mouth before swallowing.
My stomach, hollow for days,
felt deep as a mine shaft
or the space I was in
before I began this life.

I could give this brown eyed girl
the small bedroom
used as a nursery for my sons,
the loft that spilled Legos and train sets
to palm a miniature tea set on a child’s table.
I might say I will only pay up to a Masters degree,
only to acquiesce later.
But she is already lost to me,
down the streets of another country.
I do nothing and I do it in silence.

If there is help out there,
how to even get it?

I heard a man arrogantly declare
he could have helped Marilyn Monroe.
What about his wife who hung herself
in the house where silence begins?

I have tried to break the silence barrier of my life
in the measure of single poems.
The teaspoons and cups
of lines and stanzas
sift into no more power
to feed the world
than snowflakes
that pat the cliff of indifference
and melt.

When I was in college,
a piece of cornbread cost a nickel.
Often my daily ration,
it was moist inside
and held its crunch on the bottom
even in milk–
just like my grandmother’s.

I know how the sound of air changes
after grandparents die;
how the wood cook stove
no longer warms plates
before serving,
when nothing comes from nothing.
The kitchen table formed an edge.
My mother shunned the tradition
of raising a garden and canning,
but kept the mountain way
of not accepting charity.

Old anger becomes tired.
I let it go like a firefly
to flicker out beyond reach.
My own table has marked
a kind of forgiveness
as I wrote monthly checks to my mother.
She never went hungry again.

The time you and I forgave each other,
a door of my soul opened
into another room of starlight.
There, my failures across a table,
hairpins danced above
like notes of Grapelli’s Shine song.
As we walked outside, a yellow maple leaf
on a magic carpet ride
smacked a kiss against my face.
It twirled by its tiny wrist
until it spun into gold.

Message to the Unborn

A sign saddles the chain
across the strip mine road:
Do Not Enter.
Feldspar exposed as upturned petticoats,
woods still in shock,
blackberry seeds, carried
by the faith of birds,
are the first to claw
the edge of newly impoverished soil.

Anything battered offers
what might be liked better
when diverse forest
was not good enough,
forsaken for rock exploded from beneath.
Still, there is always a price to pay,
even while cobbler
bubbles purple over a browning crust
or a timber rattler stumbles into the clearing,
unable to discern,
amid thick berries,
a bird from a small hand.

Eventually, black birch
stamps out the blackberry stand.
A few white pines foot in.
A vertical mine shaft
engages a water table
and spills over, bleeding rust into the creek.
A horizontal shaft caves in
under the pressure of dairy cows,
and another surfaces open as a gaping whale
outside a potter’s shed,
where the hole adapts
to thrown shards.
Newly dug wells bubble with arsenic.
Sweet stems of the birch remain
for chewing during walks.
But heed my words:
never
will the quiet
notes
of a
Solomon’s seal
lilt here
again.

The delicate microcosm of humus,
refined by fungi symbiotic with forest roots
into the nutrients and exact pH,
yield orchids so specialized
their pollination requires
one particular species of insect.
Farther below, blue and green gems and quartzite
stretch fingers of illumination through bedrock
with a magnetism generated
by planets and stars shifting millions of years
into beauty to balm this truth.

Generations away,
no white trillium
will be allowed to offer its hope
against the charred forest floor.

So many people in the world,
souls leaping in quickly
to grasp the last opportunity to live,
born into suffering.
This is not living.
I want you to live,
to taste huckleberries on your walk,
to smell the negative ions on the cliff
above the roar of the river gorge
with the feeling of peace pulling you back.

I want to give you more
than what I came with,
but the acid sky and
metallic ocean will burn
the earth down to more darkness
than a lonely mine shaft could ever dream up.
After the paintings and books are gone,
can your souls
invent an art to make it worth starting over?
Listen while poetry still
circles you like a moon.
Know that you are the ones
I have always spoken to.
I wanted you to find hidden places
that you would love—
inside rooms of rhododendron
or where miniature yellow lady’s slippers
grow in limestone-rich soil.
Know that I love you,
that I want to meet you,
and that I do not want to bear this cruel message:
Do Not Enter.