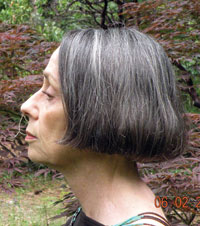 Sally Allen McNall has been a student, written and taught in Oregon, Arizona, Kansas, New Zealand, Ohio, and California. Her father was a geologist and drove her all over the Western states before she was fifteen. She began publishing poems in 1985, when her youngest child left home. Her chapbook, How to Behave at the Zoo and Other Lessons, was a winner of the State Street Press competition in 1997, and her first book manuscript, Rescue, won the Backwaters Press Prize in 1999. For the next decade she wrote infuriated poems. A chapbook, Trying to write a poem without the word blood in it, came out in 2005 from PWJ Publishing. Many of those poems still feel important.

She lives in the foothills of the Sierra Nevada with her husband and their two intense cats. Though they are retired, she and her husband teach a university class about the environment and the climate crisis.

Sally McNall’s poem advises, “Descend the Fallopian tube. / Be the forest canopy as it ignites.” She warns, “Your heart will be used against you.” In these poems of fury and sorrow and love, McNall’s global political conscience follows the “loser army” that history is, charting bitter human atrocities and acknowledging the losses we’ve not yet begun to imagine. “Every city wears its poor like a broken halo,” she writes. Knowing that, how do we, in the midst of wildfire, war, drought and flood, keep the soul alive? For McNall that process involves argument, cynicism, travel, history, torn geographies of land and heart. In the end, she leaves us in the company of lovers who value the collected wisdom of millennia, looking things up, reading, thinking, talking, writing.

Each page in Sally McNall’s Where Once holds fresh surprises. These expansive yet intimate poems never go where you expect them to, yet they always go somewhere, and—best of all—they aim to take you with them. Pack your bags: these are moving poems, not content to sit still, and their reader will not be unmoved.

Sally McNall’s new book of verse reestablishes the necessity of the poet. Her words have global reach as she considers, for example, Scotland’s Black Isle and Texas oilfields in the same breath (“Harvest”). This prophetic poem about the oil industry’s environmental effect is one of many that engage readers with critical issues of conscience. Always the body, mind, and spirit of the narrator create personal tension. The language is finely tuned and persuasive. Where Once is an important guide to the 21st century. It is essential reading.

Each is stained
a different color,
shades of indigo and violet
none pale

They are fashioned
of heartwood,
oiled, heavy,
never softening
to the touch

for A
Yes, but in this book of horrors you refuse,
this documentation of systematic, categorical death,
writer and reader must step back, if only a step,
or tenderness could not touch the dead, as it must.

Remember the green eyes of the Afghani girl
on the magazine cover, at the beginning,
and how when they found her again,
well before the end, she was already old.
Remember the picture on the Internet?
We never saw her in the midst of life,
remember? So what do we have to go on
but the effort of thought in the unmapped darkness?

MAKE YOUR ANSWER A STORY

Give me the particulars, I say, bone,
blood meeting the air. Describe
famished flesh eating itself
I say, and the odorless colorless
poison entering one cell
on the surface of the tongue,
one mouth, how it is sped
outward by contact, rumor,
in the air, and in a form of words
hastily assembled long ago
for a different purpose,
now lively venom, vaccine
against hope. Tell me how you live,
I say. What act, what room
in your days do you call
ease? What is pleasure?
How is each transmitted?
You must indicate
the worth, the consequences
of what delicacy you have taken for yourself,
how the quiet was paid for
and who helped you.
Make your answer a story,
make the people in the story endlessly
recognizable, loveable even, make them long for peace,
make their bones tremble where they are hiding,
make their blood full of longing. Begin.