The Advance Sale Discount for this title has expired. For those who prefer to pay by check, the price is $16/book (which includes shipping) and should be sent to: Main Street Rag, PO BOX 690100, Charlotte, NC 28227-7001. 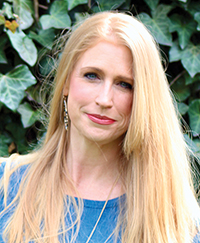 Elizabeth Johnston Ambrose lives in Rochester, NY, with her partner, daughters, two dogs, and three cats. Her writing has been nominated for three Pushcart Prizes and a Best of the Net award and has appeared in The Atlantic, The Sun (Readers Write), McSweeney’s Internet Tendency, Rogue Agent, The Belladonna, Emrys Online, Room, Women Studies Quarterly, and Feminist Formations, among others. She teaches writing and gender studies at Monroe Community College and SUNY Brockport. Her second chapbook, Imago, Dei, won the 2021 Rattle Chapbook Poetry Prize, and is forthcoming Winter 2021.

Consorting with myth, literary lineages, politics, pop culture, and more, these poems engage and surprise. Gendered roles and dusty archetypes are toppled by swift kicks, delivered with tragicomic wit. Persephone goes shopping, Medusa grooms for a blind date, Barbie gets bawdy. A chorus of crucible figures lead us through poems at once raucous, layered, and tender. They discover freedom for the salvaged self, compassion for the marginalized, and condemnation of the brutal. ~Willa Carroll, author of Nerve Chorus

Wild Things—Johnston’s first and wholly distinctive chapbook—opens by citing the initial lines of Adrienne Rich’s iconic poem “Diving into the Wreck.” This decision makes sense: an important aspect of Wild Things is the reclamation and reframing of myths and narratives where women and non-human females find ways to confront and deflate oppression. But Wild Things is so much more than this. Always intelligent and in some cases devastating, Johnston’s best poems assert themselves with deadpan force. ~Tony Leuzzi, Meditation Archipelago

Where the Wild Things Were

~Tennyson, “The Lady of Shalott”

When, long ago, he wore her down
and wanting love, she promised vows,
a forest grew inside her bower,
a web of vines, so many flowers
the walls a world around her turned,
for wild things no longer yearned
and she saw only shadows,
in the mirror only ghosts.

‘Til one day from far away,
she heard a song, a wild song,
a wild, dark, and drowning song,
and then she knew, as some wives do
a curse was on her if she stayed.

And so she crept to siren’s shore,
unloosed a boat, and rowed unmoored
into the noises of the night,
so buoyant was her sense of right,
so desperate was her moonlit flight.
Now done with compass, done with chart,
led only by her thrumming heart,
she sailed through months, and weeks, and days,
through parted willows, fields laid waste,
until at last she found that place,
where creatures horned and snaky-haired
dance a wild rumpus.

And she thought not of right or wrong,
at last was certain she belonged
among the howling, sharp-toothed throng,
the triple-headed beastly strong.
She stayed awake the whole night long.
She ate their feast and sang their songs,
and to the cadence clapped along
and she knew all the words because
once even she was wild.

But when he found her empty room,
the mirror cracked, the lonely loom,
the water lily’s wild bloom–
his heart grew faint, he flashed his sword,
he swore an oath, and called his horse,
and rode down to the sea, of course,
for, prince or no, he needed her
to love him best of all.

He followed and he found her there.
Her eyes were black, and loose her hair.
She sang in tongues, she raged, she raved,
but he was strong, and he was brave
and knew the words to break the spell,
to ward off wild, make her well–
And so he took her hand and cooed,
But what is here? And who are you
to moor in such a wild space?
This tender heart, this lovely face?
This dark and darker savage place?
His dinner cold and left for waste
back home where she belonged?

And though she gnashed her teeth and cried,
and roared her roar and rolled her eyes
and even tried her song to sing,
it was a terribly futile thing.
He did not blink, but said: Be Still.
And tamed her with his trick.

Yes, we know how this story goes:
the bride who runs, the girl who roams,
how in his arms he’ll bring her home,
like Peter to his pumpkin shell,
like Jacob with his bride in veil,
like Hades to his ghastly hell,
and in his tower keep her well,
and sometimes let her story tell
his wild thing, he loves.

My Barbies had a lot of sex.

Of course, they also did what other Barbies do:
walk down the aisle, attend the prom,
ride horses, birth babies.
It was the 80s.
My parents couldn’t afford the corvette, so
Barbie and Ken jetted around in a roller skate,
flaunted fashions scissored from socks,
at night, got tucked into a shoebox
bedded with washcloths.

But there were other ways to play:
Captive Barbie, stripped and stuck
in a parakeet’s cage;
End-of-Days Barbie, the world exploded
and survivors forced to repopulate;
Polygamous-Ken and his multiple wives
who comforted each other but refused to revolt.

When I turned ten, my mother baked a cake,
plunged Barbie in its frosted petticoat
waist-deep. I opened gifts—a Michael Jackson
Beat It doll, red Michael Jackson jacket.
We moonwalked across the grass, grabbed
our crotches. Then the neighbor boy grabbed me,
pushed me up against the house, stuck his tongue
in my mouth. I liked it but squealed and screamed
the word I’d heard watching Donahue with my mother:
Rape
He pushed me away and went home.

That night Michael Jackson stripped and slipped
into bed beside Malibu Barbie, placed his stiff
gloved hand on her hard, nipple-less breast.
Midge and Skipper rattled inside their boxes, scolded:
Ken won’t want you now.

It is an appropriate thought to admire a celebrity’s nose, or eyes, etc., as an ideal or desirable look, ~Michael McGuire, MD, president of the American Society of Plastic Surgery, in “Top Ten Most Coveted Celebrity Body Parts”

She pursued her undertaking
as in a fever,
deprived herself of sleep,
fingers frantic, flipped pages,
clipped, collected
as from a slaughterhouse
scraps of hallowed body parts:

Binder full, she bore it like a corpse,
cradled hope profane,
begged her surgeon to infuse
into her tortured soul–
life.

She had lost all sensation, there
in the solitary chamber of her heart,
could not another day endure
the wretched reflection,
so much did she loathe

its shriveled complexion,
its dull and watery eyes.