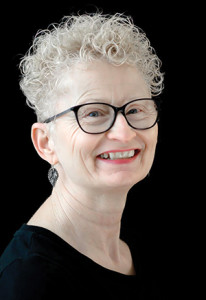 Kelly DeMaegd was born in Missoula, MT and raised in Alpena, MI.  She was educated by western Montana lumberjacks, Great Lakes sailors, limestone quarry drillers and drivers, Minneapolis cabbies and steelworkers from Detroit, Toledo, Gary.  Her poetry has been nominated for the Pushcart Prize and her work has appeared in Wild Goose Poetry Review, Vox Poetica, Your Daily Poem and Bloodshot Journal of Contemporary Culture.  She helps facilitate the ekphrastic poetry series, Art of Poetry, at the Hickory Museum of Art.  She is a retired corporate executive living in Sherrills Ford, NC with her husband, Gene.

Evocatively imagistic, psychologically probing, and tightly written, these poems, each one a gem, are pleasing to the viewer, the thinker, and the reader in me. Rarely today do I encounter a book where every poem is as satisfying as the one before and after it. Wish and Spit consists of such poems. Then, taken together, they tell the story we all must tell, the one about how to discover, enact, and maintain personhood in the 20th and 21st centuries. Wish and Spit is the finest first book I’ve read in many years. –Scott Owens

Once she drove over the Continental Divide
her body, mostly water, lost its orientation.
She traveled east, crossing the Mighty Mo,
Big Muddy, to the northern shore
of Lake Huron. A mooring that pitched
and yawed on wind-whipped swells.
Like ancient cultures before,
horizontal made my mother nervous.

She spoke of Homer’s earth-encircling sea,
longed for familiar vistas, stitched
scenes of home using hoop and needle.
Pillowcases adorned
with trillium and lupine,
flowers that thrived along
native mountain streams.
Just before her break,

when waking waves heaved,
when furled ferns poked
through sun-warmed humus,
she embroidered
a Braille of French knots
into the stems and petals
of Montana Bitterroot, a blossom
known to survive a year without rain.

swallowed her pride, ordered
a store-bought cake. All afternoon,
atop its crystal pedestal

the exotic confection taunted.
My brother and I caressed
its paper lace petticoat until

we were chased from the kitchen. After
dinner, without hesitation, our father
requested a slice of yesterday’s pie.

If This Were My Last Day

Just before midnight I would look
each of you in the eye, confess
that even though it’s my last day,
you, in your own way, have saved me.

there is nothing like cruising the hills
between Greenbush and Black River
midnight, full moon, headlights off
driving Ron Connen’s shit-brown
hunting camp car, windows down
smoking a bowl of his brother’s
stash pilfered last week while listening
to Zeppelin, wearing patchouli