With the Memory, Which is Enormous

* * *This title was selected for publication as a result of finishing as a runner up in the 2008 MSR Chapbook Contest.* * * 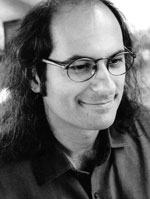 Tony Trigilio is the author of the poetry collection, The Lama’s English Lessons (Three Candles Press); the chapbook, Make a Joke and I Will Sigh and You Will Laugh and I Will Cry (e-chap, Scantily Clad Press); and two books of criticism, Allen Ginsberg’s Buddhist Poetics (Southern Illinois University Press) and Strange Prophecies Anew (Fairleigh Dickinson University Press). He is co-editor, with Tim Prchal, of the anthology, Visions and Divisions: American Immigration Literature, 1870-1930 (Rutgers University Press, 2008). He teaches at Columbia College Chicago, where he directs the program in Creative Writing — Poetry and co-edits the poetry magazine Court Green.

You learn Steelers players’ names
whether or not you want —
Mean Joe Green, Rocky Bleier,
even Frenchy Fuqua —
read Burroughs (Edgar Rice),
write research papers about apes.
Say “the SLA” instead of “God”
during the pledge of allegiance,
which makes Mike laugh
even though he doesn’t know
who they are. One day
you tell him it’s not funny
anymore and from now on
it’s “Patty Hearst” instead —
finally just calling out
“One nation under Tania”
rising to salute and pledge
before morning announcements.
You go back one weekend
ten years later and burn
the mayor’s campaign signs,
your former high-school principal,
flames cracking foam-core
the way William Burroughs’s
plankboard voice ate Tangier alive,
saying he’d suck the American flag
if it were soaked in heroin.

He peed outside his house, in the narrow passage
next to where the Iranian family lived,
because his family’s bathroom was too dirty.
His sister, Marlee, yelled at us to come inside
because their dog, Butchie, died right then,
on his side, next to the coffee table, an incurable
string of yellow spittle from his mouth,
still wet (later we touched it), which made you think
Butchie just needed a breather from chasing rabbits
and would get back up. Marlee walked around
the living room looking for a pack of matches
in nothing but her boyfriend’s work shirt,
twice her size. She scratched her hair as if to start
a fit — that shirt rose and revealed everything,
and I nearly missed it, scared by the common jangle
of her father, the truck driver, wide awake and rasping
down the hall because we played Nazareth too loud.
I knew he had come back from a week on the road
because his cab was parked sideways on their lawn.
How could anyone tell this man his dog just died?
Dougie and I went back outside so he could finish.
My feet raved through clusters of leaves, the truck
tires taller than me, and Dougie stared
at the siding as he pissed against his own house,
angled three-quarters away from me.
I tried to remember Marlee’s shirt ascending again,
slower this time, proud of its sleight-of-hand,
revealing, I thought, a G-clef — not flesh or lips,
but a wayward punctuation mark below the swoosh
of her denim shirt, its pitch beyond me
and what was left in their living room, Penthouses
and ash trays scattered on the glass coffee table top,
some poker chips, Butchie dead, a crusted shot glass,
empty Coke can, a Mott the Hoople album
someone forgot to put back in its sleeve.

In the hallway Jeremy took out his keys. He reminded himself it’s the large red one for his office. He was returning from three weeks’ vacation. Twenty years ago a person could disappear, but not now. He opened the door. A pigeon sat in his open window. It moved and Jeremy thought it was a rat. He remained as cool as he could, under the circumstances, and took a few steps in the room. It flew away. He must have left the window open the day he left. His dime-store Perry Mason paperbacks were scattered from their windowsill. His martini glass was broken. He kept calling it “my martini glass,” and it was broken. Pigeon feathers scattered half the office. Pulps of bird shit below the window in scatty layers on the carpet.

Tracking down an underworld songbird named “Big Steve,” he put him on the business end of a revolver and pumped him for the dirt he needed for the case. In “The Case of the Terrified Typist,” he played a mean game of cards, shrewdly bilking a professional gambler out of some IOUs that belonged to one of his clients. He met his nemesis while on leave from the army, a beautiful, insane young woman who was the wife of a socially prominent New York architect. The girl made a noise. A fluttering, school-girl giggle. The heat of her body reached out for his hands. She wasn’t wearing much beneath the skirt. In an instant it was all over. The bird lit a cigarette and started dressing. All right, so she was crazy, the leggy dame. That’s her business, not mine. He dashed the martini glass against the wall, lost control of his bowels, and flew from the window into the night. Flapping in a big whiny brood.

“Off pecking a corpse for all I know,” Jeremy said. The bird kept coming back. “Suits me,” he said. Jeremy shoveled shards of glass into an inter-office memoranda envelope. It pranced the concrete windowsill outside, then jumped to the bottom edge of the open window. Some kind of huckster. Once Jeremy thought the bird was leaping straight into the office, but the pigeon flew away. Then came back again; agitated returns, curt guttural flusterings. Jeremy said the word “barbarian” for no apparent reason, no one there to confirm this was the right word, the ironic one, to use when a pigeon displaces your office. The bird leaped to the top of the windowsill. Then a defiant stroll atop the radiator, like he’d just cleaned out the nearest crap table. Jeremy froze. “Easy now, baby,” he said. The pigeon flew away again. “It’s all dirty now.” Then he saw eggs, three in a half-nest crouched underneath his desk chair. He shut the window. Turned off the lights and sat on the floor. She could never come back now, he knew. It’s all dirty now. His fingers crimped a tuber of straw from the incubating wreath she stitched below his chair, each egg patient as a sheet of ice. That’s the way it is with guys who haven’t seen it before. Violent death is a lot different from any other kind. It is something else again.