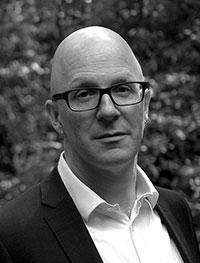 Gary Hawkins is a poet, teacher, and scholar, who grew up in the suburbs of the West. His poetry, translations, pedagogy, and criticism have appeared in Virginia Quarterly Review, Forklift: Ohio, New European Poets, Third Mind: Creative Writing through Visual Art, Emily Dickinson Journal, Los Angeles Review of Books, and other venues. He teaches creative writing and serves as associate dean at Warren Wilson College; he sets type in the letterpress studio; and he lives in Black Mountain, North Carolina. With his wife, the poet Landon Godfrey, he edits and produces Croquet, an occasional letterpress broadside delivered as a postcard.

Worker pierces the temper of our times with poems that embody conscious electricity, and the arrangement of nerves in what we know as work. The poet pulls back the covers on what originates in the body to show us as we are. With an alacrity and wisdom of a slightly modest lightning bolt, Hawkins invites us to claim our certain beauty, as he gives us the gift of a wonderful debut collection. —Afaa M. Weaver

Gary Hawkins’ re-invention of Psalm 13 ends as only a psalm of this century could: How long in the rains will you hide your sweet face?//I am nothing: You are nothing./ I cast my worth into your wake. In his densely peopled book, a host of characters go about their ordinary business—making love, shopping, repairing the house—while Hawkins ‘casts his worth’ into them; any of these people could be him, or us. —Mark Doty

Into every storm he appears,
curbside in his dark suit,
dark cashmere socks, snow-dusted Florsheims,
a tender arc to his back,
as he meticulously scrapes
his frosted windows with the fine edge of a credit card
while snow continues to accumulate
and the vapor of his idling sedan
drifts, almost like a blanket, over him
until you think, Shouldn’t he have it right by now?
How is he fit to survive a storm?
forgetting that inside the car the seats
are toasting and a hot wind rolls from the dash
opening a clear view over a world
that the city plows before him,
through the side streets he follows
in the troughs of others’ tires, to the parking lot
where he gently slides one foot
and then the next into a line
of footprints laid out like perfect collapsed slippers
up the carpet, ghost-white marks melting
into the revolving door and the final flakes
stamped off in the lobby bar
as he curls up, warm, beside the fireplace, his whisky,
neatly disappointing Darwin, yet again.

I am that man, my darling,
tailored, frozen, undeterred, unevolving.
Come down the grand staircase
to meet me.

Today, another workday, and I wake up
on my back. The neighbors creak above
like sparrows. I pull up my blankets,
tarps against a storm.

And today’s another workday, so I rise,
and it’s still night. The shower rains
like misery, while the plumbing
beats its wife.

Another workday, and I am hurrying
down the walk. With my coffee, I busy
through the classifieds until the counter crowds
with suits, beetles devouring lunch.

Another day at the salt mine,
then through happy hour I lap the block
when I pack on the bus back to the suburbs
with all my comrades, the chimps.

Today, another workday. I am
ready and awake, tying
a four-in-hand in the dark,
aping each step till I get them all right.

You’d know every tool had its use,
His workbench a table laid with silver.

You’d know each movement had to match the rules,
His workshop a dark etiquette for you to master.

Take, for instance, the array of hammers
Fanned across the shopcloth linen:
Those for framing and those for tacks.
Lift them. Weigh their fit in your small palm.
Twenty ounce, sixteen ounce, ten ounce, seven.
Match the diameter of the face to the diameter of the head
Of the object to be struck—and hear how you get it wrong:
Why don’t you just hit it with your purse?

Consider next such forked dilemmas as:
Scratch awl or bradawl; countersink or center punch;
Sheet metal or machine screw; Phillips head or slot.
With the sharp tip, you make your mark.
With the sturdy point you strike.
You apply rotational force in a clockwise direction, simultaneously
Directing pressure into the material to be fastened—and you fail this art:
Aren’t you my right-handed son, and not the wrong one?

He had his right way. You knew a better one.