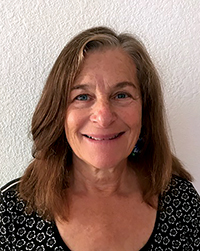 Sandra Anfang is a Northern California poet and visual artist. Her poems have appeared in numerous journals, including San Francisco Peace and Hope, Unbroken Literary Journal, Rattle, and Spillway. Her chapbook, Looking Glass Heart, was published by Finishing Line Press in 2016. Road Worrier: Poems of the Inner and Outer Landscape, was released in 2018 from the same publisher. Sandra has been nominated for a Best Short Fictions award and a Pushcart Prize. She is founder and host of the monthly poetry series, Rivertown Poets, in Petaluma, California, and a California Poet/Teacher in the Schools.

Sande Anfang has wandered far from her Jewish New Jersey roots, eventually transplanting herself to the Golden State. On the evidence of her new book, Xylem Highway, it was a wildly successful venture, for she seems as cheerfully at home in her chosen landscape as the ubiquitous gum tree. Opening with a celebration of the bristlecone pine, as old as the redwoods but not nearly as majestic, she embraces life’s variety, all of it worthy of praise. A latter-day Wordsworth, she invites the reader to join her on frequent visits with her “relatives”—Hedge Nettle, Miner’s Lettuce, Wild Geranium—in California’s hills, where every step is a blessing. In beautifully measured free verse, rich with vivid imagery, she celebrates life’s vicissitudes and abundance. A counterpoise to our age of political darkness, this book reminds us of larger affinities and consolations. ~Lee Rossi

In Xylem Highway, Sandra Anfang takes us into the very juices of the natural world, leads us with her subtle language and urgency of life force, to travel the inner byways of flora and fauna, where she clearly feels at home. From there she can view her life, and we ours, with fresh perspective, even to the schoolyard bully and the remembrance of the Holocaust. Here is a poet whose understanding, and questions, are cellular. ~Vilma Olsvary Ginzberg, Healdsburg [CA] Literary Laureate, 2008/2009, author of making noise, and 90 is the new

Dwarfed sentry
twisted under millennial weight
trunk wrapped in shrapnel
like my sister’s husband’s calves
pegged with the purple heart of Vietnam
regard me with the weary eyes
that recorded the building of pyramids
Pharaoh’s workers raising the walls
brick by tortured brick.

Something in the DNA of slow-growing cells
stunned molecules that cup the seeds
will themselves to sprout;
memory captured in the slotted eye
five thousand years of stills
before we set foot to trail.

Named for the bluish spurt of needles
in your ingrown cone
deformed in the Dada style
like a Thalidomide arm
bristling with the light of eons
you have seen it all—
drought
flood
fire
and plenty.

As the aging tissue dies
take the slim xylem highway
that runs from root to trunk.

Scrappy flesh
holds no candle to Sequoia—
all flash and razzle—
you are the Gandhi of trees
your story penned in tiny whorls
the wrapped and rip-rapped
gyrus and sulcus of your dun dermis
arching up from talus
just below the tree line.

Zen eunuch, you who have seen it all—
drought
flood
fire
and plenty—
bear stigmata in your pith:
carved initials
and a weathered shoe
toe upturned in mock surprise
your Sancho Panza on the trail.

Jane described how scientists scoffed at the notion
that animals feel emotion.
Where’s the data? they asked but didn’t really want to know.
Those Bonobo utterances are just reflex sounds, random squawking.
The concept of personality is null.
I mull this over during the meditation part of the service
while my monkey mind is supposed to be at rest.

The air outside the chapel is calm;
a few trees clear their throats in the yard
while others shoot the breeze with the hillside.
The church babies debate the pros and cons of parents
adventure, right livelihood
while we continue to breathe, eyes closed.
I can gauge their evolution by the changes
in their vocalizations.

Gone are the cries of anguish, the frustrated whines.
There’s a friendly ebb and flow between elders;
these folks have time on their hands.
The occasional crescendo tickles my ears
an enlarged syllable for emphasis
held down like a pedaled piano key.

Theirs is a foreign tongue, Turkish perhaps.
I marvel at its economy and expressiveness.
On the other side of the world in the Congo basin
waking from green dreams
Bonobos call to each other
across the forest, making plans.

Each day I wake
expose the winter of my heart
to immutable skies.
Barren trees
desiccated shrubs
starved soil
don’t seem to care.
I can’t flush this anger;
as the tank is emptied, it refills.

I sleep for an hour by the roadside
the restless infant sleep of windblown leaves.
All too soon I’m jarred awake
shot from grief’s cannon.
Last night I dreamed of a woman
who tried to mask a scar
wide as a scythe’s blade
behind a bile-green cowl.

The heart casts its own shadow
plunges the forest in darkness.
Once savage meant wildness;
now it’s nothing but brutality.
I smolder under the weight of this mask
tear it from my face
grind it beneath my heel
salvage what little wildness
the earthworms will lend me.