You Belong to Us

On April 5, 1970, Molly McCaffrey was born in a Catholic hospital and given up for adoption when she was six weeks old. Nearly thirty years later, she met her birthmother who had spent the time since McCaffrey’s birth working at that same hospital, in that same ward—labor and delivery—wondering what had become of the baby she had long ago named Anne Marie.

But something else occurred shortly after McCaffrey’s birth. Her birthmother married her birthfather. And together they had four more children, giving McCaffrey an entire biological family she didn’t know existed. A family that owned a biker bar. A family that karaoked together. A family that gave each other guns at Christmas. A family that she had virtually nothing in common with.

You Belong To Us tells the story of McCaffrey’s attempt to connect and find common ground across that span of years as well as class and educational lines. The book follows more than a decade in the lives of her unconventional family and asks the question that lies at the heart of adoption: Do we belong to the people with whom we share our blood? Or do we belong to those who raise us? 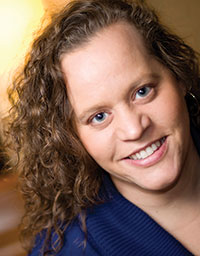 Molly McCaffrey is the author of You Belong to Us (memoir) and How to Survive Graduate School & Other Disasters (stories). She is also the co-editor of Commutability: Stories about the Journey from Here to There and the founder of I Will Not Diet, a blog devoted to healthy living and body acceptance. She received her Ph.D. from the University of Cincinnati and had been nominated for three Pushcart Prizes, an AWP Intro Journals Award, and Scribner’s Best of the Fiction Workshops. She currently teaches at Western Kentucky University and works for Steel Toe Books in Bowling Green, Kentucky, where she lives with her husband, novelist David Bell.

A bare-naked plunge into the murky waters of nature, nurture, and an adopted daughter’s search for her true identity. Molly McCaffrey has written a brave and important book. —Joe Blair

McCaffrey holds nothing back. This compelling memoir deepens questions about nature versus nurture, forcing readers to confront sides of themselves they may not have previously known or acknowledged.  —Tom C. Hunley

I met my biological mother at an airport in Dayton, Ohio, two weeks before my thirtieth birthday. On that cold March morning in 2000, the fluorescent lights in the terminal were buzzing overhead like thousands of tiny bees. Buzz off, they were saying. It’s not too late. What are you doing? Get out of here! But I didn’t listen. How could I? The woman who had given me life was on a plane headed in my direction. She had told me her flight information, and I said I’d pick her up. We had made an agreement.

Explicitly we had agreed to meet at the airport, but implicit in that agreement was another: from then on, we would be a part of each other’s lives. So what kind of person would I be if I just left? If I wasn’t waiting—as promised—when she got off the plane, I wouldn’t just be abandoning her at the airport. I would be cutting her out of my life. Probably forever. In other words, I would be a bad person, and I had never in my life been a bad person. So I remained in the airport, waiting for a plane from Virginia to arrive. And I tried my best to ignore the buzzing in my head that kept telling me I was making a mistake.

And that’s when I began to panic. The bright overhead lights, still talking to me, were making me feel light-headed, and my insides had been set on spin cycle ever since we’d left the house that morning. I turned to my husband and said, “I can’t do this,” as I tried to calculate if there was still time to change my mind.

“You don’t have a choice,” he said without hesitation.

“Are you sure?” I asked, looking into his watery eyes and hoping to find a way out.

“I’m absolutely sure,” he said, not willing to offer me the lifeboat I was so desperately seeking. “It’s too late to get out now.”

“You’ll be fine,” he said, patting my back and raising his head to look for the woman coming towards us, the woman who had given me life.