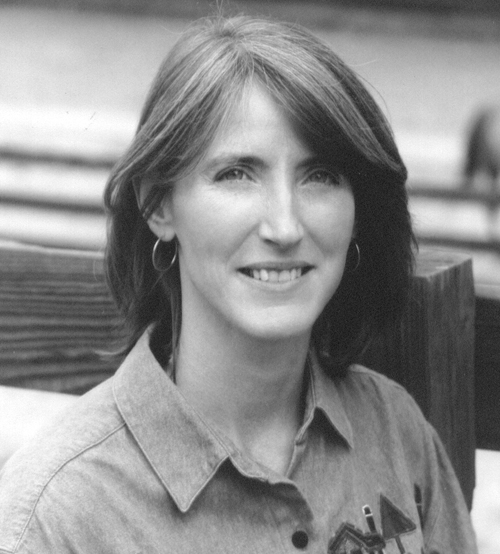 Formerly a magazine and newspaper editor, Ann Campanella turned to creative writing because of the need to focus on things that moved her. Twice, she has received the Poet Laureate Award, the highest honor of the North Carolina Poetry Society. Her poetry was selected for the Blumenthal Readers & Writers Series by the North Carolina Writers’ Network. Her writing, nominated for a Pushcart Prize by Main Street Rag, has appeared in local and national publications and anthologies including Chelsea, Crucible, Earth and Soul, Iodine Poetry Journal, Iris, Kakalak, Pembroke, Southern Poetry Review, Tar River Poetry and many others. Campanella has a degree in English Literature from Davidson College in North Carolina and lives with her husband, daughter and animals on a small horse farm in Huntersville, North Carolina.

In the poem, “Six Days on the Road” from Ann Campanella’s wonderful new book of poems, Young & Ripe, the speaker, who has been riding in the cab of an Australian semi, says, “He never laid a hand on me/even though I was young and ripe….” And of course, that is the subject of the book, the speaker’s life from early childhood to early marriage, her time of being young and ripe, her life “graced with something wild,” but still somehow safe and able to use this freedom, this wildness to grow, to learn, to change and to become the woman she is today. This is a lovely, perfectly unified book that takes us on this special journey, where “we can only grow by inches/yearning for sun, thirsting for rain.” You must read it from beginning to end.

Like Blake, Ann Campanella insists on a life in which innocence and experience sometimes tangle, sometimes peacefully coexist. For her, childhood is a time spent “searching/for roly polies, plucking the stems/of lilies for wands and swords” while poisonous frogs and storm clouds gather. Adolescence means a journey to places like “Cat Scratch Canyon and Suicide Ridge” where danger and safety are almost indistinguishable, where a female hitchhiker finds refuge in the “metal womb” behind an Aussie trucker’s cab. By the end of the book, the persona carries her youthful mistakes “in a small papoose/just above [her] breast bone” but reminds herself and the reader that true grace comes in embracing “something wild,” in bursting “from these pods.”

Echoes of my Florida childhood
when wind sent palm fronds
flying, uprooted oaks.
Cups of air spun wildly
as my brothers and I
hunched for hours
near a black box,
watched the red needle
of the anemometer soar.
From our windows
masked in taped Xs,
we saw black water rising
in the street. I remember
my father standing in a boat
paddling between houses
and twisted trunks of trees,
through tails of Spanish moss
braided tight as rope.
Once, when the eye passed
over, we blew out
our candles, walked
through the slamming
screen door into
our backyard and
marveled at the blue
hole of sky above us.

It was a place where families lived,
house after house of neighbors.
The Florida heat, a perfect
greenhouse for children.

Spring and fall, I crept along the side wall
and under the azalea bushes, searching
for roly polies, plucking the stems
of lilies for wands and swords.

We played in the vacant lot a block away,
carved paths through the weeds,
built forts and pretended to be soldiers,
bringing home dirt-stained faces
and green on our knees.

My sister, on the eve of womanhood,
twirled her baton on the sidewalk
in front of our house,
spinning and tossing silver
over her head.

Long summer days, my parents played
tennis in the street – no nets,
just a pair of lovers volleying
a soft worn ball back and forth.

One winter, on the coldest night,
we turned the sprinkler on the weeping willow
in the corner of our backyard, woke
to a cave of stalactites, drooping limbs
bathed in rime, a fairy tale castle of ice.

Even decades later,
as the sun falls from the sky,
I remember streaking down the street
on my banana seat bike as the sky browned,
mothers standing on front porch steps
ringing dinner bells, calling us home.

We park at West Riverside Elementary,
follow the octagon sidewalk.
My brother knows the way and I trust him
like I did when I was six.

The route feels familiar under my shoes,
although I no longer have to stretch
to avoid the cracks.

Back then, I’d tag along,
watch Bill and his friends kick
a rock the entire length of a block
beneath moss-scarved oaks
familiar as aproned aunts.

We pass the ivy-covered house.
(Could it be the same ivy?)
Then we come to the hill. No one believed
my brother when he said there were hills in Florida.
Now he admits it’s only a slope.

The horse-head hitching post
that marked the halfway point still stands
although someone has painted it white.

We cross the creek at Willow Branch.
I remember how my legs ached
from squatting on the banks,
scooping tadpoles into Dixie cups
to fill our aquarium.

A block from the old house
we find the sandy island on Seminole Street,
now lapped in asphalt.
The oaks we used to climb are huge
and ferns I don’t remember
grow like green waves under them.

I feel the urge to hold mud in my hands
and hug trees, while my brother
toes from root to root and shouts,
Look out for lava!

We arrive at our old home so quickly
we have to pause to take it in.
It’s the same, but different –
a blue tint under the windows like eye shadow.
It must have matured while we were away.

I’m still drawn to the red mosaic of porch floor,
how it cooled my legs in the Florida heat.
We see the gentle slope of the roof,
the stucco medallions and Spanish tiles.

Bill misses our beloved palmettos,
despises the symmetry
of imported trees that anchor
the yard at intervals like paper dolls.

I sit down to memorize the house
while my brother cups hands
and peers in windows.
The curb is surprisingly shallow
and I grip the pocked cement.