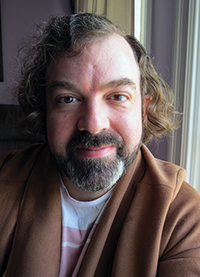 CJ Southworth was born and raised in Northern New York on the Canadian border. He grew up on a small family dairy farm, and first set his goals on becoming a professional writer when he was in elementary school. His poems have appeared in Assaracus, The Paterson Literary Review, The Main Street Rag and many other journals. He has also had fiction featured in Glitterwolf and Jonathan. He was the 2015 winner of the Allen Ginsberg Award, and in 2018 he received a SUNY Chancellor’s Award for Excellence in Scholarship and Creative Endeavors.

CJ Southworth has chosen the perfect title for this collection of poems that’s part-documentary and part-love letter to the woman behind the caricature of her own rise and fall. Yours, Marilyn examines how the ‘First Lady of All America’ gave herself away to find herself; the ‘Yours’ referencing everyone who claimed ownership of Norma Jeane Mortenson—her lovers, her audience, her persona, and her true self underneath it all. I couldn’t put this book down. ~Bryan Borland

In Yours, Marilyn, CJ Southworth does the impossible—he brings Marilyn Monroe back to life. He inhabits her skin so we are made to feel what she feels, to see the world through her eyes. Amazing book! I guarantee you will come back to these poems again and again. ~Maria Mazziotti Gillan

The Birth of Marilyn Monroe

In the first flash,
I feel this new body.

Maybe the photographer doesn’t notice,
thinks this is still the same girl on the home front
that he pulled from the assembly line
to show the troops their ladies still believe in them,
but the first flash of the camera
is the nova that births my world
inside the form of Norma Jeane.

My reflection in the glass of the lens,
the sudden sure cock of my hips,
the way my shoulders push back,
open my chest to the eye of the camera—
I know the uses of this body
in the way the old girl never did,

and I turn it now
to the eye of my father,
birthed fresh and new in the glow of flash bulbs,
my DNA completed
by emulsion and silver halide,
daughter of every motion picture dream
that ever played across the screen
at Saturday matinees,
daughter of the camera
capturing me now
in the moment of my birth.

M in the Pictures

And when the ink is dried, I’m theirs,
suddenly owned more completely
than I ever thought I could be.
But I don’t feel like star material
walking up a stairway,
bumping into the lead,
and delivering my single line,
which they razor out of the strip
and make disappear
even more easily than I did that dead girl,
the way her mother, in darkened rooms,
used to cut the thin in-between lines
until the voices in her head
weren’t the ones in the films anymore.

But first there are dance classes,
acting workshops,
voice lessons,
and what money they pay me
drains away each week
as I stretch my legs at the bar,
try to land the perfect form
in front of the wall of mirrors,
stretch my voice to hit the right key,
all so I can hold a cocktail in the background
and play Female Extra #3
while I try to decide whether to eat
or save money for bus fare
so I can be at the studio an hour early,
arm outstretched
like I’m grasping for something being offered
that is never put within my reach,
posture perfect in a leotard.

But they teach me how to move my mouth
like I’m making words
without any sound coming out
so they can get a clean recording
of the dialogue between the actors,
and my stockings have runs,
and my feet ache each night,
but I keep hoping I can perfect the right leap
that makes the magic
that adds just three more frames,
just two more,
enough so I can be seen.

And they take even this away from me—
say I will never be beautiful enough
to be in CinemaScopic light,
that keeping me is a continued investment in bad stock,
and no one’s going to make me a star,
because no matter how I learn to speak or move,
I can never learn to not look like me.

If it keeps the car,
I can do it,
so I can keep looking for work.

It’s not difficult to be naked—
babies can do it—
and plenty of fathers
see their daughters nude.
In the eye of the camera,
I am just another newborn,
lying against red silk,
a family photo for the baby book
to be adored by the loving parent.

If it’s what it takes to keep this life,
then I can do it,
and it’s only a few pictures.

What harm can come
from just a few pictures?