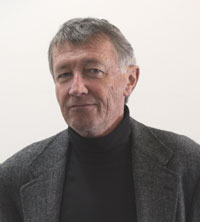 Chuck Sullivan is winner of the Best Book of the Year in South Carolina, Best Book of the Year in North Carolina, the 2004 Mary Frances Hobson Award for Arts & Letters, and the 2005 award in honor of Sam Regan, for Achievement in Fine Arts. His books of poetry include Vanishing Species, A Catechism of Hearts, A Dream of Lions, The Juggler on the Radio, Longing for Harmonies, and Alphabet of Grace. His original adaptations of Dracula, Frankenstein, Romeo and Juliet, and Macbeth, were produced by Moving Poets Theater of Dance at the historic Carolina Theatre in Charlotte, NC. Currently, Chuck teaches poetry residences in North and South Carolina and is head of English at North Carolina Governor’s School East, a position he has held for thirty years. He lives in Charlotte, NC and Edisto Island, SC.

Chuck Sullivan knows his own trade, to the point where he is not afraid to be wounded by his own tools….his is a skill that looks steadily, and reports plainly, the flakey, edgy, bizarre, violent…with irony and steady eyed humor.

Sullivan’s poetry is created out of an intolerable tension between violent eroticism and an equally violent religious thrust, which, in his best poems combine with each other like fire on fire and merge as one.

…in a nutshell, is the great observation—and wise counsel—and maybe even the central message of Chuck’s uniquely accomplished, enduring art: the gentle, friendly, even encouraging reminder of our collective vulnerability.

The flag is no stranger to differing opinions
about its proper handling.

Same Old Glory stripped from my casket
By the fingers of the gold bars
Mined from Honor’s Central Casting
And when he made a present of it
He mumbled something to my mother
That sounded like, “A grave

“With a basket like that there’s nothing
you can’t catch, Bub.”

Keith Dudney, 10, as he was running to catch his schoolbus, was hit yesterday morning by a pickup truck on Highway 9. Keith died later at Carolinas Medical Center.

“What child is this…” who, “…in a flash…”
at a trumpet crash…” is, “all at once
what Christ is…” struck down
by a pickup as he crossed the road too soon
taken and all the difference made trying
to catch his school bus on the outskirts
of Lancaster’s Red Christmas Rose City

“What child is this…” who flew
across the center line flew
“…Between the idea
And the reality
Between the motion
And the act…” flew
like the substance of a shadow
on the accidents of morning’s
broken wings falling between
Advent and The Nativity
and making no bones about it
as It Came Upon A Midnight Clear
we must wake and, “…feel the fell
of dark not day…”

And if you listen this Holy Night
you will witness their shut children’s choir
open with sweeter unheard melodies
in a rising carol’s slow rolling power
the music not small not small but far away
like The Star of Bethlehem lighting with Dylan’s
insight the long cold coming to the birth
of grief’s wisdom in the shaken hearts
of every child-lost father and mother
“After the first death there is no other.”