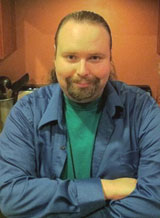 Jim Ryan‘s true origins are unknown, but he is rumored to have escaped from a secret government facility in his infancy and has been roaming the countryside frightening unsuspecting villagers ever since. He spent a good portion of his youth in Myrtle Beach, South Carolina and later obtained a degree in Dramatic Arts from Coastal Carolina University in an attempt to better insinuate himself into human society. The plan didn’t work, but instead led to a whirlwind of fun and exciting theatrical projects from which he is still recovering. He currently resides in Charlotte, North Carolina, where he attends the Carolina School of Broadcasting to further his plans for world domination. In his spare time, he writes odd bits of fiction and non-fiction, lends his voice to a number of podcasts and plays various role-playing games. He continues to act silly in public whenever appropriate.

Jim Ryan’s work reminds us that poetry can be fun and that it should entertain. In an era where poetry exists almost exclusively on the page, these vignettes skillfully preserve the vibrancy of stage performance while maintaining their integrity as printed word. In this world of condom-wearing fish, apocalyptic prophets, paranoid horoscopes, and Cro-Magnon mechanics, readers are sure to relish this book’s rollercoaster ride between deep belly laughter and even deeper insight.

Welcome, friends, to the Holy Caffeinate. I am Archbishop Oral, and I can be your guide to the everlasting Kingdom of Java if you believe in the healing power of caffeine. Friends, the path to inner enlightenment through the grinding and consumption of the glorious coffee bean is often marred with pitfalls of indecision. Many pretenders come up to us every day with promises of a better life through their mochas and espressos. But, the truth of the matter is that it makes no difference how you take it. All that matters is that you allow the righteous rush of the substance to enter your veins, and you will feel the power of it come upon you and carry you into a land of heightened awareness of unparalleled proportions: the ultimate adrenal ecstasy! But sometimes it’s not so easy, friends. Sometimes Satan, in all of his twisted trickery, will make it more difficult for you to have your caffeine in the morning. He may sneak into your kitchen at night, and put your coffee somewhere you can’t find it, or take the last of it for himself, leaving you to cast false blame on your loving spouse when morning comes. Or sometimes, he will titillate you with whispered lies about his own dark invention, the dreaded “Decaf!” You see, friends, Satan knows that if you begin to partake of the one true caffeine, you will be more awake, aware, alert and able to find him out more easily. So he broadcasts his lying television commercials with people getting up in the morning, drinking his accursed Decaf and somehow, by some unnatural and unholy ritual, being woken up by it and given the energy to face the day. But don’t be fooled by it, friends! Those actors are filled with Satan’s dark, drug-enhanced energy! He wants to turn this world into a shrunken, decaffeinated, bleary-eyed land of groaning misfits thumping around in the dark and never getting out of bed until 2 PM! But you can change all that. Satan is like that old, hardened, blackened coffee bean that just won’t come out right. But you’ve got to grab him by his tough shell and grind him up in the Cuisinart of Redemption, pour the Scalding Water of Salvation all over him and strain him through the Filter of Righteousness! Friends, for a small contribution, we will send you our thanks and prayers and help you to pick up that old and cracked coffee pot of truth and pour yourself a cup of enlightenment! The number is on your screen. Now, let us pause for a moment of prayer, reflection, and an important message from Sanka.

Hey, everybody! You never know when you’ll be visited by extra-terrestrials, but that’s no excuse to be unprepared when it happens. So here are a few tips to make sure your abduction goes as smoothly as possible. Now, the first thing to consider when the aliens come is that they’ll have to land somewhere. That’ll usually be your back yard. So, make sure you clear plenty of space for them. Get that birdbath out of the way and clear away any excess lawn furniture you have back there, because even though they’ll be sending one of their smaller scout ships you never know when they’ll want to bring the probe along with them. Most people have the misconception that the aliens will come into their house through the window or the back door, but in fact what they prefer is to simply pass through the walls. This means that you’ll have to make sure your wallpaper is wrinkle-free – remember, you can always use an iron to smooth it out. There is nothing more embarrassing than meeting someone from another planet for the first time and having to find out from them that your wallpaper isn’t on right. Now, once the aliens are in your house, they’ll pretty much head right to your bedroom. But before they levitate you up out of your bed, you should welcome them to your home, just like you would any other visitor. You may not be familiar with the etiquette for this kind of situation, but don’t let that discourage you. It’s perfectly acceptable to offer them some refreshments and engage them in light conversation. Remember that even though you’re being abducted you still have your duty to be a good host or hostess. The aliens will really appreciate it. Once you’re on board their ship, they’ll want to probe you anally. Don’t get upset about this. Remember that you’re dealing with an alien society that doesn’t have the same viewpoints or inhibitions that we do. They’re looking with the same clinical detachment that most doctors would. Besides, it can be quite a pleasurable experience once they get into it. Once they’ve finished probing and they’ve taken any cell samples they may need, the aliens will put you right back in bed where they found you. At this point, do not start bogging them down with questions. They’ve got a lot of other people to get to and, quite frankly, while the aliens are great at small talk, they’re not very good with the bigger issues. So, just let them go on to the next house. If you follow these easy steps, you can be sure that your alien abduction will be quick and painless and your homemaking skills will become the talk of the galaxy!

Ah, good afternoon, sir. Welcome to Chernobyl Resort, the first hotel to be built on a former nuclear testing ground. We hope you will have a pleasant (albeit a brief) stay. Let me take your suitcase. This way, sir. You are in Bungalow Number 25. As we pass by the garden, you will notice that our plants are much larger than those found in the United States. What’s that? No sir, that is not a rubber tree. It is a petunia. Not too close, sir. It hasn’t been sprayed for insects just yet. This is because those insects we don’t exterminate are recruited as bellhops and we want to see how our newest batch turns out before we spray the rest. We had been getting some complaints that they were chewing on the luggage, but we have that relatively under control now. As we head past the jungle overlook and onto the shore, here, you may notice a not unpleasant, heady feeling in the air. This is a perfectly natural sensation for all of our guests. If you begin to feel a bit dizzy, just tell one of our staff doctors. They’re everywhere, as you can see. No, not that one, sir. That is one of the rare members of the fauna indigenous only to this island, the elusive five-tailed monkey. No, wait… six-tailed monkey. I am sorry, sir – it is hard to tell at this distance and I am still getting used to this third eye. At any rate, on this stretch of the beach, we have volleyball games in the mornings and bocce tournaments in the late afternoon with non-stop fun and excitement in between. No, I’m afraid we cannot let you go in the water. The sharks have asked that we not allow any swimming. They are usually very friendly, but they can’t be held responsible for any accidents that might occur during their feeding time. Since the local fish developed language skills, the government has been kind enough to grant them amnesty, so if anything unfortunate were to happen the resort would still be held liable. Well, here we are, sir. Bungalow Twenty-F… sir?

Already? Ohar! Get the wagon! We’ve got another one. Next time we get someone his age, we’d better give him a closer bungalow!

Be the first to review “Abduction Etiquette” Click here to cancel reply.