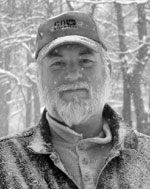 M. Scott Douglass
M. Scott Douglass is the publisher and managing editor of Main Street Rag Publishing Company where he coordinates all projects as both graphic designer and editor. Before shifting gears, he spent twenty years as a dental technician and previous work experience includes building construction and renovation, owning a collectibles store, breeding rats for the University of Pittsburgh and wrestling a lion.

He grew up in Pittsburgh and attended Penn State-Behrend in Erie, PA. During the thirteen years he parked in Erie, he coached both youth baseball and basketball. He has a degree in Graphic Arts from Central Piedmont Community College in Charlotte, NC—where he also taught for two years—and currently resides in Mint Hill, NC with his wife, Jill.

A MEMORY OF GARDEN CITY

I was too young in 1965
to appreciate the irony
of the episode: Alan Epstein
from up the street, whose family
moved from Wilkinsburg
to get away from the blacks,
Alan, who owned and guarded
every toy advertised on TV,
chose to showoff
the neighborhood’s first
10-speed bicycle
the same day the borough
scheduled to tar and gravel
the road. How he
appeared out of nowhere,
speeding downhill
through arm-waving road workers,
passed the gravel truck and
onto the hot black goo
that bogged his skinny tires
and sent him tumbling
in the stuff he would peel
from his skin for weeks,
how his mother dragged him
up the street by his one
clean ear and we never
saw that bicycle again.

Bought my first motorcycle after downing
a fifth of Jack at a wedding reception—
bought it in more ways than one.
Borrowed my brother’s Yamaha
from my parents’ garage and
wiped out the neighbor’s hedges
halfway up the driveway.

Lessons learned: left hand works
the clutch, right hand works
the break, push the choke in
before operating, hedges hurt—
even at low speed, and alcohol,
well, that’s a matter of continuing ed.

We sold my mother on a story
of drunken stupor meets moving stairway
to cover my facial bruises—she would never
have let my brother sell me the bike
if she knew the truth. Twenty years,
several bikes and scars later, the road
seems harder, the bones more brittle,
fewer long rides, fewer risks.

It took awhile, but Mom now knows
that I’m not perfect. And she forgives me.
Dad knew all along and never squealed.
I’ve discovered life as a balancing act:
if you only run on flat smooth roads,
you never learn the art of leaning
into turns, the sport of dodging
road debris. Then one day
a really big pot hole comes along,
you don’t know how to react,
and it swallows you whole.

If the answer is wrong,
the door of their lives
slams shut like
a deacon’s holy book.

Immigrants do most
of the manual labor—
they’re tough, reliable,
needy. They don’t know

Sundays are reserved for
traditional family values:
Johnsons and Pettys,
Earnhardts and Allisons—

disciples of the oval track,
line them up, drop the flag.
There’s beer and wings and a pastor
in pit row praying for the crew.

They’re a little loose
in the turns in the Bible Belt.
Even soccer moms drive mini-
vans like NASCAR veterans

and every Baptist knows:
Scripture has no speed limit.
And why should it—when we’ve
got God as our co-pilot?

There are no Nebraska cowboys
here, only weekend bikers in black
leather chaps and bright bandanas,
parked outside the diner on Maple Street,
gathered for a Sunday buffet
of fried chicken, ox roast, mashed
potatoes and green beans.

Around the corner, 30,000 head
of black angus stand shoulder
to shoulder in their own waste
as troughs are filled with fresh feed
to marble them for market.

After lunch, the bikers rumble
past the packed pens, wrinkle
their noses at the smell, and hope
it will be gone before next month’s
poker run through The Badlands.

Be the first to review “Balancing On Two Wheels” Click here to cancel reply.