Bathe in it or Sleep

WINNER OF THE 2008 MSR CHAPBOOK CONTEST 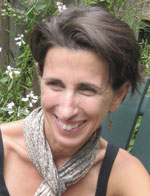 In this beautiful and accomplished first collection, Kim Triedman writes movingly of being a child, a mother, a lover, a daughter, but most of all of being a person with a body in a world of intense experiences, experienced in the body and in the intensity of language itself. These are stunning and often breathtaking poems. I can’t wait to read more!

Nature is a shaping presence in Kim Triedman’s poems of self and family—poems with the tensile strength and delicacy of a spider web. The season at the heart of them is winter: chill-choked;/ knife-blue sky sharpening/ its edge against/ the iron of the earth. Even indoors, the air is bright, etched, elemental. These revelatory poems discover beauty in the roughest terrain of love, of loss, of change—guided by the speaker’s quiet, yet insistent voice of the color of/ flame.

but winter:
howling,
chill-choked;
knife-blue sky sharpening
its edge against
the iron of the earth.
Every day an accusation,
even the trees:
branches like bones
pointing,
pewter shards of ice.
It’s a lot of

less than air. Even
the cypresses
gasping,
drained of color; more
black than green.

Think of it this way:

Between the past and the future
stands a house. It’s tidy
and white, nearly ready

to explode. The terror, you see, the
weight of such a thing:
neither here nor there, like words,

withheld, or the hand
that meant to stroke.
Even in a strong wind leaves

can double-back, and
seagulls hang, frozen in sky.
We sit,

your mind a bluish thing, twilit.
I have felt it, many times:
the squint of eyes, abstraction of hands,
the light of late afternoon

laddering its way through
broken clouds; even the cormorants,
blacker than oil, hanging their wings
out to dry. The way you

follow a thought like a tune,
half-listening-half-dreaming, in and out
of time, plumbing its bluish depths.
Never mind: I am not meant

to understand. The rocks are
black, the seaweed roils like
tangled dreadlocks in the foam;
the tonguing of the waves. Your face

Be the first to review “Bathe in it or Sleep” Click here to cancel reply.