This book was selected for publication after finishing as a finalist in the 2008 Main Street Rag Poetry Book Award.

Paul’s poem “Dream”, which appears in this collection, was recently selected for inclusion in The Pushcart Prize XXXIII. 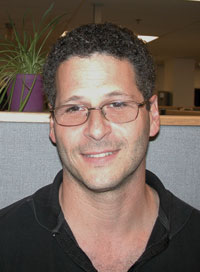 Paul Hostovsky’s poems have been featured on Poetry Daily, Verse Daily, and The Writer’s Almanac. He has won the Comstock Review’s Muriel Craft Bailey Award, the Riverstone Poetry Chapbook Competition, and the Grayson Books Poetry Chapbook Competition. His poems appear in The Carolina Quarterly, Shenandoah, New Delta Review, Atlanta Review, Poet Lore, Poetry East, Bellvue Literary Review, and other journals and anthologies. He works in Boston at the Massachusetts Commission for the Deaf and Hard of Hearing as an interpreter for the deaf and deaf-blind. He lives with his two children in Medfield, Massachusetts.

Paul Celan said that attentiveness is the common prayer of the human soul. Focus, the noticing of things not usually noticed, is a kind of prayer. Hostovsky’s poems strike me as kinds of (non-religious) prayers–of joy, of grief, of praise, of pain, of a blind man reading a braille book with it closed on his hand, but mostly prayers as a form of gratitude, a kind of thank you, thank you, Life! This truly is a wonderful book.

“This book kicks ass. Bear with me I/ want to tell you/ something about/ happiness, the first poem begins, and that urgency never lets up as Hostovsky tells us not only about happiness but also about sadness, pain, tenderness, making love, making sandwiches, making poems, making mistakes, and trying to make it/ right. How many poems have you read in which an extended basketball metaphor appears side by side with Rilke’s notion of beauty and terror; or in which a lesbian rabbi and recovering alcoholic priest hilariously discuss the relationship between profanity and prayer; or in which the phrase the shiny, poisonous leaves/ of Beauty refers not to the common, three-leaved rash-inducing plant but to the pages of People magazine? They’re all here, along with many other wonderful poems that are by turns funny and poignant–or both at once. Equally adept with fixed or not-so-fixed forms as with free-wheeling free verse, Hostovsky shows us, over and over, in language that is always alive, what it is like to be alive.”

In poem after poem, Hostovsky manages to make us feel the sorrow, beauty, pain, and very often the humor found in a life fully lived. Pick up this book and listen: you’re in for a lyrical treat.

When the ump produces
his little hand broom
and stops all play to stoop
and dust off home plate,
my daughter sitting beside me
looks up and gives me a smile that says
this is by far her favorite part of baseball.

And then when he skillfully
spits without getting any
on the catcher or the batter or himself,
she looks up again and smiles
even bigger.

But when someone hits a long foul ball
and everyone’s eyes are on it
as it sails out of play…
the ump has dipped his hand
into his bottomless black pocket
and conjured up a shiny new white one
like a brand new coin
from behind the catcher’s ear,
which he then gives to the catcher
who seems to contain his surprise
though behind his mask his eyes are surely
as wide with wonder as hers.

That boy was good with animals.
And he was good at animals the way
some hearing boys are good at
making sounds of artillery fire
using only the tongues in their heads.
Using only his face and his hands
he could paint any animal on the farm
on the air, and we’d recognize it
by some detail he’d capture, some
unmistakable physical thing, an angle
or posture, a sideways chewing,
the dangle of a tongue, the puppy’s ear hanging
inside-out like a pocket.

He was the only witness when the neighbor’s dog
got run over, and he told us the whole story
with his whole body, how the pickup
swerved to avoid her, grazing
her shoulder, the angle of impact
throwing her into the woods.
We all stood around, ignorant
of what happened exactly, hoping
and fearing as his story unfolded
and he embodied first the dog running, then
the truck braking, then
the dog then the truck then the dog
so we had the feeling we were seeing it all
just as it happened, and just as it was happening,
but in slow motion and with a zoom lens
and from six different camera angles.

Away Game at the School for the Deaf

Maybe we were thinking ears
instead of hands.
Stepping off the bus, we glimpsed
a flicker, then a flitting
from a sleeve. We felt
annoyed, then afraid,
like spotting an ant on the tablecloth, then
another and another till it hit us:
what we had on our hands was a nest,
a population:
everyone here signed
except for us, and our bus driver
was departing in our empty yellow school bus
leaving us standing there, wondering
where the gym was.

Once inside, we polished our lay-ups,
stole looks
at the deaf team polishing theirs:
we were taller,
but something in the air–tunneling, darting,
singing among them–
said they were quicker.
Their whoops when they scored, their groans
when the ball rolled round the rim full circle
and out,
were perfectly intelligible.
But the ref was at a loss:
he kept blowing his whistle but they kept on
dribbling to the hoop,
scoring points that didn’t count.

Be the first to review “Bending the Notes” Click here to cancel reply.