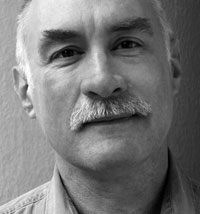 “Dream what has always been dreamed,/ and nothing changes,” begins one of the poems inBetween States. The people in these poems are looking for new dreams and new ways of dreaming. Many of the individuals begin at a place of uncertainty, but refuse to stay there. Over and over, these poems insist that we are not defined by our physical circumstances but by our reaction to those circumstances, what we do, what we say. These poems show how “the need to be heard does not change.” Al Maginnes does not offer easy answers; he understands that we are “puzzled by/ a past we were too quickly part of.” But he does offer the possibility for hope. He recognizes the “invisible music” that binds us, the possibility of “song that flies over/ empty plains of prayer and absence” to let us sing our purest human music.

Maybe the blindfold is not meant
as kindness for the condemned
like the choice of a final meal
or the last cigarette, a pleasure
meant to block awareness
of what’s coming. Instead it keeps
the living from seeing how
the eyes throttle with light
or glaze at the moment of impact
before the body empties into death.
In this age of performance, even an autopsy,
final audition of the body’s efficiency,
is theater. A TV doctor explains
how the flanges of the famous chest
are opened like curtains, the routines
of the reliable duo, systole and diastole,
the shuttle cocking of artery and vein,
the blood’s drifting clouds of toxins
all are measured and named,
no chance for curtain call
or final bow. In the film
I found on the internet and watched
because I started and could not stop,
the killers, not the condemned, wore masks.
He knelt before them as they read
their proclamations in a language
he was captive long enough to know
in fragments. His face a blank
of pure misery, glossed with sweat,
his hair twisted and on end,
some composure kept him still.
Perhaps he’d seen enough movies,
American enough to believe
in last-second rescues, the hero
who kicks in the door, guns blazing.
Maybe he believed this moment
a routine humiliation between
tea and afternoon prayers,
a ritual meant to be so frightening
that when water was thrown on him
or he was kicked, their laughter
let him breathe once more.
But the reading ended and one
of the masked men produced a long knife.
There was nothing swift nor spectacular
about what followed. Bodies wrestled
across the floor. Deep inside the scrum
started noise too high-pitched to be a scream,
noise I’d never heard a human make.
When the head was displayed,
it was no longer human, but something
molded from plastic and left too long
in the back seat of a car on a hot day.
If you watch this once, you will not
watch it again. In this world,
beauty and terror coax the same tears,
the voice of fear has no words,
the victim’s face, a trophy.
But morning still happens.
I get up, make coffee, walk the dog, things
I can do with my eyes closed.
Not until I read the paper or listen
to the news does the world take shape.
Some refuse the blindfold,
but most are grateful for a darkness
granted by a cloth so ordinary
it might have dried last night’s dishes,
then wiped the empty table free
of crumbs and ashes.

Names That Form One Absence

Every few nights a drunk wants music
bad enough to curse or punch the jukebox,
stone-silent for years although its lights
still cast a thin carnival sequence
over tables where drunks have carved names
until one set of letters covers another,
all of them spelling absences endless
as thirst beer and whiskey will not quench.

This afternoon, one man sat alone
at a table, drinking water, shuffling
arrowheads he walked just-turned fields
to find, something he does each spring,
plucking stone tongues sharpened centuries ago
to say the one cold word of the past. Perhaps
he believed he could somehow arrange them
so the past would unlock, let music rise

out of stone, out of the silent jukebox.
Each year the fields are harder to walk,
the arrowheads fewer. And no stone will
carve the name of his particular absence
into wood. He left to put the arrowheads
on his wife’s grave, mute testimony
to the failures of flesh, of water and stone.
When he returns, they will be gone.

He used to enter the church and kneel
to say her name, but today silence
and deep thirst send him back to the bar
where he drinks whiskey without water
until the tired stone of his tongue
rises into song that flies over
empty plains of prayer and absence
to meet the jukebox’s stained lights.

When the plane’s cabin filled
with the sound of crying, I blamed
the children a few rows forward.
Below us, the landscape
of one anonymous state unfolded
into another. Would it surprise you
to learn the one crying was a woman?
The volume of her grief would not
yield to the whispered comforting
of the attendants. Beside me,
a man, suit rumpled from
too many flights, grunted in sleep
he held as grimly as a child might
hold the ragged blanket that has been
her most reliable companion.
My daughter cried for the three-
and-a-half hours of her first flight,
her ear, already infected, burning
with altitude, the song I sang
to soothe her as unwelcome
as the plane’s pressurized air.
Maybe the woman wept for illness,
her own or someone else’s,
or some betrayal of love because
we are mostly easily broken
by what is near, our body
or the body we bring close.
The body of the daughter
I bathe and pray over
will become foreign to me,
a journey as inevitable
as the failure of my body
or the words I whispered
to quiet her or the tears
of a stranger as we were all
borne from one state to another.

Be the first to review “Between States” Click here to cancel reply.