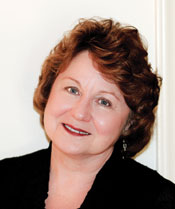 Gail Peck is a graduate of the MFA Program for Writers at Warren Wilson College. Her chapbook, New River, won the North Carolina Harperprints Award, and her first full-length, Drop Zone, won the Texas Review Contest. Foreshadow was a finalist in Main Street Rag’s chapbook contest, and they also published Thirst. Poems and essays have appeared in The Southern Review, Greensboro Review, Nimrod, Louisville Review, Cimarron Review, Mississippi Review, Rattle, Southern Poetry Review, Kestrel, Brevity, Cave Wall, and elsewhere. Peck has been both a finalist and a semi-finalist for Nimrod’s Pablo Neruda Poetry Prize, and her work has been widely anthologized. She has been awarded grants from the Vermont Studio Center and the Virginia Center for the Arts, and her work has been nominated for a Pushcart Prize.

Gail Peck’s new collection couldn’t come at a more propitious time. Her poems, based on WWII and the Holocaust, are trenchant reminders of atrocities still taking place in a world where genocide is a continuing nightmare. Filtered through the lens of other art, Peck’s unerring eye zeroes in on details that propel victims into the reader’s deepest consciousness. She reminds us, using the narrative self as an example, of the complicity that makes indifference to suffering possible: the likelihood, the narrator says, that she might once have ignored a beggarwoman, forgetting her own mother’s “shoes held together with safety pins,” while her grandmother begged for food for her child. Perhaps most moving of all are the poems based on the artwork of children in the Terezin Concentration Camp. Peck’s restraint in these poems, showing the children’s images subtly suggesting their situation, in many cases without full awareness of their plight, makes the poems all the more chilling. These poems eschew any possibility of sentimentality, presenting their subjects with exquisitely chosen language and spiritual bravery.

“The war goes on-who can rest?” asks Gail Peck in her unnerving, searing collection of poems, Counting the Lost. With human indignity and the banality of evil casting a cold eye, these poems about the Holocaust look through our simple lives, and remind us of our need for ethical vigilance, and for consolation.

Rubble from bombs still in the city
as we rode to Brandenburg Gate
where my parents, my sister and I
stood looking up at those majestic horses.
If someone had offered to take a snapshot
we would have moved closer, my stepfather,
1st Sgt. James B. Pruitt, mother holding
my baby sister, Joni, and Sherry next to me,
smiling a lie of happy togetherness in that
place divided between West and East.

Mother, who grew up poor and longed
for pretty things, sent the maid
to the East Sector to buy crystal
goblets with money she’d saved, and the maid
brought them, one by one-deep burgundy
and cobalt blue-to our side of Berlin,
now a thing of beauty on a shelf. No one
drank wine, so their heft was never felt.

They came back with us to the states,
and we packed them for every move.
Six of them given to me as a gift when I married.
I don’t use them as I prefer to see the clarity
of wine, and worry about the lead.
But, I’ll keep them. I should tell my children
about these goblets etched in history.
My mother, sitting at the table in front
of the lighted china cabinet, playing cards,
laughing and smoking with her friends, Kitty and Helga.

after a photograph from
The Holocaust Chronicle

She bears the weight of grandmothers,
stooped in a checkered jacket and kerchief,
clutching a bundle, the smallest
grandchild beside her, possibly three,
head uncovered, holds her sister’s right hand.
In the left, the sister has a small white bag.
The tallest girl follows,
hands in pockets, legs bare–
one foot firm on the ground,
the other with only heel touching.
The oldest girls have identical coats,
belted in back, decorated with a button.
They are walking along a railroad track
at Auschwitz, beside an electrical fence
that keeps even the birds away.
No face is visible, nor can we see
those who walk in front or behind.
I hear young voices–How much farther?
Where are we going? Will Mother be there?
Their mother must have bought the coats,
new shoes that sent the girls running
to their papa, all shouting at once, See?

Cherub candlestick, one leg crossing
the other, white porcelain with
pink and yellow roses–petals
that could chip in all these moves.
My mother bought you when
we lived in Germany, ten years
after the war. Made in Dresden,
a city where Augustus the Strong had ruled,
and believed in alchemy (it was the Age of Reason).
He needed gold due to all he’d spent on wars,
brought Johann Friedrich Böttger to sit above
Meissen and boil and burn and batter
combinations of lead and mercury to no avail.
Instead, his eureka was porcelain,
setting the factories in motion.

When Dresden was bombed, the factories
would come tumbling down. Hard to believe
anyone survived when looking at that famous photograph,
the life-size sculpture Güte–The Goodness–
angelic figure in profile, still intact,
shoulders bent slightly forward, folds
of a robe draped to the tip of one hand,
the palm upward–We had no way to surrender.

Who could live civilized again, listening to Wagner,
setting the table with gold-rimmed china, serving demitasse
cups after dinner, pouring from a floral chocolate pot?
You escaped, little fat-butt cupid with dreamy eyes,
your mouth locked forever over a flute.

Be the first to review “Counting the Lost” Click here to cancel reply.