Steve Taylor was the Winner of the 2004 MSR Short Fiction Contest for his story “Phantom Limb” which will also appear in the 2005 MSR Short Fiction Anthology, but he actually had 3 stories finish in the top 5 , so we invited him to submit a full-length manuscript for book consideration. Cut Men is that book. 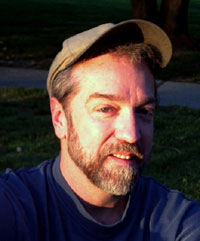 His wife, Fran, and sons, Matthew and Logan, let him live with them in La Crescenta, California, where the neighbors hardly ever complain about the large series of home improvement projects he has almost finished over the years.

He went to a lot of schools, such as UCLA, Columbia, and Claremont, and some even gave him impressive-sounding degrees, but his favorite was Vermont College because of all the trees and good writers who knew how to crack jokes and drink black n’ tans.

The stuff he writes has gotten him an L.A. Arts Council Literature Award, made him a finalist in the Katherine Anne Porter Prize and runner-up in the New Millennium Writings Awards, and, most recently, won him the MSR Short Fiction Contest. Humoring him in this way has only increased his urge to write even more stuff.

These stories are friendly, smart, and full of hard-earned wisdom. Steve Taylor is the real deal.

Steve Taylor’s delightful debut collection of short stories is direct, honest, and engaging. His male protagonists could be your office buddy, the guy down the street, or, perhaps, you. A father connects with his son—and the dimensions of that connection are dazzling, as we learn at the end. Another man, trying to help out a small girl, finds himself on the shore of an unsuspected, harrowing future. These sweet-tempered stories manage the marvelous trick of being likeable without ever flinching at hard truths, strange outcomes. You’ll be glad you read them.

Kelly Cherry
Author of We Can Still Be Friends

A vigorous and highly original voice—I should say voices, since Mr. Taylor is so versatile—resounds in these stories. They contain humor, poignance, intelligence and, most importantly, the aortal beat of life.

Stefan Kanfer
Author of Groucho: The Life and Times of Julius Henry Marx
and Ball of Fire: The Tumultuous Life and Comic Art of Lucille Ball

Steve Taylor blends the daily blessings of life with the sorrows of life in ways that are immediately believable and unexpectedly uplifting. His prose reveals the tender details and interconnectedness of his characters’ lives with utmost affection and integrity. You’ll love reading these stories.

My cell phone plays “Rock-a-bye Baby,” so Darryl and Ed snicker and grind their fists into my shoulders. “Damn that Viagra,” Darryl says. “Yeah,” Ed says, “Too bad Rogaine don’t work that good.” It’s been their running joke for months because I’m pushing fifty and Mary’s only thirty-two. Just for the record, I didn’t need Viagra, although I did consider the Rogaine for a while. Then Mary caught me touching my bald spot, leaning down to look at it in the mirror. She took my fingers away and ran her tongue over the tips, pulled my head down and brushed the bald spot with her lips, then worked her way down to my ears and so on. Now every time I reach up and touch the spot, that’s what comes to mind.

Mary says I should be thinking about what’s important. She means I work too much, and, of course, she’s right. I had to put on a third crew because we couldn’t keep up with it all—happens every time the interest rates go down, everybody calling up like mad, like something terrible will happen if they don’t get a rumpus room in the next two months. Mary says it’s a miracle we ever got together, and I’m sure as hell not saying I disagree.

We were doing some finish work on a guy’s beach house—one of these real rich cheap assholes—and we’d spent a lot more days than we needed to putting in his wet bar and a parquet dance floor because he kept making all these fricking little changes, and he’s got his girlfriend there, and she’s bitching at him because the floor comes out a shade darker than she thought it would. Guy’s got a ten thousand square foot house with a hundred eighty degree cliff view of the sea, and he wants me to strip off the finish and redo it for free. And of course he’s one of these bastards that starts to play hardball the minute any damned thing goes wrong—it’s his goddam mistake, or his bitch girlfriend’s and he’s raving about suing me for it. Usually I probably would’ve just done it because it wasn’t worth the trouble fighting about it, but I can’t get myself to give in to this little creep that easy. So I keep my cool and tell him to go do what he thinks he needs to do and let him go off and call his lawyer or pretend to or whatever the hell him and the bitch girlfriend figure will cost him the least.

Then I see this pretty girl grinning at me from the doorway. She doesn’t even look like she belongs there. The first thing you thought of when you looked at the butthead’s girlfriend was how hard she was straining to come off as natural, like being comfortable was some sort of look you see in a magazine. The girl in the doorway looked wind-blown and a little sunburned like she actually set foot on the beach now and then instead of treating the ocean like it was expensive wallpaper. But I don’t say anything to her because I figure she’s got to be some kind of friend of theirs and maybe she’s just come to take a gander at the dumb schmuck whose ass is about to become grass in court. But she looks around behind her and then tiptoes over to me and whispers, “Don’t worry. He’s actually a chicken shit. Just keep doing what you’re doing, and he’ll give up.”

I grinned back and whispered, “It’s his girlfriend that scares me. I’m afraid she might decide to let go of his and grab mine.”

Mary snorted and had to cover her mouth. “Don’t worry, “ she whispered, “Cassie doesn’t have as a good a grip on those as it looks. She thinks this jerkoff’s gonna marry her, so she doesn’t go too far. Bet you she keeps her mouth shut.”

Then we heard them coming so Mary walked away and squatted down like she was checking out the finish on the dance floor. I stuck to my guns, and she was dead right on both counts—the little bastard paid up, and Cassie, who turned out to be Mary’s sister, didn’t say squat. He raved enough beforehand though, and all during it Mary shot me these little smirks, and when they went out of the room again, she gave me a big grin and a thumbs up. If I’d thought about it before I did it, I wouldn’t have asked her out to dinner because what the hell would make me think a woman like that would go for a middle-aged jackass like me? Still don’t know.

So when the cell goes off that morning, I think it might be Mary calling me on purpose so I’ll be sure to hear the tune.

But it isn’t. It’s Nyquist, the vice-principal at Brad’s school.

“Brad forgot to keep his hands to himself,” Nyquist says, “so I’m afraid I’m going to have to suspend him for a day.”

I turn my head away from the receiver and cuss under my breath. “Mr. Deleon?” Nyquist says, “Are we still connected?”

“Hey, look, you really think this is the right way to handle it? I mean, Jeeze, it’s only the first week of school. You’re supposed to be trying to educate this kid. How do you plan to do that if you keep sendin’ him home?”

It’s a logical argument, but it never works. I just say it like a reflex to get on his nerves. I should brown nose him, you know, so he’ll want to bend the rules for me. As it is, he always answers exactly the same way, and I can’t get him to say anything that shows he’s listening.

“I afraid we have a no-tolerance policy about fighting at school. The purpose of suspensions is to involve the parents in the process of teaching the students appropriate behavior.”

I don’t bother to argue that Brad’s a special case because he’d only say there are no special cases, and he’s right, he’s right. If Brad’s ever going to have, well, going to have a chance, he’s got to stop, you know, reacting so much. Wish I could remember that myself when I’m on the phone with Nyquist. Instead, I’m irritating him, and I know it.

“You called the house?” I ask. It’s not that I want to pawn him off on Mary, but she’s damned good with him—patient, you know—in fact, it’s probably the wrong word—it’s like she doesn’t need to be patient. He just responds to her. So it’s better if she picks him up.

“Yes, of course I called,” Nyquist says, “but I just got the answering machine,”

“Oh, you did?” I say and remember Mary’s appointment with the obstetrician.

“So you’ll come to pick him up?” Nyquist says, his voice getting pushier.

I know what he thinks of me, but it’s not true—I’m not like that at all. I love Brad. I do. It’s not his fault. I just can’t stand to have Nyquist calling me.

“Right away?” he asks, like I might wait a few hours. Tell you what, I want to say, how about tomorrow or maybe the next day? Just let him sleep in your office. See, we don’t let him come home when he’s bad. We have a zero tolerance rule about it. But I don’t. It’s not his fault.

(Order a copy of Cut Men by Steve Taylor to read the rest of the story.)

Be the first to review “Cut Men” Click here to cancel reply.