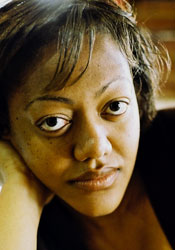 Melanie Henderson was born, raised and lives in Washington, DC. She is an alumnus of Howard (’04) and Trinity (’07) Universities. Prior to earning an MFA in Creative Writing from Lesley University in Cambridge, MA, she studied poetry at the Voices Summer Writing Workshops (VONA) in San Francisco, CA. Her paintings, photography and poems have appeared in Drumvoices Revue, Fingernails across the Chalkboard: Poetry and Prose on HIV/AIDS from the Black Diaspora, jubilat, and Southern Women’s Review among others. She was selected as a featured reader for the 2009 Joaquin Miller Cabin Poetry Series and as a recipient of the Larry Neal Writers’ Award (DC Commission on the Arts and Humanities). She is the Managing Editor of Tidal Basin Review and the mother of a charming little boy.

Delicious in their sheer sonic energy, the poems in Elegies for New York Avenue take us on a headlong, heady rush through story and memory, portrait and lyric, lament and celebration, every line sounding the way for another, linking again and again to a surprising intimacy and reality. The mosaic of neighborhood and family that Henderson creates is spellbinding. Each piece, each person, each emotion is emblazoned in these poems by precise words and honored by an attention both tender and fierce. These poems throw off sparks. Catch them!

Melanie Henderson’s verse in Elegies for New York Avenue is the blessed sound of the street and stoops of Washington D.C., the lives of the special people on the porches and parlors, the unseen, but the people who are the world, and are the city that is loved so well here. Her first collection of word is more than a triumph; it is one long magical song that showcases a poet with a big heart and an even bigger literary vision that heals and holds up together.

In her debut collection, Elegies for New York Avenue, Melanie Henderson carves out a totem of love and loss from the mercurial landscape of memory. Her elegies are lamentations for the living—childhood friends that no longer haunt the avenue, a brother mixing beats with Go-Go and hip hop heat, altars for aunties and cousins, portraits of a father slipped into the shadow of a gun and the promise of a son—that tease and trace history, worrying the present’s past in lyrical, lilting, pristine poetry. Henderson does for DC what Bearden did for Harlem. In her verse, she collages in a lost world of Black pride, struggle and integrity into a precarious present palpable as hope.

To begin at the beginning
& we are not from this place
We know the snow
doesn’t fall in January,
the gum of July doesn’t stick to the blood in our skin

& we are not from this place
We know the rows of dependent houses
liberated by separating hues of a president,
my alarm clock’s muteness, temporary
it’s arteries, a blazing blue; it’s 7:59

We know the vacant eyes of our streets,
pots in the pavement sing
from this place we are from–

47 years after the March on Washington

Chests pulse in the presence of children
reared in fearful slogans, clad in Arizona shirts,
founding fathers digitized in Shepherd Fairey
hope, revisited as fear to cause a great divide.
There are many American families, hardly
any smiles, even less courtesy, the monument’s
cement base shows cracks about the seams,
a circle disfigured like a beaten black body.

Thunder comes in from the left, Independence Avenue
thumps under black soles, we merge at the corner,
hold hands under a flag, earth, skin, blood,
There are American families, hardly
any frowns, even less fear, a corridor of hope
in line, in solidarity, reclaiming the dream.

find the durable, old leather belt,
been kin to your backside since
your breasts were little girl still,
its dirt-deep color made deeper
with your blood, your female bid;

stroke the dull edge of silver
along the cow’s hairless hide,
its skin will be near white
when the sharp is ready
for cutting away a burden–
the white will return to health
with a rub of flaxseed oil–
this is called survival;

process toward mister
with the promise of his crown,
afterlife strong, and prayed over,
surely, the hand of your sister
will arrive to let loose the grip
of the silver tool, show you
the worth of ceremony.

Emmett, Jr. is baby bright-eyed
watching the cameraman
like a target from the shores
of his Navy ship.

Dressed like Black Rockwell’s,
not one of them smiles under
the shadowy brim of the father,
the husband, a sharp fine suit.

Be the first to review “Elegies for New York Avenue” Click here to cancel reply.