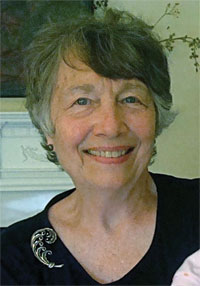 Dede Wilson is the author of three books of poems: Glass, Sea of Small Fears, and One Nightstand, a collection of light verse in forms followed by a primer to poetic form. Four poems from Eliza: The New Orleans Years were published in Nimrod as finalists for the Pablo Neruda Prize, and the poem “Yellow Fever,” published as “Hydra,” was nominated for a Pushcart. Her poems have appeared in Carolina Quarterly, Spoon River Poetry Review, Poet Lore, New Orleans Poetry Review, Poem, Cream City Review, Tar River Poetry,Iodine Poetry Journal, Flyway, Southern Poetry Review, Cave Wall, South Carolina Poetry Review, Asheville Poetry Review, The Lyric, Light, and many other journals. She has published short stories, essays, and a family memoir, Fourth Child, Second Daughter. Dede is a former travel editor of the Dallas Times Herald. A native of Louisiana, she has lived in Charlotte, North Carolina, since 1967. She and her husband have two grown sons.

Eliza Moore was born in London on August 8, 1819, the same year as Queen Victoria. Her parents were Sir Michael Moore, an Anglican minister, and his wife Elizabeth. After her father’s untimely death, Eliza sailed with her mother and sisters, Maria and Louise, to New Orleans.

As the story begins, Eliza — who has married an English sea captain — is on board a packet ship nearing the port of New Orleans. It is late summer, 1837.

Papa Had Pulled Us Down, Preaching
Hellfire Out of the Flask of His Mind

He was the vicar, but he was a slurry
disgrace. He’d reel and stutter, even weep,
and when the deacon tripped over him, stone-cold
in the nave, we wept, we prayed, we buried him,
engaged passage-and sailed. I slept at sea,
as sound as Maria and little Louise.
Mum on deck, stuffing her grief with cakes and tea.
And the captain-what did he want from me?
My red hair. My fair skin. I was listless,
losing horizons. He held me steady,
lunged and teased. Like Papa he wore mutton chops.
I wed at sea while my sisters slept, tucked in.

The smells are thicker than any in England:
coffee, sausages, sugared pecans. Flesh
too ripe, too perfumed. My own captain
unwashed. And me in sun-stained threads!
On the levee, a leper is begging.
Someone flips him a picayune. Enough,
I pray, for a dip of soup. I stumble
on rocks and cobbles, pitch through the streets.
Beg for my sisters. I saw Louise, I did,
peering back at me from a carriage.
That small bleached face. I cried to her, I ran…
my captain grabbed my sleeve. The sky is ringing
with heat and mosquitoes. I’m weak-kneed…trying
to breathe…Ah! Scents of camphor and sassafras…
that sweet reek of whisky reeling from doors.
The Vieux Carre. I sway against a wall.
He leads me by the wrist to a filthy street,
through a door, down an oily hall.

In the French Market

I walk as fast as I can, threading the stalls.
Acorn squash, late potatoes weigh my basket,
anything to roast on the grate. Yams. Cushaw.

He’s here. I finger a sprig of sassafras.
That man…called Caleb. I am unreeling
beneath the surface, so deep I cannot breathe.

I grip my shawl. I’ll leave. Yes. A girl glides by
with macaroons and nougat, oranges, candied
pecans. He sidles beside, drops a silver

into the marchande‘s hand, bows to me with figues
celestes, sweet figs from heaven. Anyone can
see. I do not turn. I stand. I eat. I feast.

Morning of the Duel

I unlace my shift, bend to the basin, breasts
cold against the porcelain bowl. Loosening

my braids, I lift a brush to my crown, release
the musk of my hair, its flame, its weight

warming my shoulders. My hands are numb, my breath
makes ghosts in the room. Those clattering horses!

Those smelly canals! Now they are counting,
stepping away before they turn….

Be the first to review “Eliza / Dede Wilson” Click here to cancel reply.