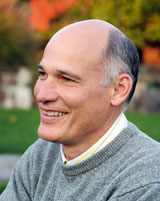 Mark Pearson lives in Pottstown, PA, where he teaches English and coaches wrestling at The Hill School. He has also worked as a college wrestling coach and journalist. He earned a Ph.D in English from the University of Georgia and an M.A. in English and creative writing from the University of California, Davis. His fiction and essays have appeared or are forthcoming in The Best American Sports Writing 2011, Altered States, Aethlon, Blueline, Broken Bridge Review, Carve, North Dakota Quarterly, Short Story, Sport Literate, Stories, andSuicidally Beautiful, a short fiction anthology by Main Street Rag Publishing Company.

What a fine debut! These are stories in the classic mold, plotty tales of men and their travails: hunters, fishermen, farmers, writers, athletes and their coaches. Anybody who is a man, or knows one, will appreciate and enjoy this solid collection.

–Pinckney Benedict,
Author of Miracle Boy and Other Stories and Dogs of God

This collection of fully developed stories explores a variety of struggles–from wrestling to natural disasters, crime, gun abuse, difficult love, and psychological disorders–with surprising twists leading to deep psychological insights and epiphanies. The stories pinned me down as though in a wrestling match, and only with the last ring was I able to get up (from my armchair) with a buzz in my ears.

–Josip Novakovich,
Author of April Fool’s Day and Salvation and Other Disasters

The thing I most treasure about this powerful collection is that Mark Pearson always tells the truth, a less than easy maneuver for a writer of fiction. But great fiction, genuine fiction, is a lie truthfully told. No matter where the stories are set — in the Iron Belt towns of Pennsylvania, or amid the sere winds of the Great West, or the blood-spattered confines of the boxing ring, or the wrestling mat, or the manicured quads of a private school, on water, in the bedroom, in the newsroom, Pearson shows an unerring ability to get to the emotional core of every character, and exposes the fine threads that stitch together human relationships. He knows the human heart; he knows something about you, and about me.

—Reginald McKnight,
Author of He Sleeps and White Boys
winner of the Drue Heinz Literature Prize

He, once renowned for murderous right, and devastating jab, a man despised for laughing at his arrest for striking his wife and joking about the way she flew like a rag doll across the room, could not resist the chance to step into the ring one more time despite eroded skills and the passage of time so incomprehensible to him now.

And so, they came to the deteriorated concrete civic arena in a town that never hosted a name as big as his. Laughing, joking, smoking cigars, they paid ten dollars a ticket, twenty-five for ringside, to see the man get what he deserved. All he wanted: the Tennessee state professional heavyweight championship, not the world title he once held. Pathetic, the city newspaper had said: How hard a man can fall. How far! What did they know? He scoffed, he knew he was there because he loved every minute of it, from the sharp sound of the tape ripping as his fists were wrapped to the echoes of the ring announcer booming his name out into the darkness around the ring.

The crowd laughed as he climbed into the ring. He was paunchy, looking like a man who had not trained for months, years perhaps, covered in a sweat they joked about testing for alcohol, and cocaine. He had jowls. They shook when he spit as he entered the ring, hanging a bloody gob on the skirt of the ring. The front row crowd winced, and cursed him for the spit that sprayed them. He stepped through the ropes and entered the ring – a moment he relished, taking the stage, and standing above the crowd. Yes, those in the front rows would look up at him, and he loved that. His heels at eye level, black shoes shushing the bright blue and white canvas.

Time entered the ring with him, for there stripped of satin robe – his nickname Assassin embroidered across the back – he stood naked, revealed, a pretender to his former self. Every moment there, now measured. Three-minute rounds, one minute break between rounds. The referee ready, waiting to deliver his count. The lights bright enough to reveal the pores in his skin to the fans in row one.

The opponent in the opposite corner looked like dozens of others. He recognized him as one of them – the two hundred he faced in amateur and pro fights: young, wise cracking, foolish enough to think he had a career ahead of him. This opponent chosen as a walking target, limited in skill, and powerful, but born with the endurance of a trotting wolf on the trail of moose. He knew this one like the rest also desired all that he once had, the world titles and all rights and privileges pertaining thereto. The money, the women. Mostly the women.

The introduction. Ironic. Two men about to beat each other’s brains out introduced to each other as if they were at a party about to converse. He laughed at the thought of it. How many times had he been through the routine and this had not occurred to him? He grinned. His opponent, perhaps thinking it was a mocking leer, shoved at his gloves when they raised them to touch, shouted incomprehensible threats through his mouthpiece. He saw the rabbit eyes, darting, and as the deep sweat pored from his limber body, he knew the kid was scared.

The fans waited for the bell too. He could see them, shifting, yelling. He had the urge to shout back at them like he’d done in the press and on the television: “I am who you all want to be and you hate me for it.”

When the bell rang to start the opening round, he defied them. Round after round, the skills buried beneath the flab and disuse carried him to a lead on all cards. Moving in flashes as he once had, feet gliding inches above the canvas, in and out of the grasp of his opponent, who stumbling, amateurish, appeared as a gawking kid in the presence of a great artist. A lumbering boy, outmatched except in heart and strength. But, then as the rounds went on they wrestled. They did not box. He slipped in punches, frustrated the boy.

He grinned at the crowd between rounds as he looked out on their disappointed faces. They booed him, shouted insults. He taunted them, shaking a fist in the air as he returned to his corner. Using the old man’s tactics, clinching, shoving, he conserved his energy. Oh, they hated him, his magnificent arrogance, and petulant demeanor. They hated him for crashing Rolls-Royces, Ferraris, wearing fur coats and fucking white women.

The punches came, artless attacks, but steady. They thudded off his forearms, slid off shoulders, and cut the thick air in front of his face. He blocked, slipped, clinched. One got through in the middle rounds, stung him. Lights flickered. The arena went silent. The crowd rose, sensed the moment at hand, but he held on, grabbed an arm for a crucial five seconds until his head cleared. The referee tried to pry them apart, issued a warning. When the bell rang to end the round he waved at the jeering crowd. A box of popcorn skidded across the ring in front of him. He kicked it into the front row.

Then it came, finally, and just as brutal as they hoped it would be. A slashing left to the body that brought his arms down enough to let in the right. And the right came in quickly, skimming the top of his red eight-ounce gloves, smacking his skin. The gloves hard, padding meant to protect fists, cracked the jawbone on impact, sent his head snapping back as if attached to a bungee cord not neck, bone, and muscle. Neck in arc, body falling backwards, slowly at first, as if a redwood crashing in the forest, first shaking free its roots, but gaining speed as it approached the top rope where it hit and then whiplashed.

The vein severed, leaking blood meant for the brain, flooding tissue not nourishing it, like a river that overran its banks. The referee drifted in a pool of light, waving his white-shirted arms as if swimming there. He was swimming too, backward and forward through time, trying to make sense of it. No longer angry but confused, a boy again, running across broken glass and shattered brick in the abandoned lots between ravaged tenements, on his way to the braided river where clear water mixed with mud. There, waiting for his turn to swing on the big rope, out over the merging waters and drop. How long had he waited there on that afternoon, any of them? The river unwound itself from the beginning of time, reached backward into the past and forward into the future. It moved beyond him then and now as if he was standing still, feet anchored in the muddy bank.

Was that his mother’s voice, calling him to dinner, warning him, chastising him? I told you not to enter that ring. That’s no place for a man with brains, unless he wants them beaten out of him, and him made into a mumbling slow-witted gardener, potting plants all day, lost in his dreams and nightmares, not sure of the time of day. But, she didn’t understand what it meant to be a man, to stand in the middle of the ring and have his hand raised. Where else was that going to happen? And so he won and won and won, and each time she smiled and shook her head, and asked when he would have enough. When he said never, she knew he was right and she cried, served him the steak and eggs he’d bought with earnings from the latest fight, and let him eat alone. She would not move into the house he bought her, or drive the silver Cadillac he parked in the drive. I know where that river flows, she said. I know it up and down from source to mouth.

His turn came and he was out over the river, releasing the rough rope that bit into his palms and fingers, the burning feeling of holding on too long. He was soaring, above it all for those few seconds, free, taunting those landlocked souls standing on the banks. With a half-turn, a wave, and a shout, “Sayonara, suckers,” he splashed into the river and sank down, the sunlight distorted above him, pouring down into the depths, kaleidoscopic, trees overhead, visible on the periphery of his vision, reduced to gray lines wavering on the watery surface. Breaking surface tension, looking for the muddy banks, the trees, he rose grinning, immortal.

If you would like to read more of Famous Last Lines by Mark Pearson, order your copy today.

Be the first to review “Famous Last Lines” Click here to cancel reply.