WINNER of the 2012 MSR Chapbook Contest 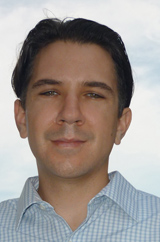 After serving as a crew chief the United States Air Force, William Lusk Coppage completed his MFA in poetry from McNeese State University in Lake Charles, LA. His poetry has appeared in journals such as the Oxford American and The Greensboro Review. Much of his writing focuses on the rural environment of the Mississippi Delta where he was born and raised. He now lives with his wife, Missy Coppage in Carolina Beach, NC. There, he works as a musician and freelance graphic designer.

With “South” as the only master his compass wants to obey, torn between finding his place in the world and finding his way back home, William Lusk Coppage is one of the few ambassadors of the contemporary south. These poems are a journey through the back roads, open fields, and blues bars of the delta as only a native knows it. In these poems are the intimate places that a child of Dixie carries with them no matter where paths of the earth might lead them. There are no tourists here, only the local sage, bare and unapologetic.

Reminiscent of Robert Wrigley’s Reign of Snakes, William Lusk Coppage’s collection Fantasies of Men examines a cultural definition of what it means to be male. Embedded in the Mississippi landscape, with “roadsides strewn with the gutted abdomen of deer and doves,” these poems sketch a land of farming, fishing, and hunting; of John Deere ball caps, possums, and beer. But Coppage’s work rises above the stereotypical, becomes instead a rumination on how we locate ourselves, on what we consider home. A memorable collection.

As the sun begins to rise over the broken tree line,
the field yellows like nicotine stained fingers.

Fog slowly falls, and I cannot see Father,
only hear, they come in low, hold your gun steady.

Last week I would have made Buffalo Bill
proud, cracking clay pigeons with a snap.

But as the first shots ring out, I am still
blinded by the mist. 3 o’clock, a voice shouts.

I spin. 12 o’clock, another yells. Raising my gun
to my shoulder, I fire blindly into devil red sun.

Voices gallop around me and the smell of sulfur
charges into my face. When I can finally see

next to me, Father brushes feathers from his shirt.
9 o’clock. Blood on his hands, he lifts his gun.

His love of death starts on Sundays. On those
odd mornings with hollow echoes of litany,
he snuggles the crook of mother’s side,
allowing only the corners of sight to puncture
the statue of thorns and blood. Afterwards,
hidden in his garage, he bends wire and frame,
ratchets the armadillo’s stiff neck up, up,
up. Nailing its feet in motion on driftwood,
he pays no attention to the collision inside
where mother cries, nor the door’s slam
and engine of his father’s truck. He only strokes
the grey, armored plates, loosening from the rot of skin
that pull taut over its new crudely carved wooden body.
It is in the beast’s dark marbled eyes
where the boy knows God, unaware and distant.

The cotton fields waltz with the wind
as if an AM radio stirs from beneath the soil.

Into the night, combines kick dust
high enough to hide the moon.

Morning reveals the used and naked rows
as trucks hook up their trailers and pull out.

Along the highways, loose cotton spills from its cages
and waits by the edges for next year’s dance.

If you would like to read more of Fantasies of Men by William Lusk Coppage, order your copy today.

Be the first to review “Fantasies of Men” Click here to cancel reply.