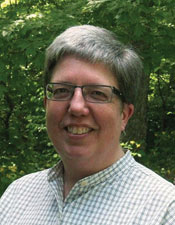 Lynn Domina is the author of a previous collection of poems, Corporal Works, and the editor of a collection of essays, Poets on the Psalms. She was born in Saginaw, Michigan and has lived in Alabama, Illinois, and New York; she currently lives the good life with her family in the western Catskills.

Lynn Domina’s latest book of poems Framed in Silence seeks nothing less than to reinvigorate Caedmon’s inaugural project for poetry in the English language-to sing creation. To that end Domina’s collection mingles science, theology, cosmogony, and myth in poems that combine a poet’s ear and eye for detail with a shaman’s ability to commune with spiritual realities in and through the palpable edges of the known world. Whether she is evoking God Herself comically lounging on a sofa, or enjoying the “good-natured prank” of the spotted woebegone, or evoking the life and obsessions of 19th century painter Edward Hicks, Domina relishes the enchantment of facts and the poet’s faith in words that would, and do, breathe “deep breath into a new creation.”

This is a volume of astonishing scope. Between the discomforting creation story that opens the volume and the closing meditative sequence on the painter Edward Hicks, the poet wrestles with questions of the autobiographical, with truth, story, and the lyric voice itself. Framed in Silence is a reliquary which opens to memory and muscle, appetite, desire and doubt, to heresy and abiding faith. How welcome is this new collection from the author of Corporal Works.

The poems in Lynn Domina’s collection Framed in Silence are dense, lush, and meditative. They are religious without being dogmatic and they do not sermonize. Instead, they posit. They suppose. The book begins with a vivid creation sequence where even the ferns and foliage follow the modernist dictum to “make it new.” But the novelty that Domina christens these poems with isn’t trifling; every stanza is ripe with the immediate physical imagery of this seen and present world, and the heady, spinning, glassy wonder of the hidden world to come.

The Earth and the Sea

As in the beginning
of most endeavors, the obvious choice revealed itself
unnecessarily extreme: when God gathered
the waters into a single basin, dry land
cracked open. Miniature cyclones choked God’s nostrils,
grit slipping under an eyelid God’s first
unpleasant sensation. Still, deserts might have use,
might be home to prickly plants, armored beasts.
Yet, what of jungle, bog, prairie, moraine, delta?
What of lush islands scattered across the sea
and streams of fresh water tumbling
toward the sea? The glint of river
over rock, prisms refracting new light, inspired
God to imagine crystals-tourmaline, fluorite, citrine, ammonite
shells clasped to limestone-and creatures
flickering through water of their own will.
A smoky flume, then molten rock
spewn from the sea called God to understand
this earth, this creation, to scoop out canyons
and bludgeon at craters, to expose
order impersonating chaos. The earth set itself
spinning, re-invigorating winds, the air
absorbing water as vapor, releasing it as liquid, monsoons
and hurricanes overcome with enthusiasm. Northward and southward
water alighted as ice and snow, crystals
beautiful as topaz, temporary as talc. Caves could offer
brief shelter, an angle of perspective, their ceilings
dripping stalactites, caverns narrowing to tunnels,
collapsing inevitably eventually, so that God
strolling above a bed of limestone recognizes the depression
and pauses, considering why the play
of erosion against such minerals should not provide
sufficient interest to christen this inorganic universe
a complete creation.

One December, crabapple trees tipped with frost,
river ice clouded and thick, I rode
shotgun while a boy I briefly fancied
gunned his maroon Ford through chokecherry bushes,
the steep bank a lattice of glistening branches.
His muffler grated against a swell of ice
as he rasped some country verse, but I remember
stillness. As ice cracked and his front end plunged
bottomward, I watched green water inch over chrome,
thinking how beautiful death is
now; in a few seconds I would panic,
gasping as water seeped around doors.
Someone, perhaps myself,
forced a window down. My body
surged toward the surface and I choked,
my throat stiffening against the fierce chill.
I’m told two divers dragged the boy
from his driver’s seat, his skin blue, translucent,
its luster appalling, delicate, taboo.

Straining for precision, I admit some details
I’ve invented, like the boy-I never fancied boys,
not even one briefly. There might have been a girl,
though changing sex seldom persuades-
one stumbles; the audience loses faith.
So there was no boy. Other details
I’ve imagined-the peculiar blue
of ice midafternoons, skin swathing the dead.
And the chokecherry-a taunt to death suggested
trees immured in ice, and chokecherry
evokes, doesn’t it, contained rage, inarticulate
grief, such as I felt once, walking
down a frozen river, alone, adrift,
not yet desperate enough to forsake
caution completely, my fear of drowning exceeding
my ache for death, its calm
exhalation, a sigh, a murmur.

I tell my students that life
involves suffering, that they suffer
because they cling
to their unsound desires.
They must relinquish
longing, I say, for hooped earrings, holographic
credit cards, for bacon cheeseburgers,
cocaine, more ring tones, more sleep,
better dreams, a national championship, better fathers,
grandfathers, mechanics, a truly decent breakfast place.
I tell them that they must stop
using the word fucking as an adjective,
that they must stop fucking altogether.
Receive your lover as a holy creature, I say. I remind
them that a lover’s body-linked tattoos,
tiny hairs softening forearms, twitching eyelids,
solid pectorals-is an illusion.
Right intention, I recite, right effort.

The young woman in plaid shorts
glances up from the cell phone
she believes she’s hidden
behind her thick textbook.
Are you a Buddhist? she asks, the only question
she’ll pose all semester. I stop pacing,
pivot, answer without pause.

I am not a Buddhist, I say. I am not
a Buddhist because my soul
remains immature. I accept nothing
with equanimity, not the garbage can’s
weight as I haul it to the road, the garbage truck
momentarily blocking my driveway, not my daughter’s complete
or incomplete homework, not prolific pole beans,
frostbitten chard. My own lover

I confess I fail to temper
my preferences. Nearly every time, I’d choose
silence to noise, liqueurs to liquors, evening
to morning. I’d choose fresh tomatoes over sun-dried,
a story before an idea. I admit
occasional pleasure in my transparently bad
intentions. I acknowledge my longing to leave
this world, its endless cycles
of frustration, though I’d like to bring along
two or three yards of topsoil, a body like mine but more muscular,
one long novel brimming with characters and subtext,
milk chocolate truffles, the constellation
ursa major, and while I’m at it,
every manner of bear, even the koala which isn’t,
technically, a bear at all.

Be the first to review “Framed in Silence” Click here to cancel reply.