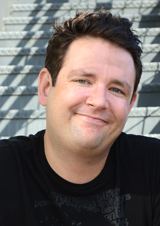 Cody Todd was born and raised in Denver, Colorado. He holds a BA from the University of Colorado and an MFA in Creative Writing from Western Michigan University. Currently attending the PhD program in English Literature/Creative Writing at the University of Southern California, he is working on a dissertation focused on rebellion and violence in works by Cormac McCarthy and Raymond Chandler. His poems have appeared in the Gettysburg Review, the Denver Quarterly,and Salt Hill among others. He is the author of the chapbook To Frankenstein, My Father from Proem Press and is the co-creator and Managing Editor of the online poetry journal The Offending Adam. He currently resides in Hollywood, CA with his wife.

“The cellar door tore back and forth applauding/and applauding”–there’s a shout to this book, a shine, an optimism born of appetite and exuberance, emergency and joy. While Cody Todd’s poems roam in content and approach, they’re united by the lyricism of his curiosity and imagination. “The truth is that ruin becomes gold brick,//even if this rubble anthem will crush us” –Todd’s poems are alive with this awareness and hold in their bones a memory of the kineticism of their making. It’s as if he’s announcing he will hold everything he knows he has to let go. Go hunger, go him.

Cody Todd’s debut collection Graffiti Signatures is imaginatively peopled, by the real lives of artist-icons like Mayakovsky, and Tupac Shakur, and William Carlos Williams, by fictive-lives-make real of Philip Marlowe or Ophelia, by friends and personae, by elders who are shades that cast shadows across the life lived, and, with an actualizing urgency, by the author himself, who says his “lies are many hats.” But the virtuoso variance of modes here isn’t a game, it’s how we most truly, multiply, live: just when a poem seems omniscient in voice, or settled in manner, it opens again to unpredictable and inescapable identity. Line by line the poetry not only thinks in images, its images question and query thought and motive. “Please redeem/ the trickery of the world,” one poem says. There is no trickery here, just the vibrating meridians of self- and world- awareness. This is a scrupulously beautiful book of poetry, one long in the making and well worth the wait.

“Imagine the mind / leveling the Big City for the sake of the heart” and you have Cody Todd’s Graffiti Signatures: traces of memory, remnants of twisters, “unforgivable winter,” “the fire that turns inward.” Bold, crisp lyrics and talk-story with the “dark angel, armed with light;” here is a survivor’s poetry, a lifeline to the vagrant heart. Like the best of James Wright or Ray Carver, it leaves us with a light to go on.

The passengers’ heads inside each train car
form a raiment of light. Remix that, wheels

on the tracks are one DJ Red Alert beat
smacked by the tongue on the roof of the mouth;

the collage comprised of hip-hop concrete
and these speedy snails of steel. Remix that,

if a train is a train, then a train is
a subway in the guts of one bad mother-

a woman running in heels, squealing breaks,
the tune of the second hand’s knock-knock ticks.

Remix that, the collage comprised of a gust,
behind the train, saluting the station and leaving

and knifing through the dark.

His name on a star, just as he wrote it
with his eye glued to a telescope
and his finger for a pen.
Science no longer matters. The bright side
to hacking cough is not: “A constellation

erupts from my chest each time!”
On our walk, he makes
habit of spitting on the ground. Ascending
the staircase to the observatory
is still possible. Of Jupiter’s moons, he says:
“I once pitied Io
but the wreckage of Ganymede
is all the rage now.” At night,

we bundle up to catch the Leonids
on top of his trailer’s roof.
His coat swallows him
like a cod and his hat
looks pinned to his head
at an angle. Things going on
in the night sky, all over.
The night sky, shivering for good.
A fool cries that death is
unneeded

and so must our fears return,
back to hell. “Dying man
resembling presidents on money,”
he says and apologizes to the air:
“Hell, I’m gone. May God bless you all.”

Listen, fall’s rain-song beating the ferns
and fronds. A mute airplane tearing through

the clouds. The night has caught goose bumps.
Its many-punctured flesh is the net

of prayer, for the dots on the i’s drop
to the floor like the heads of heretics.

I lean on my disbelief in the ghost horse
led by the walker, shrouded in his coat,

his blue disappearance beyond the ridge
of the descending canyon. Life could stretch

of history and its disorderly pages.
A raindrop only knows of one meridian.

A straight line. One half of the cross.

If you would like to read more of Graffiti Signatures by Cody Todd, order your copy today.

Be the first to review “Graffiti Signatures” Click here to cancel reply.