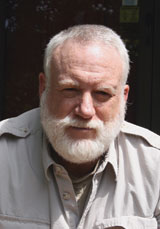 M. Scott Douglass was born in Pittsburgh, grew up there, in Wheeling, WV, but mostly in Erie, PA. He spent 20 years as a dental technician before founding Main Street Rag Publishing Company where he is now the publisher and managing editor. His poetry has been nominated for the Pushcart Prize and he was the recipient of a NC Arts & Science Emerging Artists Grant in 2001. His work has appeared in such places as The Asheville Poetry Review, Iodine Poetry Journal, and Southern Poetry Review (among others). He has a degree in Graphic Arts and has taught Graphic Arts & Graphic Design at Central Piedmont Community College in Charlotte, NC where he now lives with his wife. His design work has earned him two PICA Awards and was nominated for a 2010 Eric Hoffer Award. Life experience includes owning and operating a bookstore, coaching baseball and basketball, construction and demolition work, and breeding rats for the Pathology Department at the University of Pittsburgh. He even wrestled a lion, once upon a time. But that’s another story.

There’s a lot to love in M. Scott Douglass’s new book of poems, Hard to Love. The language’s vernacular precision–its unerring homage to who we are, what life is like, how time passes relentlessly as we cling frantically to its bucking back–is wonderfully, wholly authentic. These wry poems are funny, tough and provocative. Douglass possesses a keen and irreverent eye, an ear pressed to the burning road, the heart and soul of biker.

M. Scott Douglass is a poet in the spirit of Charles Bukowski–but better, more controlled. The sheer exuberance and profusion of his work is heartening, and each poem is filled with intelligence, wit, intensity, and raw energy. Ranging over his own life and the lives of those he loves, Douglass rewrites his experience in language that speaks the simple and heartening truth.

In M. Scott Douglass’s collection Hard to Love, the narrator quips, “doesn’t love fix everything?” Douglass knows it doesn’t, but he and his characters still long for the grace love brings. For a throng of modern-day posers–gallery crawlers, Drew Barrymore and Sinbad wannabees–Douglass offers parody rather than affection. He reserves a special kind of rage for media pimps–the Aflac duck, Ann Coulter, the Capital One barbarians–who send the rest of us limping to the mailbox like Charles Bukowski’s persona to find only a Visa card bill, and “a letter from the mortgage people.” Ah, but for those Beat down-and-outers–those who “cuddle a bottle of Jim Beam” or lie “naked on the couch, / a loaded revolver on the floor beside” them–Douglass’s poems are gritty valentines. In chunks of prose as solid as a “fifty pound, unabridged Holy Bible,” he reminds us why bikers and others living on the fringe can be “Angels,” offering grace even as they receive it.

Knowing Scott Douglass as I do, I usually know what to expect in his poetry, but after reading this new collection, I was blown away. This is his best work yet. These poems speak with honesty and sometimes brutal imagery of his younger days in Pennsylvania, remembering the pain and pleasures of adolescence, his hopes for the future, and the desperation of moving on, as he writes, “I got out with memories intact,/fear and respect for those I left behind…” Yet, this work is also contemporary, and draws upon our pop culture, intertwining images and language of television commercials, trends in electronic media, e-readers, the current political climate, and that icon of the road, the Mustang. Douglass reminds us we are human with all our flaws as he recounts the misgivings and misfortunes of friends and acquaintances, yet with wit and keen observation. I sense a profound respect for everyone he writes about, from the man with the big head to Oklahoma Jack to his traveling companion in Mustang Days. He frequently finds himself on the road, and in the end “…the light changes.” He writes, “A twist of the wrist/and I am thunder./I am wind. I/am gone.”

Read this collection. You’ll laugh. You might even cry, but you will enjoy it. Douglass may be Hard to Love, but you’ll love this book.

Scott Douglass has a sharp eye and an even sharper, irreverent wit, as evidenced in his new collection of poems. And he isn’t afraid to use his rapier tools at any location, from “Wally World” to a poetry reading at an art gallery to “the aisle at St. Luke’s,” on any individual. Hard to Love is peopled with the famous/infamous, including Bernie Madoff, Martha Stewart, Sinbad, and Ann Coulter, and a fascinating array of people we may or may not know, such as Sister Francis, TK the Chick Magnet, Oklahoma Jack, and a teenage girl “in a bunched metallic micro-skirt, bright red spandex top, shin-high space boots.” Oh, and not one but two appearances of “the man with the big head,” about whom Douglass asks, “Is it hard to love him?” Meet this poet at “At the Intersection of Boredom and Anxiety” as he gathers evidence about how hard to love we can all be, we, who by dint of our shared humanity, are all contributing to “an ever-evolving community canvas.” … Curious? Let the poetry reading begin.

They stake out their turf,
paint faces the color of poetry
then go through the motions

of practicing art. They seek
an audience in public places,
long to be the Marceau

of rhyme, the Tennyson,
Wordsworth or Frost
of their time. Performance

essential to the jumbled
jigsaw of letters and words
that tumble through air,

tongue-tied, evasive, craving
the elusive concept of craft,
an allusive rope of substance

to drop from the sky, lift them
hand over hand above the gray
gravity of sidewalk stages,

streets where even their own
family members avoid direct
eye contact, stepping quickly

around them as they fumble
endless attempts to climb out
of the same invisible box.

On the ground below, one pins
something long past struggling
to the ground with a talon
and shreds it with its beak.

Nearby, a sun-faded For Sale sign
leans forward in tall grass
on bent rusty legs.

There’s a lock on the door and
a note in the window of this vacant
American dream we pass each day
as we walk the dog.

Ten leathery heads follow us
down the road and back again,
wary of our presence, weighing
what options the future might bring.

WAKE UP CALL
for Congresswoman Michelle Bachman of Minnesota

She called it a message from God:
an earthquake and hurricane both striking
the nation’s capital the same week. She said
it was a wakeup call for Congress to change its
wasteful ways and I wondered why God waited
until Congress was in recess to deliver
such an important communiqué.

I also wondered if Michelle thought
the bridge collapse a few years back
in her home state was another sign
from God? God’s way of telling those
swallowed by the Mississippi River
to economize their journey? His way
of calling home the less frugal?

As I ride past the Baptist Church
at 6 am, I notice the glass-lit marquee
is blank. No service hours, no call
to worship, no biblical quote, no
words at all and I miss the comfort
of their presence in a way I would not
miss the silence of others.

“Because you can, right?” says a soft voice
from the passenger seat of my baby blue Mustang,
straining to be heard above the wind whipping
through open windows, “Thunder Road”
thundering from the speakers.

I just smile. She knows me so well.

In Memphis, I zipped a trucker
as we entered a construction zone.
He chased us all the way to Little Rock,
an angry road warrior from a B-movie,
leapfrogging other vehicles
to bury his bumper in our trunk.
I’d shoot ahead until he was a dot
in the distance, passively reel him in,
then dust him again when he got too close.

She clung to the overhead handle,
a subtle smirk on her lips, as we fishtailed
a u-turn at full speed to beat the traffic light
at Base Line Road. We cut off a kid
in a Ford Ranger curling
through the on-ramp. He slapped
his steering wheel, punched the air
with two fists and cheered us on as we
spun around and disappeared
back the way we came.

On a vacant stretch of Oklahoma back road
I tried to see how fast that car would go.
I shut it down at 130 when she whispered,
“How fast are we going, hon?”
the town of Foss rising above
the dusty asphalt ahead.

When I raced up behind a pack of bikers
on westbound I-40 in Texas, squeezed
them over at 110, tripping the radar guns
of two Wranglers on the eastbound side,
she turned a page of her magazine, said,
“You’re going to pay the ticket.”

The New Mexico state line was 20 miles ahead.
Those troopers had to go back 2 miles to turn around.
I said, “If we keep our current speed, they’ll
have to do 150 to catch us before the border.”
She laughed, “Okay, but if they do,
I’m not bailing you out.”

She rode shotgun through New Mexico
and Colorado where we tested the Route 17
drag strip up the San Luis Valley.
At Cripple Creek we hit a straight flush
on the nickel slots, scored enough cash
to cover gas for the whole trip.

We warmed ourselves on the hood of the car
at the frosty top of Rocky Mountain National Park,
then fell back to earth, homeward across
the Kansas flatlands. Missouri, Illinois, Indiana,
Kentucky, came and went before we crossed
the Eastern Divide on the twisting, broken road
from Tennessee to North Carolina.

She was there.
For the sprint to Fort Lauderdale
and back for a weekend wedding.
For that autumn romp to Charleston,
then Myrtle, then the Outer Banks.
She was there. My navigator, my co-pilot.

She knew I couldn’t resist, the day
I slid up behind a caravan of cars
politely following a ‘57 Thunderbird
on the only stretch of straight road
between Albion and Edinboro, Pennsylvania,
knew no narrow two-laner would keep me
from placing that classic in my rearview mirror.

We jumped all six cars at once,
paused to salute the driver of the T-Bird
as we passed.

Yes, it’s because I can. It’s always been
because I can, because we can. Because
sometimes the whole world is
a blazing blue blur streaking toward
an uncertain horizon and all you can do
is crank up the music, stomp on the gas,
and grip the steering wheel like the mane
of some wild, exotic thing. Grab hold
and go. Go so you don’t get left behind.
Go while there’s still a reason.
Go while you still can.

Be the first to review “Hard to Love” Click here to cancel reply.