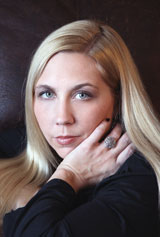 Amanda Reynolds can finally say she lives in Pittsburgh and works as an English professor. She also has her own small business working with horses as an equine massage therapist. She grew up an hour east of the city, and spent six years in Florida receiving her MFA from the University of Florida and PhD from Florida State University in Creative Writing. Pudding House Press published her chapbook in 2009 entitled Degrees of Separation. She has published reviews and poetry in journals such as Gargoyle, Schuylkill Valley Journal, The Broken City, and Mississippi Crow and served as the poet-in-residence of the Everglades.

A young poet with the soul of a much older one, Amanda Reynolds does for Pittsburgh what Carl Sandburg did for Chicago. Part history and part pure imagination, these incantatory poems take you to a place you’ll want to visit again and again, a vanishing world that, thanks to Reynolds’ keen eye and big heart, will now live forever.

“I see that the word of my city is that word up there,” Walt Whitman says in “Mannahatta,” his hymn to the beloved city. So, too, Amanda Reynolds searches for the word of her metropolis, Pittsburgh, by surveying its gutsy history and celebrating its icons: including Iron City beer, and Sidney Crosby, and of course a famous ketchup company. What results is an ambivalent love song and a first book filled with brash and spunky poems, each one steeled against sentimentality and yet full of unflappable American joy.

This lively paean to Pittsburgh is filled to brimming with its history, food, drinks, roads, rivers, families, sports teams, bridges, schools, local events, restaurants and more, interspersed with a surprisingly moving meditation on a failed love affair. It doesn’t take long, however, to realize that the passion at the heart of the book is for the city itself. A constantly surprising read, it delivers a wonderfully detailed portrait of this scrappy, vibrant place and of its scrappy and vibrant chronicler as well.

WISHING YOU WERE HERE

You can laugh, but I’ll take one look at ketchup
on your plate and tell you whether it’s Heinz.
When Mom gave birth to me, her focal point
was outside the window, a giant Isaly’s vitrolite sign,
and the Eat ‘n Park commercials are my favorite thing
about Christmas. I missed more of Pittsburgh
than I thought. I was too young to know it,
but the PETA protestors were naked behind signs
they carried down Fifth Avenue, and I was lucky
I’d left the fur coat grandma bought me at home.

Didn’t everyone hate Three Rivers? How damn mod
were those weekend warriors who didn’t realize
what they saw on stage in Brian Jones, soon-to-be member
of the 27 club. Even though Westview burned,
there’s still Kennywood where each day two tons
of corndogs swirl around stomachs on the Jackrabbit,
and grease from the potato patch fries makes it hard
to hold onto the Thunderbolt’s safety bar across your lap.
If someone tells you the park’s open,
check your zipper. The coasters are faster after dark.

Please don’t tell. I was the first generation born without
a Pittsburgh zip code. Dear Saltsburg, half an hour east
of all I wish I’d seen and done, I hated you every day.

In the 1940’s, an engineer, Joseph White, designed a system of roads to circumvent traffic around the congested downtown area in Pittsburgh. The roads form concentric rings around the city with the outermost being red, followed by orange, yellow, green, and blue. In 1995, a three mile purple belt was added downtown to highlight the city’s attractions.

After you I dated a boy who flipped
a quarter to decide it all:
fish or chicken, red or blue,
to cheat or not to cheat.
But that’s all too nonchalant
for me, so I choose the red belt,
largest and grandest first.
There’s no Virgil guiding me,
but I rock the classics on DVE loud.

I start out thinking how I’d like
to marry someone like Pittsburgh’s native
son, Mike Fink: “half horse
and half alligator” joked Davy Crockett.
But I’m only thinking this way
because you were in my dreams
last night again. Damn first loves. Damn you.
You, riding your bike eight miles
to my house when we were fifteen.
You, jumping from the roof of my dorm
with Mike in college. You and I, dancing
the night before I left for Florida.
Your living room spinning and us
in limbo. I’m driving to forget
you’ve found someone new. Driving
and thinking of Mike Fink
shooting whiskey glasses
from his woman’s head and dragging
keelboats up the river.
Oh to be drunk and happy all day long.

Quickly, I realize it’s a big joke.
These roads are too far from the city I love.
I need a map. The wind chill is fourteen
below, and the crossing guard
only comes out to help the cute kids across.
There’s a dead deer outside the gunsmith’s
shop, frozen creeks, corn fields,
and abandoned barns. It’s too much like
where we grew up. Like when Barry
jumped through the fire and we ended
up at the hospital. When Tim took
you, Laura, and I four-wheeling up the coal piles
and we smacked into that tree. Hard.
When you and Autumn were caught
parked in the field and everyone heard
about it in school the next day.
What level of hell is that punishment?

I imagined how I’d stop for lunch
at a cute café, take pictures of old mills
and meet the “locals,” but it’s too damn cold
to get out of the car except for gas.
I spend thirteen dollars and eighty three cents
on a map I don’t use. A black truck
follows me for miles, and all I can think
is how we drove for hours through back roads,
how I could drive to your house eyes closed.
I keep thinking how I shouldn’t tell this story.

I just want to get back home, so I take 28
past Pittsburgh Mills. When I see
the Highland Park Bridge it starts to feel better.
At the Veterans Bridge exit I’m really feeling good.
The city sits frozen and wedged in the rivers.
My new house you’ve never seen waits upon the hill.
It’s five days until Christmas and the sight of
the cold tall buildings feels safe and good.
Can you replace the love of a man
with the love of a place? I’ll be alright tonight.
HEINZ 56

Seems like I’ve been cooking
gnocchi and manicotti ever since
I asked Mom about the family tree.
You’re Heinz 56, she said.
Everything but Italian.
That time I picked
the most interesting
dish to bring to class: corn bread
for the Shawnee Indians
of the Ohio River Valley.

Now, sauce, rich with my parents’
homemade Valpolicella,
simmers on the stove all afternoon
in my steel worker kitchen.
Grandma makes the noodles from scratch,
and pizzelles are Dad’s favorite
Christmas treat.

They’re fitting contradictions.
What does the 57 in that ketchup
stand for anyway?
The number of ingredients? No.
The year of creation? No.
It’s John Heinz’s lucky number, five,
and his wife’s auspicious digit, seven.
Nothing special. Two ingredients.
Five and seven. Pasta and sauce.

Be the first to review “Heinz 56” Click here to cancel reply.