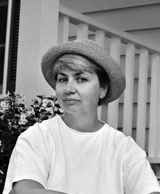 Jo Barbara Taylor grew up in Indiana and now lives in Raleigh, North Carolina. Her poems have appeared inMount Olive Review, Bay Leaves, Ibbetson Street, included in The Sound of Poets Cooking, Exit 109 andYou Gotta Love ‘Em anthologies, in Bee Culture, onNew Verse News, Dead Mule School of Southern Literature and in Broad River Review. Her chapbooks are One Or Two Feathers (fall 2010), Jake and Jill, The Story of a Marriage (summer 2011), and Cameo Roles (October 2011). She is a former English teacher and currently works as a freelance editor/proofreader.

In High Ground, poet Taylor shows us how the Alpha Company Marines, living and dying in the battles of Afghanistan, “become best friends with fellow/soldiers who may be our last friends.” From night’s rest, when the men remember a comrade lost in a vivid firefight, as a guitar player ends the night by “picking out taps,” we see those waiting at home like “Mollie Steele,” who writes “the less I know, the better I am” and a father asking a postal clerk about a package returned undelivered. Throughout, the starkly authentic language of combat shows how men become amped up in battle to their daily acceptance of death. Never have I found a chapbook like this–too rich a serving of powerful detail to be any longer than it is.

BOY AT WAR
He is twenty

on target or renegade,

looking for a home

that cannot be developed

Last night Scanzano strummed
his fuckin’ guitar for hours
into the low night, some quiet
Beatles-for Chong, who knows everything
about the Beatles, a fuckin’ expert-
plunked some mournful country,
a gospel hymn or two

We listened, sitting or stretched on cots.
The moon dappled us under camo nets,
our listening a mixture of sorrow, anger,
exhausted fear

Chong caught a burst of bullets at the edge
of a cotton field earlier. Wounded
under his left arm, blood clawed
through his vest. The medic said Shit.
But it’ll be fine. Chong gave us his
famous “Ah! So!” sign with only
his right hand as they loaded him
into the chopper

Two hours later he fuckin’ died.
No shit. We got the word at dusk.
Alpha Company weeps. Some sob,
some cry silent tears. We wallow
in the music

Scanzano played on and on,
and no one was willing to say
That’s enough, God damn it.
Finally, note by note,
he picked out “Taps.”

soldiers, civilians
a battle for hearts, minds
every patrol a promise
that life can be safe

crops can grow to harvest,
that a village will
stand tomorrow, blood
will not stain the dust

the world is created
in details- an old man
stoops with a load of reeds
on his back, a little girl

leads a huge bull, asks
a Marine for candy,
a dog lunges and barks,
the soldier lifts his weapon

defense, everyone defensive
staccato shots and belched
IED explosions vibrate
in the air, when fighting

dies down in late afternoon,
a farmer and his son
go out, pick some okra
to stew for dinner

The time-honored kite,
strung to sail
in a sea of sky
up, up a mile or more

now is tethered
to a lower flight,
for kite string
has a new use:

in weeds and dust
waiting for its target
a boot to trip,
tow the drag down

If you would like to read more of High Ground by Jo Barbara Taylor, order it today.

Be the first to review “High Ground” Click here to cancel reply.