Part love story, part political drama, part family tale Instructions for Living unfolds in an unnamed tropical country that has lost its fish in an eco-disaster. This is a lyrical story set in 1998 with vivid flashbacks of incidents twenty years earlier. Gabrielle, a young innocent who fights for her survival and later learns how to persevere in a different manner when she matures, is the narrator. Miguel, a one-armed father who engages in a variety of earnest and clandestine activities, and Gabrielle’s parents, both of whom are disabled in some way, are the main characters. Instructions for Living is a haunting and beautiful tale about laying bare our memories and trying to shape their meaning.

Love comes and goes, in politics there is no good or evil, and family constantly changes. All the events that affect Gabrielle also influence her neighbors, friends, strangers, and others. Flowers, music, handcuffs, accidents, and fish are small objects and distractions capable of altering the course of history for the characters. The book concisely describes how our individual and collective pasts affect the rest of our lives. 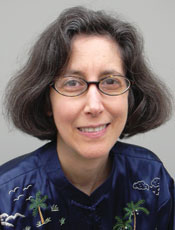 Laurie Blauner is the author of two novels, Infinite Kindness and Somebody, and six books of poetry. She has received a National Endowment of the Arts Fellowship as well as Seattle Arts Commission, King County Arts Commission, 4Culture, and Artist Trust grants and awards. She was a resident at Centrum in Washington state and was in the Jack Straw Writers Program in 2007. Her work has appeared in The New Republic, The Nation, The Georgia Review, American Poetry Review, Mississippi Review, and many other magazines.

She was born in New York City and has an MFA from the University of Montana. She currently lives in Seattle, Washington with her husband and two cats.

Instructions for Living takes place in the political past that could as easily be the future. It winds restlessly through a foreign island environment that feels immediately familiar yet remains full of mystery. It’s lyricism, framed in a densely suggestive texture, is arrived at by implication without unnecessary complication. A powerful and immediate portrait.

Laurie Blauner’s lovely story unfolds gently at first, its striking imagery and surprising love story gradually drawing the reader into her imagined world. As catastrophic events encroach upon that world, it is impossible not to feel with the characters their fear, their longing to connect, and their need to lay bare the past and shape its meaning. It is a haunting tale that is beautifully told.

Part One
A Country Without Fish

Twenty years ago, when I was a twenty year old girl, a man with one arm was rummaging through our garbage on a Sunday afternoon. He smelled of gardenias.

“Yours is the last house on the block. Do you mind?” His eyebrows were full and level with the top of our door.

“I remember when there were just fields here.”

He dug his one arm, his right arm, into our garbage, bringing up grapefruit and lemon rinds and scrap paper and ice cream cartons, reminding me of how easily we tend to forget the recent past. Done with one thing, we can only think of what’s next. “That was a while ago,” I said. “Pineapple and some rice I’ve heard.” He had hollow cheeks, dark hair and eyes. Handsome and imposing and busy.

“My father brought us armloads of pineapple sometimes.”

I could see a plain gold wedding ring on his finger flashing among the plastic bottles, a green cardboard package nestled next to coffee filters and dirty, paper bags. “Are you looking for something in particular?”

“Ah.” He pulled out a piece of smeared string and a small, glass spice container. “For my little boy.”

I watched as he wrapped the string around the jar with one arm and pushed it on the ground and wound it back up so it traced and retraced its steps. He put it in his pants pocket where it bulged. “Where are you from?”

“Oh, this. You mean this.” He looked at his empty sleeve. “It’s from fighting when I was young, probably your age. More than fifteen years ago.”

We both looked away, suddenly shy. I could see a streak of orange in the sky, a redhead’s strand of hair pushed away from a damp forehead. The horizon was still scrubbed and blue. It seemed like it was just waiting for darkness. Since that day the sky’s watched men kill each other and worse. I could hear my neighbors getting dinner ready, their voices, the silverware and plates complaining. Their pungent spices rose into my throat.

He took an already crushed gardenia from his shirt pocket and rolled it around in his fist. He extended his hand. “My name is Miguel.”

I shook his large hand. My own looked shrunken in his. His fingers chafed me. “Gabrielle,” I said. I drank in the enormous size of him, the way he was so gentle.

Later that night I could smell gardenias as I made my parents’ dinner, as I swatted at flies. I stopped my housework and smelled. He was still with me.

I wanted to tell someone about my dream yesterday, the day I missed the hurricane in a nearby county. But who was there left to tell? My parents were dead and Miguel was gone.

My father and I rested on a beautiful, lush bank where a stream snaked out from an overgrowth of large, weeping trees and vines and thick bushes. We rested and talked for quite a while and then I decided to explore where the stream tumbled from. I hacked through the heavy growth with my hands until I’d made a space and went through to discover a small pool of water with large fish hidden there. I watched them surfacing, their tan backs bumping the air, gliding back down beneath the water. They seemed too big for the pool but not unhappy in it. Moving constantly, nudging the tiny ripples circling outward. I walked around the water and returned to my father. Swarms of people came. People I didn’t know. They started going back, around the pond. Suddenly one person and then another returned from the pond carrying the large, dead fish. Finally no fish were left.

If you’d like to read the rest of the story, order Instructions for Living by Laurie Blauner today.

Be the first to review “Instructions for Living” Click here to cancel reply.