Late News from the Wilderness 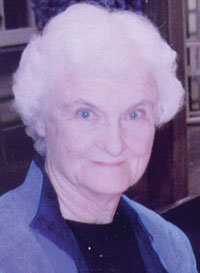 Elinor Benedict grew up in the mountains of East Tennessee, graduated from Duke University, later earned her M.A. from Wright State University, and even later–in her fifties–took an M.F.A. at Vermont College. She has published five chapbooks and a collection, All That Divides Us, which won the May Swenson Award from Utah State University Press in 2000. She has also published short stories and reviews. Her work appears in magazines such as Poetry,Shenandoah, Indiana Review, Florida Review andImage. She used to work part-time as a journalist, teacher, and founding editor of Passages North. Now she and her husband Sam spend their time in the wilds of the Upper Peninsula of Michigan and Lower Florida. They like fishing and traveling, often with their grown children and seven grandchildren.

In Late News from the Wilderness, Elinor Benedict gives us a rich cornucopia of images in a celebration of connections with family and friends, all leavened with affectionate humor and lyrically understated grief. These poetic communiques, posted from the rural Upper Peninsula of Michigan where she has lived for much of her married life, engage the complex resonances of “wilderness” in both theology and human experience, as well as in the fragile balance of the wild places that Thoreau elevated to archetypal American dimensions. Her lyric-narrative poems weave a fabric of myth and sacred stories in contemporary language against the backdrop of the Iraq War, environmental degradation and other signs of human intransigence, and also the quiet heroism of all those who seek to honor and preserve the legacy of nature and humankind’s place within it. These poems are rendered more urgent by a sense of mortality and of time running out-both for a prodigal, beleaguered world and for the poet and her dear ones in the acute awareness of life as a “blanketing of grace/ uncanny in its fall from no known place.”

In ’61, George Starbuck, commenting on Alan Dugan’s Poems, said, “Just reading his clear voice off the page makes me feel a lot better about ‘American.’ We’ve got language we haven’t used yet.” Elinor Benedict’s strongest collection to date, Late News From The Wilderness, uses the hell out of that language. If you’re looking for pastoral, this isn’t your book. If you’re looking for poems driven by a pandemic of interpersonal relationships, this isn’t it either. Or poems cast out of rural tragedy, local color, the autobiographical, or a diamond-clear expatriate moment driving a deeply felt and imagined insight you want to return to again and again–again, this isn’t it. Nevertheless, neighbor, if you’re looking for all of the above tumbling out of a gravelly undertow of language rendered in an enviable range of beautifully crafted voices and styles, then this is the brass ring.

Suffused with tenderness and gratitude toward the world to which her keen and lyric observations link us, Elinor Benedict’s Late News from the Wilderness is a book to read, and read again.

LIFE AND DEATH IN THE WILDERNESS

Is death
by bear to be preferred
to death by bomb?

–Maxine Kumin, You Are in Bear Country

Eden grew into a tangle of kudzu
trussing up the trees, first the leafy
Tree of Life, then the forbidden
Tree of Knowledge–only a spindly
bush, really, but studded with peculiar
fruit blushing like mangoes that looked
and smelled so seductive that Eve
invented the snake to justify eating what
wasn’t on the list of goods. Before

her appetite got her pregnant, she’d
twine around bamboo poles the dainty
feelers of green beans, her fingers white
as French asparagus, caressing sinuous
climbers in this paradise created by X
at the delta where the big everything
began. Delighted, she watched the bonnets
of bean-bloom turn into swords full of
seeds. So why did she need more? Why

do fragments of this lonesome garden
dismay city dwellers, who look out of planes
and call the Appalachians and Painted Desert
god-forsaken? True, Madame X and Dr. Z
disagree on whether wilderness is necessary
or scary. It depends, perhaps, on whether
grizzlies feed hidden on the other side
of blueberries, or unknown bombers
breed inside the gardens of ourselves.

Wildness is preservation of the world, said
odd Thoreau, although his camp was barely
wild and not so far from town. Here in slightly
wilder Michigan, in spite of bears and news
of bombs, I live to plant like Eve, both beans
and snakes bedecking rows with question marks
among tomatoes once called poison love-apples,
which I eat from vines dripping with seeds
both sweet and sour, as love may taste at times.

Behind the flaming swords, god-like knowledge
of good and evil seems hardly worth our hunger.
The garden at two rivers lies many times
interred, and the Tree of Life keeps on dying.
Yet it’s spring and I’m alive. The smell of earth
demands I drop and bury seeds. Let worms
rejoice, let green temptation grow in rain
to start beginning without end here in this
wilderness of wildernesses, this world.

Once my husband’s Dad, army new, marched
his son behind the family lawnmower to shouts
recalled from weeks of dusty training. Khaki
crackled under tightened belt as Dad, basic
crew cut graying only slightly then, bristled
through those years. Too old for overseas,
he manned a home battalion instead of
foxhole, but felt he did it right. When

war was done and kids weren’t what
they used to be, he’d slam the door
and take a walk. He didn’t know what else
to yell, the way they shouted back.
His two girls snickered as his only boy,
grown tall and surly, had to bend for Dad
to check his rumpled haircut. Red faced,
sweating across furred upper lip, the boy
finally wouldn’t stoop. His father nearly
hit him, then shook as though an army’d gone
berserk, or worlds of grass had turned
against him in one rampant weed.

Now they’re two gray men, one older
than the other, but both well-pleased
with what they see–a little of themselves.
Hands in loosened pockets, they lean
against the mantel and smoke old pipes,
pace their talk of weather with ceremony
as if slow marching to muted drums. Even
though they listen to each other’s voices, loud
but not commanding, they seem to hear instead
some faint, familiar music from high ground.

I watch the two together from another room,
becoming a judge of men, but moved to offer
them a kind of mercy. In two German mugs
left home by our oldest son, I pour their
favorite beer. Those two fathers now have time
to stand at ease, freed from what they thought
they had to do. They drink, look into their own
smoke, and wander into fields of silence.

NIGHT SCIENCE
Five nights I’ve frowned and stretched
my neck for northern lights, foretold
by science with its dizzy numbers
and instruments that whirr. Professors

at the Institute, guests of TV weathermen,
predicted them with films of telltale
spots upon the sun. They plotted
curves, turned day to night, and came up
with aurora. But I see nothing much,

only a sprinkle of stars. Yesterday the wisest
man in town–no scientist, no astrologer–
said he’d seen the lights at one a.m.
while taking out his trash. Fiery pillars,
the reverend said, or angels celebrating.

Still, all I see is same old sky. So tonight
I quit my vigil and seek my neighbor’s
lights, flicker of dry birch, shimmer of gold
whiskey in cut glass. Such company
makes do for cosmos marvelously.

But when I pick my way back home in snow
between our doors at two a.m., some great
Gomorrah blazes white above the pines.
Swords criss cross pulsing clouds
and curtains rip in two. What must

I do? In spite of cold and need
for sleep, I stand with open mouth
as if to sing the brilliant news.

Be the first to review “Late News from the Wilderness” Click here to cancel reply.