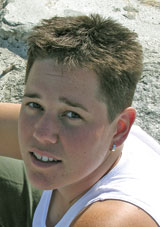 Stacey Waite
Stacey Waite was the winner of the 2004 Frank O’Hara Prize for Poetry for her first chapbook entitled Choke. She lives with her partner in Pittsburgh, Pennsylvania where she studies Tai Chi, searches for old clay roof tiles and walks through Frick Park with her greyhound, Rohen. She has been teaching writing and gender studies courses at the University of Pittsburgh for the past four years including courses titled Queer Theory, Writing and Consciousness, Fieldwork with the Body and Sexuality and Representation. Her poems have appeared most recently in Poet Lore, Nimrod, 5AM, West Branch,Chiron Review and Pearl. She enjoys tending to the ficus tree, ridding the yard of dead pine needles and sweeping the front porch.

Love Poem to Androgyny is a collection where exhilaration meets struggle meets rage meets deliverance into the complicated body—not the one the “mainstream” culture (think runaway strollers) would like us to have. Not the clearly gendered body, which no one has anyway—and who would want to be all one of anything? This woman/man thing has run its course—and it’s run right into the rolling, pressing, relentless lines of Waite’s poetry. This is work that drives its lines direct, in a clear voice—there is no coded language, no playing dress-up here. There is no mistaking Waite as she writes: …the rules/and the tools of the patriarch because we hate that arch,/the one above us as arches usually are as we walk/through and under, through and under. Waite’s brave work hammers that arch, cracking it butch, cracking it queer, dismantling that boring old thing once and for all.

Stacey Waite’s poems speak of and to “those without names,” and they speak of how inadequate the names we do have can be. In narratives that illuminate a speaker who is at various times viewed as tough girl and sensitive boy, little princess and prince charming, tomboy and gentleman, gay man and butch, sir and miss, Stacey Waite investigates the ways in which the fictions we tell ourselves and each other overlap with the spaces in which we try to make new names, in which we imagine a world where “our bodies” are no longer “rendered speechless.” This sequence of poems explores how our selves, so bound up in the language of gender, are taken for granted, taken away from us, mis-taken, even as the many beloveds in the poems are taken with the speaker’s androgyny. This chapbook is indeed a “love poem,” but this is no ode, no easy song of praise—rather, Stacey Waite has composed a collection fraught with the complexities and mutability of identity and desire.

When I imagine myself there,
I am gripping chromosomes
in each of my hands
and they burn, but don’t scar-
the amniotic fluid puts out
small fires in my palms.

This is before I knew
the names of things, before
the placenta’s song faded out
in the afterbirth, which
my father said
was usually reddish brown.
But your hands, he’d say,
were the color of steam.

whenever I am faced with my own body.
In my loose clothes and walk, you say
“secret” and “muscle.” Outside the dumpsters
are lifted and emptied. I slide the white shirt

over my head. Last night I had
the coward dream again, the airport,
Santa Fe, gun shots echo off
the women’s bodies. I stand
in the line of men who have to watch.

We all love you to begin with.
Then something happens. We become
a mother who races down concrete steps
to cover our daughter, riding her bike

topless, with a plaid blanket. All these years
you have been my skin though I am afraid
to say sometimes I don’t love you at all.
Sometimes, it is a man I love.

In the beginning was the word and the word
knows us. We don’t always return the gesture.

It’s like being born again, these metal detectors
are like traveling through the womb, the buzz
goes off to indicate the birth of trouble.
And the gender of trouble matters because
when a woman goes through, Jimmy yells,
“Female Search” and a large woman appears
from behind her security table. So when I walk through
and my wallet chain sets off the womb alert,
I wait. I wait for “Female Search” like I wait for the bus,
that hopeful and expecting look. But Jimmy takes me
himself. Jimmy slides his hands down the length
of my thighs, he pats his palm stiffly against my crotch.
He asks me to remove my boots and jacket.
And so I do. And at first, the woman in me goes unnoticed.
But when I hold my arms straight out
and he traces the outline of my underarms, he makes
that face, the face I’ve seen before,
the “holy-shit-it’s-a-woman” face,
the “pretend-you-don’t-notice-the-tits” face.

Jimmy’s hands change from a tender sweep
to a kind of wiping, like he’s trying to rid my body
of the afterbirth, he is preparing to peal off the skin of my body
as he would the apple he brings to work for break time.

Jimmy stares hard at the metal detector,
with a kind of respect like the arch of it became holy,
transformed me on my walk through.
Jimmy is nervous for the following reasons:

he has just felt the crotch and chest of a woman who he thought was a man,
he can not decide which way he liked her best,
his supervisor might notice he has not yelled “Female Search”
which he knows is grounds for some sort of lawsuit,
he’s angry, his blue uniform makes him angry
so that when he is patting her down now, he does it with force,
he wants her to feel he is stronger than she is,
he wants the metal detector to stop being a gender change machine
from which this woman, who is also me, immerges,
unties her boots slowly, follows all his directions.
And when Jimmy is done, he nods. He wants me
to keep him secret, to pretend neither of us had ever been born.

Be the first to review “Love Poem to Androgyny / Stacey Waite” Click here to cancel reply.