Playing the Pauses in the Absense of Stars 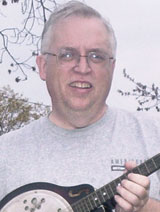 Martin Willitts Jr retired as a Senior Librarian and he is a former Jazz Mandolin Musician in upstate New York, where snow is possible in July. He has un-retired to become an AmeriCorps Member. He is a visual artist of Victorian and Chinese paper cutouts. He was nominated for 5 Pushcart and 2 Best Of The Net awards. He provided a haiku and origami workshop at the 2012 Massachusetts Poetry festival. He has over 20 poetry chapbooks and 2 full length poetry books including Secrets No One Wants To Talk About (Dos Madres Press, 2011), How to Find Peace (Kattywumpus Press, 2012), and No Special Favors (Green Fuse Press, 2012).

One of the best chapbooks I’ve read in years. Beautiful, haunting, sad. A chapbook that is gorgeously written and will have you thinking and questioning your own existence, as the author does: “Why go on? Why do we arrive only to leave?” Loss is loss, but until extinction, Playing the Pauses in the Absense of Stars must be read. It is the music between the pauses in life.

When you endeavor to read a poem by Martin Willitts Jr., be prepared to enter landscapes which are not always of this world. The speaker of these poems reconciles the natural world with larger, at times more metaphysical concerns, and yet doesn’t deign to be an expert on these concepts. He considers such concepts almost with the incontrovertible awe and wonder that would be native to a small boy–a particular sentiment that is required for any poet if he expects his art to translate as Martin’s does: originally, inimitably, and through the precision of a true artist’s lens. His words inahbit the world of one who is notably inquisitive, and admirably so. Like Frost and Emerson, his poems are deeply meditative, and like Marianne Moore, suggest that the poet is always the authority–the ‘expert,’ whether or not his claims can be proven by science, just as Martin speculates: “Within the smallest elements, things are unknowable…” and as he asks the rhetorical question: “Who am I to fill that space?”

Richly mining his background as a classically trained concert pianist living, now, in Syracuse, NY, Willitts’s latest collection showcases poems that are inspired and impressive, “–that hold me in place, in the music, jazz rift of notes fluttering–“. As for our “bone chilling” Upstate New York winters, which I can attest to– “It is snowing mandolins–.” “The snow is tuned in ascending fifths–“. He also writes movingly of father/son relationships and relationships generally. “Someone special has spun out of my orbit. There. I have said it.” The voice in these poems is compelling, resonant and standing close to each of us. Saying it. And so well!

–Gayle Elen Harvey,
author of Among the Fierce Eaves
Martin Willitts Jr’s collection, Playing the Pauses in the Absence of Stars weaves musical images through the poems in this new chapbook. Almost every poems has some thought provoking musical image that seems, on several levels, to challenge your usual way of thinking about it. There are mandolins in snow, music stanzas, pianos, requiems, sheets of snow, double pipes. Playing the Pauses, he explains is a jazz term and his explanation of what that means is key to many of the poems. Another title, “Music, Stars, Snow,” could also have been a good title. Snow, loss, the change in relationships, uncertainties, aloneness, longing, unraveling, absence gravity, ice white wind and memory, memories stud this interesting braid of music, poetry in a world of snow

Playing the pauses,
the flexible give-and-take
of minuscule fluctuations in rhythm
that make music “breathe” with life
is the same cadence my heart feels
when you call my name
and I cannot respond
because I am in between a heart attack,

there is that moment within moments,
the same tempo of uncertainty
knowing you will miss me
if I respond to that other distant calling

so I do not reply to either

your call holds me in place, in the music
jazz rift of notes fluttering
Mourning doves
in the breath within breath

the air is so heavy with responsibility

Singing In the Apron of Stars

I did it. I sang full-throttle
while the neighbors glared suspiciously,
and it felt right, annoyingly right,

the word “proper” did not fit into the scales,
nor “consideration” for melody or harmony,
or if the words were well chosen,
or if anyone listened to me,

I was liberated, for even a moment,
to do what my heart knew instinctually right,
and I was doing what I should be doing

I was clipping the hedges with hymns

Caterwauling, one neighbor judged,
but I could not help it,
I could not bear my silence anymore
and I needed to join the choir of nightingales
singing well past bedtime
into the apron of stars

I could not help it; my longing was so great,
so impetuous, I could not stop the ocean of song,
nothing could stop me, not dusk,
not coal-dust night

my throat came down with laryngitis,
until I croaked from my swollen belly

I sang, even in my sleep,
on bed sheets of music
beyond and into the A cappella of new mornings.

Living in the city, you cannot see stars.
We never understand vastness,
so we do not feel small as we really are.

My son pointed, what are those?
I tried to explain how stars made maps
of Greek and Native American myths,
like connect-a-dots. How navigators measured
to see where they were when lost.
How stars have moved over time
because the universe is expanding
and the north star is no longer at true north.
He looked at me incredulously, measuring
my latitude and longitude to see truth.
His eyebrow raised as constellations.

Living in a city, you forget simple things.
How stars are suns with more planets
with more fathers telling their sons
how the universe has infinite possibilities,
all you have to do is reach beyond what you see.

I had the absence of stars.

There is a lifetime of questions
and only a few minutes before it passes,
he would grow up and orbit further away
like the universe. I did not want to be a dwarf star
whose energy was gone and forgotten.
How can you measure such things with a sexton?

There are no myths in the night sky.
He was teaching me something
more numerous than the stars.

If you would like to read more of Playing the Pauses in the Absense of Stars, order it today.

Be the first to review “Playing the Pauses in the Absense of Stars” Click here to cancel reply.