Punching Through the Egg of Space 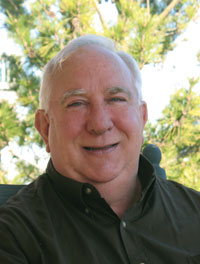 RICHARD ALLEN TAYLOR (Charlotte, NC), a former co-editor of Kakalak Anthology of Carolina Poets, is the author of Something to Read on the Plane (Main Street Rag, 2004). A graduate of the University of North Carolina at Chapel Hill, Taylor is a past president of Charlotte Writers’ Club. His poems have appeared in many publications including Rattle,Iodine Poetry Journal, Ibbetson Street, South Carolina Review, Wild Goose Poetry Review,The Powhatan Review, The Main Street Rag, and several anthologies. In 2009, he was awarded the Deane Ritch Lomax Poetry Prize for a single poem, “The Essence of Art.”

Richard Allen Taylor’s Punching Through the Egg of Space is a book of joyous affirmation, that takes the reader “along for the ride, each life/a comet punching through the egg of space.” Taylor will not let age or climate or disappointment in love dampen his capacity for feeling or for possibility. His poems depict his desire to dance to whatever tune the day brings, and to pay attention, as Mary Oliver asks us, to the small details of everyday life. His poems embody the gift of language and metaphor to celebrate life, a gift, as he says in his poem, “The Essence of Art,” that brings the writer and reader alike from tension to release.

Richard Allen Taylor’s Punching Through the Egg of Space takes us on a wild ride where our own planet becomes “a diminishing dot.” We find the flip side of the ordinary in the simplicity of saltines, which, “in a pinch … can be communion bread,” and in the paradox of the human heart: “… if we love enough to make love/bombs, how many would it take to save the world?” Taylor deftly balances a constellation of humor, gravity, and exuberance. His new collection is a song of joy, a “celebration plucked from a banjo made in heaven.”

I am gone away, lifted off,
hurtling through space
in search of the holy grail,
my back to the sun,
Earth a diminishing dot.
I leave everything behind:
Eve, the serpent, the garden.
I am a white-hot particle of dust.
I ride a wave of light.
I abandon comfort,
eschew the womb.

I radiate from the center,
head for a star
different from the one that birthed me
but this star calls my name,
ignites in celebration at my coming,
flashes its yellow plasma.
A celestial lighthouse
guides me through shoals,
for at this speed
small collisions are fatal,
time shrinks to nothing.
I travel a thousand years.

It is barely a blink.
My eyes sting from the heat of passing
through space I only thought was empty
but cuts and burns like blowing sand.
This makes me homesick
but I overcome it, mutate,
cleaned and polished by friction,
unsure
where I will stop
or if anyone will know me
when I arrive.

Lying on my back, eye lashes pinched
between finger and thumb, I pull back the eyelid
to make a pouch for the single drop
that falls like a water balloon.

Staphylococcus aureus, the most common
of bacteria, is everywhere, the doctor said,
but no one knows why or when
it will choose to establish a colony.

I try to trace back to the root cause.
After shaking hands at the funeral
I rummaged in my pockets for something
to wipe my eyes. Nothing found but
a napkin, folded so the fast-food logo wouldn’t

show. I dabbed with as much dignity
as I could, the germy paper smooth on skin,
rough on the eyes, everything connected
to everything else.

They missed the runway by three miles.

Now I am riding a distant ripple from that shock,
floating in bed, on my back, aiming the dropper
from point blank range, too close to see the drop
hurtle past the eye, splatter on my cheek.

If we ever lost the number three, then two
might be a crowd and trouble would come
in fours. Triangles would be missing

a side, two lines pointing somewhere, or nowhere.
Pythagoras would become puzzled, perhaps
unemployed with nothing to ponder, no theorem to sell.

Secondborn children would be followed
by twins. There would be no third-party candidates,
no rebellion against the two-party system, or else

limitless candidates would lead us to anarchy.
Each century would have a gap, the missing years
absent as a lost tooth. Imagine the rise

in tricycle accident rates, as small riders, suddenly
minus a wheel, go hurtling over their handlebars.
There would be no “other woman” or “odd man out”

and with the three gone, all its multiples could not exist,
meaning that nine, twenty-seven, eighty one et cetera would disappear.
There would be no cubic feet, no cubic anything-

not even ice cubes to chill your drink. We would all miss
the third dimension, become flat people crawling on a map
of the world. And if you think that’s bad, try removing

every third line. We should pray that the most important number,
zero, will be safe, but first it will be necessary to decide which one
of the Holy Trinity we can do without.

Be the first to review “Punching Through the Egg of Space” Click here to cancel reply.