Salt in the Sugar Bowl

When Sophia Sawyer walks away from her six children, she is convinced her husband, Hunter, has enough will and power to keep them all afloat. She boards a bus and doesn’t look back—never considering how her absence will actually color the lives of her children. Salt in the Sugar Bowl takes a snapshot of each of the Sawyer’s offspring—years after Sophia’s disappearance. Years have passed, but the wound of losing a mother will resurface time and time again, as they struggle to live, love, and trust as if their hearts were whole and unscarred. 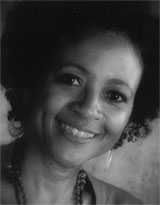 Angela Belcher Epps
Angela Belcher Epps’ writing examines the complexities of life–navigating family relationships, surviving death and abandonment, falling in and out of love, awakening to truths or lies that alter one’s journey. Epps believes writing is life’s most effective clinic. She holds a Bachelor’s Degree in English from Hofstra University and a Master’s Degree in English/Creative Writing from New York University. Her stories and essays have appeared in several journals, anthologies, and magazines. Epps is currently completing a novel titled Out for a Ride. Although born in Brooklyn, New York, she spent much of her early childhood in eastern North Carolina. She moved back to New York at the age of 10, but now lives in Raleigh, North Carolina.

Salt in the Sugar Bowl is an engaging novella that is full of tension, gripping dialogue, and a moving plot. Angela Belcher Epps is a rare writer whose writing is eloquent, courageous and candid. She has written a memorable story, which wonderfully handles intergenerational issues, siblings’ ways and abandonment. This book is a meditation on family, community and
the struggle for prosperity.”

An appealing, absorbing tale of abandonment as it reverberates through the generations and branches of a working-class American family. Deftly Epps brings us inside one vivid, fascinating character after another. You’ll care about these people; you won’t want their story to end.”

Sophia was trembling by the time she took a seat midway the Trailways bus. Her jaws were clamped. Her teeth rattled as if chilled by flu. She stumbled down the aisle to the first empty row. She did not want a seatmate. Sophia sat bolt upright, too tense to lean back. The bus had traveled more than thirty miles before she moved beyond the shock of what she’d done. She drew in a long, sharp breath, held it, covered her mouth with her hand. If she could’ve ended it all right there, she would have. Simply elect not to take the next breath. Have it known that Sophia Sawyer died on a bus, unexpectedly, thirty-five miles from her home.

It was just after 2 p.m. when she got off at the coastal town of Norington, a place where she was certain to find a job, just as her cousins had a decade ago. Throughout the year, tourists gravitated to the clean, matchbox town where bicycles were more commonplace than cars. Anybody who didn’t mind work could survive by serving the endless stream of vacationers. She stepped off the bus. Her American Tourister suitcase sat on the sidewalk. Sophia was oblivious to the palm trees and rows of pastel hotels, motels, and inns spotlighted by a ferocious April sun. The crowd cleared, and she sat in a faded plastic chair on the side of the building. A dozen yards away a man dozed, his chin tucked fowl-like onto his chest. A barefoot woman with sun-streaked hair sat on the curb smoking. All was calm. The damp, salty air bathed her lungs and Sophia’s blood warmed. Her thoughts settled for the first time since the storm had arrived at her door four days before.

* * *
That storm had come in the form of a social worker knocking on her front door. In her arms was a not-walking baby, and by her side was a small child. The first thing Sophia noticed was how the young woman held the baby like a bag of groceries seconds away from slipping to the ground. Her instincts made her reach for the baby girl, but in a swift heartbeat, Sophia glanced down and recognized the double dimple on the little boy’s chin. She instantly knew they were her husband’s children. Sophia’s arms dropped heavily to her sides. The social worker, as green as scallions, said with tears in her eyes, “Excuse me, m’am. My name is Tracy Dalton. I’m here because their mother has suffered a breakdown. She had some kind of fit—and it wasn’t like epilepsy. It was not medical. The neighbors called it a fit.”

“They took her to the facility in Goldsboro. The woman’s neighbors knew that Hunter Sawyer is their father, so that’s why I’m here with the children. Is he home?”

“I’m guessing he probably will come soon. My supervisor called and said there was an urgent matter to be discussed and to please meet us at his home.”

“Does he know you have the children?”

“No m’am. We thought it best to explain the situation in person.”

Sophia wondered who made such decisions, and what they based them on. It didn’t seem best to her at all.

“Come in and have a seat,” Sophia managed to utter then, with brine clinging to her throat and heat brewing behind her eyes, retreated to the kitchen and proceeded to scrub the bottoms of her pans. What does this mean? Sophia asked herself repeatedly. These children, innocent as they seemed, were in the process of stealing the life she’d been living. Maybe this is what should be. When more than an hour had passed, she offered the woman and the small child water.

Later, after her children returned from school, Sophia could no more explain the three strangers sitting in their living room than she could explain gravity. So she dispatched them all to the back, and sent the older one to retrieve the youngest from the babysitter. Sophia joined Miss Dalton and the children (whose names she purposely didn’t hear) and sat quietly in the armchair looking like an unhappy guest in her own house.

The baby slept in the social worker’s arms, and the bigger one played patiently with his fingers until Hunter, slick with sweat and machine oil, opened the door and stepped into the room. The boy automatically sprang up and hopped, screaming, “Daddy Daddy Daddy Daddy Daddy!” Hunter reached down and scooped up the boy with a grin, saying, “Hey, boy!” Then, remembering his whereabouts, his eyes surveyed the room. Sophia held his gaze for a mere second before leaving the room. This wasn’t going to be her business.

That evening Sophia paid little attention to the integration of the two babies into their crowded home. Not one angry word passed her lips, not a tear dropped. Sophia did not meet Hunter’s eyes, and he offered no words of explanation or apology. Nearing bedtime, he’d said, “I’ll sleep out here with them till we figure out what to do.” Sophia nodded. This definitely was not going to be her business.

Years earlier, it had dawned on Sophia that Hunter despised her a bit. He couldn’t seem to get beyond it. It was not the kind of despising visited on an enemy. It was the kind reserved for grave inside disappointment—like having to wheel your crippled grandmother to the park everyday while everybody else was just hanging out having a good time. That’s what Sophia imagined, although she never had such a grandmother, and Hunt had never said such words. Yet Sophia believed Hunter wanted a better wife, one that satisfied him more. His chronic dissatisfaction had paved his path to other women. Sophia hadn’t a clue how many, but there were a few that she, and everybody else, could identify. She never blamed him for it, and always believed the problem rested within herself. It was nothing she would try to explain to anyone else because they naturally saw him as the wrongdoer. But Sophia was the one who had been taught to pretend.

When Sophia turned eighteen and began cashiering at the A&P, Her mother, Devora, continually encouraged her only child to outdo herself. She coaxed Sophia to spend entire paychecks on form-fitting dresses. When Sophia dated someone more than twice, Devora would encourage the boy to stay for dinner, then pass off her own cooking as Sophia’s. And every Friday she handed Sophia a fistful of dollars from the petty cash can to get her hair fixed. Devora’s steady doses of advice fell on deaf ears because Sophia never got the knack of any of it. But Devora kept up her lessons about matching colors and patterns, and highlighting and shading as she applied her daughter’s make up and pressed on Sophia’s false lashes, and dabbed on drips of Beautiful and Red Door perfumes. Devora made all Sophia’s dates worthy of prom night.

Hunter Sawyer was blind-sided by the glamorized Sophia among the drab selection of women in their small town of Haden. In less than six months they were married at the Hope and Savior Baptist Church with a feast for seventy-five in the church dining room. Both Sophia and Devora were pleased at the good-looking, hard-working Hunter. But 19 year-old Sophia had not contemplated the consequences of her deception. She couldn’t match colors, or bake a chicken unassisted, or apply false eyelashes on her own.

In no time, Hunter was puzzling over why the meals all carried a strangling dose of vinegar when a short time ago he’d found pleasure in every forkful. Then when Sophia gave birth to their first child, and she had no paycheck coming in, Hunter looked sideways at how her hair always seemed to settle into something akin to a rooster’s comb. Then, shortly before the birth of her second grandchild, Sophia’s mother died from a massive, after dinner heart attack. Without Devora’s coaching, the baby weight clung to Sophia’s stomach and thighs. There were no form-fitting dresses to accentuate her new, maternal shape.

Hunter’s disappointment was palpable. No more long, sucking kisses. No unexpected grabbing and fondling in the kitchen. Sophia hadn’t any tricks up her sleeve, and no money for mirages. So Hunter had ultimately won himself a lesser prize than he’d expected. Disappointment was a heavy weight to carry throughout a marriage of 17 years.

With each child born, Hunter had taken away more of his affection. He got tighter with his money. If they went somewhere, he wouldn’t help her get their children in and out of the car. Sophia’s feelings about her husband numbed into a detached acceptance. She recognized, however, that their children loved Hunt, adored him even, despite his surly ways. So from the corners of her eyes, she watched him. Behind her back, he would give them extra money, tell jokes, and give them a push on a swing. From the kitchen window, she saw him teach Boyd to ride a bike. She glanced in the rearview mirror and saw him bend to tie Eva’s shoe. Coming down the hallway, Sophia overheard Hunt ask Irene how much money she needed for the high school dance. But he never let Sophia witness such acts of love directly. She concluded that he was much, much kinder when he was alone with them. Maybe then he saw less of her and more of himself in his children.

If you would like to read more of Salt in the Sugar Bowl by Angela Belcher Epps, order your copy today.

Be the first to review “Salt in the Sugar Bowl” Click here to cancel reply.