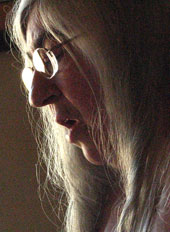 Helen Losse is a Winston-Salem poet and Poetry Editor for the online literary magazine The Dead Mule School of Southern Literature. Losse’s poem, “Four Snapshots of the Sea-Going Boats” won first place for poetry in the 2009 Adult Writing Contest of the Davidson County (NC) Writer’s Guild. Her poems have been nominated for a Pushcart Prize and twice for a Best of the Net award, one of which was a finalist. A former English teacher, Losse has a BSE from Missouri Southern State University and a MALS for Wake Forest University, where she wrote her thesis on the redemptive value of unmerited suffering in the life and works of Martin Luther King Jr. Helen’s other books include Better With Friends (Rank Stranger Press, 2009) and two chapbooks. Her recent poetry publications and acceptances include The Wild Goose Poetry Review, Main Street Rag, Iodine Poetry Review, Blue Fifth Review, The Pedestal Magazine, ken*again, and Literary Trails of the North Carolina Piedmont.

In Seriously Dangerous, as in her other work, Helen Losse shuns the commercial world in favor of the natural one and remains stunningly true to herself and her spiritual vision. As she notes in her seminal poem, “Where Light is Going,” “It would be easier to speak as others believe,/not to feel the ocean’s intentions nor to sense/the pull of the moon.” And indeed, the success of Seriously Dangerous is contingent upon Losse’s refusal to accept that easy path.

Tim Peeler, author of Checking Out

In her latest book, Seriously Dangerous, Helen Losse writes “watching a sunset becomes the home/to which I must return”. Her images embrace close observations of both the natural world and of human nature, of love and of losses. These are poems that examine observations to reveal truths otherwise unseen. Losse returns again and again to times when one feels at home in the world and to the times when one doesn’t. A reader will no doubt find poems like I did to return to again and again.

With the keen observations of a naturalist and the reflective probing of a theologian, Losse’s poems unearth epiphanies from ordinary life. Seeing Queen Anne’s Lace or a Dried-Up River Bed become occasions for spiritual renewal and revelatory wonder. Losse invites her readers on a soul’s journey from mountain peaks to valleys. Her collection Seriously Dangerous is like the liturgical dancer that holds the candle, and whose performance rises like incense. Losse’s poems dance and sing the spirit alive.

The squeals of sweet
children filled the playground,
now fenced.

It had been over forty years
since I had seen Margaret,
seen her red hair, played

on the gravel. It had been
over five decades
since we were students

in this school that seemed smaller
than either of us remembered.
We peered into rooms that

earlier we had not dared.
We had our picture taken
in front of the drinking fountain,

overlooked–as we always were–
by old-fashioned angels.

The evening begins with kudzu–
summer memories submerged
in a deep southern swamp–
where spirited black boys, old dryers
bob beside alligators. Late in hot night,
flashes of yesterday surface in pain
like the prick of a thorn, the mock
of a crown that continues its burn.

Low whispers, deep shadows remain
where trials by fire have left actual trails
after a tromp in slime & muck,
with tell-tale footprints from society’s
work boots. Seriously dangerous,
the cross without a savior–
deniable today, but for masks, hoods–
cannot burn away filth & dross,

nor wash us clean, ’til truth bleeds.

On rocks’ underside,
sleeping in soft dirt,
earlywigs roll themselves
into balls. Scent of musty
earth floats upward,
and they scurry to get away–

wishing to live in peace.

How can I justify
this abruptness of sunlight?

Nothing is pure
among thin shadows.
A chill invades me,
and I cast the rock aside,
falling to my knees,
as though my action
might proclaim my innocence.

But who will listen
while I explain–
crying a plaintive cry
to a lonely field
where summer is dying?
Those grubs lie still.

Still. With no premonition
of autumnal joy.

Those grubs lie still
beneath the lifted stone.

Be the first to review “Seriously Dangerous” Click here to cancel reply.