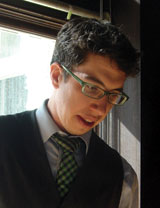 Shortly Thereafter is Colin D. Halloran’s debut collection of poetry, though his poems and photographs have appeared in print and online in the US and Europe. After serving with the US Army in Afghanistan, Halloran completed his BA and became a secondary English and French teacher. While teaching, he earned his MFA from Fairfield University, though he left the profession to complete his manuscript and develop a lecture/workshop series. He now spends his time writing and traveling around the country leading workshops on understanding war through poetry. He is based in Boston where he continues to be an advocate for veterans and civilian education on veterans’ issues.

To achieve not just perspective, but an authentic and convincing point of view required both a highly disciplined sensibility and a risky willingness to put into articulate detail that which most veterans cannot speak of, let alone write about when in the theatre of war. With a sure and deft hand, Colin created a multitude of forms perfectly suited to his material and what resulted was a work of true importance.

Long after official reports on the war in Afghanistan are forgotten, Colin D. Halloran’s collection — brimming with human detail and demonstrating a mastery of juxtaposition — will still resonate. It should be required reading for any public official eager to send young men and women off to battle.

Colin Halloran’s debut collection, Shortly Thereafter, serves as a natural extension of his ongoing work with veteran’s issues and education. The raw and immediate quality of these poems reinforces the fractured and dislocated self that inhabits the uniform—the self that carries the rifle, the self that returns ‘home.’ It is testimonial poetry, the poetry of witness, poetry centered in the narrative “I.” In the lyrical “Carnivale, Tarin Kowt,” where two spaces are crafted into one temporal frame, Halloran offers a glimpse into the books he will write after Shortly Thereafter. I’m looking forward to the collections of poetry that Colin Halloran will, given time, offer to us all.

Each soldier is issued a footlocker –
approx. 32 ½ x 15 ¾ x 13 ¾ ” –
for personal effects:
clothes, magazines, movies, mementos
of a home they’re leaving behind,
or essentials like cigarettes and jerky.

Pornography and booze have no place
in these silver-latched intimate havens,
they violate General Order 1.

Each person’s is different, though
there are some items found across the board,
namely baby wipes and sunscreen,
but they say you can learn a lot about a man
from his box’s contents.

My box is my own.
A five pound jar of Skippy,
the latest issues of Surfing and Whitewater —
so at least my dreams are not left dry in the desert —
most of the remaining space is dedicated to an infantryman’s anomaly: books.
I can’t seem to go to war without Shakespeare, Uris, Whitman, Keats.
I am not a typical grunt
is what my footlocker says.

It is not the chronically ill who pass through these doors.
The beds are not filled with the old and infirm.

In them lie the ruined bodies of youth,
their faces so recently lit by the desire for
candy
pens
clean water
soccer balls
a new team to play against.

That’s the spot he ran to.
Where he came to say hello: a wave and a salute.

I drive by it every day.

I sped down this road,
escorting bodies back to the hospital.
broken youth, behind burned uniform.

Bloodied soldier tight-roping consciousness,
then the boy: arteries so cleanly cut
as shrapnel raced from ground to chest.

They cracked his chest,
the surgeon tenderly caressing the tiny heart,
gently coercing it back to life:
soft palpitations to return color left to the sand.

It beats on its own.

The lungs are a different story.
For two days machines insist on life.

A coloring book, a doll:
a smile.

The lungs follow the heart,
filling on their own free will.

Machines are reattached.
The smile in his eyes
begins to fade.

That’s the spot.
I drive by it every day.

French for ‘small cigar’,
ignite and let smolder,
like memories.

Post firefight, one slow
long drag will ease the
stress, unleash the mind.

On a cool night’s watch,
beneath the cover of a cup,
inhale to stay awake.

But when all is done,
and little said,
and battles are behind us,

we smoke to help
our hands forget
the weight of rifles.

Be the first to review “Shortly Thereafter” Click here to cancel reply.