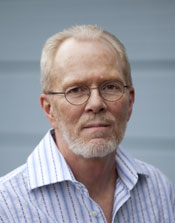 Award-winning author and Pushcart Prize nominee Bob Strother has had over sixty short stories appear in literary journals and magazines. His collection of stories,Scattered, Smothered, and Covered, was published in 2011 by Mint Hill Books/Main Street Rag, and he was the recipient of the 2012 Hub City Writers/Emrys Foundation Fiction Prize. Strother is a contributing author forSouthern Writers Magazine.

I love writing rich with detail, humor, and grit; writing peopled with characters I want to hang out with the minute we’re introduced and will miss as soon as they’re gone. I love a writer whose voice is so confident and vision so sure I’m snagged at the outset and unable to let go until the end. Shug’s Place is such writing, and Bob Strother is such a writer. Think 1980’s Detroit; picture a blue-collar bar owned and operated by Vietnam vet, Shug Barnes. Go on in and order a beer. Meet Leon, who’s always got Shug’s back. Shake hands with Darcy, the lady cop on the hunt for a serial killer. Shoot the breeze with the old soldiers in the corner–they look out for their own. But steer clear of that Weatherman tying up loose ends. This is writing with heart about characters with soul. Take it to the beach or curl up with it in front of the fire. You’re sure to enjoyShug’s Place.

Shug Barnes is empathetic, wise, and loyal to a fault. He’s the guy you always want to have your back, especially if you’re ever in over your head–and his Herculean partner, Leon, and perspicacious cat, Midnight, make the perfect addition to his able posse. I love this tightly woven collection of tales—and I’m betting you will, too.

By Any Other Name

The drifts had built to three feet in some places and snow clung to the big plate glass window in a shimmering array of silver-white patterns. It was almost five o’clock in the afternoon and the light was going fast.

Shug put on a fresh pot of coffee and slid onto a battered oak stool next to the cash register. He wore his brown hair pulled back in a short ponytail, his way of eschewing the trendy perms of the 1980s. Sun-etched crinkle lines at the corners of his eyes made him appear slightly older than his thirty-five years. He finished counting the register change and did a quick inventory of the back bar supplies and coolers.

“Yo,” came the reply from the combination office and storage room located at the rear of the bar.

“We could use another case of Molson’s.”

Leon worked first shift at the Buick-Olds-Pontiac plant in Southfield, a few miles north of Detroit proper, and moonlighted nights and weekends with Shug, doubling as bartender and, when needed, bouncer. The latter wasn’t often because Leon could intimidate the rowdiest of customers. He looked a lot like the actor who played Shaft, only bigger, and he’d spent four years in the Marines with a Force-Recon unit. His toothy smile could be engaging or scary as hell, according to the situation, and his dialect varied from educated to “street” depending on his mood. He slept five hours a night and ran five miles every day.

Shug took the case of beer from Leon and slid back the brushed-chrome top of the cooler. At first, he thought the blast of frigid air he felt came from there, then realized someone had opened the front door to the bar.

The girl hung there in the open doorway, snow in her hair, eyes roaming over the mostly unoccupied booths and tables. Shug thought she was cute in a wet, Rat Terrier sort of way.

“Close it!” Leon yelled. He turned to Shug and mouthed the word, “Hooker.”

Shug took a longer look. She was somewhere between sixteen and twenty-two, with frizzy brown hair and way too much makeup. She wore a white, fake-fur coat that stopped at the waist, a tight black skirt barely covering her stock in trade, and strappy heels that practically guaranteed she’d bust her ass on the icy street outside.

She looked over at Shug and Leon and said, “Huh?”

Leon pointed to the open door behind her. “The door,” he repeated. “Close it.”

She did and then turned back to the men. “I’m sorry. I wasn’t sure if you were open yet.”

“Oh, we’re open all right,” Shug said, waving a hand at the nearly empty room. The retirees had cleared out, gone to wherever they went for their five o’clock suppers and early bedtimes, and it was too early for the influx of office workers. “We’re just going broke.”

She walked to the bar, looking awkward in her high heels, and slipped onto one of the leather-backed swivel stools. “I’ll have a rum and Coke.” She dug into her purse and pulled out a pack of Virginia Slims.

Shug leaned over the bar on his elbows. “How old are you?”

She held her cigarette up and he lit it for her with a match from one of the small gold-foil boxes dotting the length of the mahogany and Formica bar. Leon rolled his eyes and disappeared into the back.

She blew a plume of smoke toward the ceiling. “Twenty-one.”

“How about a cup of coffee instead?”

“No, honey, I own this place. And if it’s okay with you, I’d like to keep my liquor license.”

She picked up the matchbox and looked at the lettering embossed on the foil. “You’re Shug?”

“Uh-huh.” He placed a cup and saucer on the bar and poured coffee for her.

“My mother called me Shug-short for Sugar-when I was a kid. It stuck.”

“Oh.” She took another drag on the cigarette. “So, Shug, are you a sweet guy?”

He grinned. “Sometimes. What’s your name?”

“Rose.” A corner of her mouth turned up. “Roselyn, actually, but I like Rose better.” She gulped down a third of the coffee and slid off the stool. “I gotta start work now. Thanks for the coffee.”

“What?” he said. “You’re not gonna pay?” He watched the color rise in her cheeks as she began to fumble in her purse. “Rose?”

She looked up at him.

She gave him a grateful grin. “Thanks, Shug.”

He called after her as she pulled the door shut behind her. “Don’t bust your ass on the ice.”

…..
Jeffery “Shug” Barnes had served four hitches in the First Air Cav, including a thirteen-month tour in Viet Nam. In 1979, he invested his reenlistment bonuses in Apple computer stock. When he mustered out in the fall of 1981, he had enough money to make the down payment on a small neighborhood bar not far from Tiger Stadium in Central Detroit.

Shug’s Place drew a steady group of regulars. Not exceptionally profitable, it still provided a modest but comfortable living for Shug and his long-haired, feline live-in, Midnight. If asked, Shug could not have said for certain whether Midnight was male or female. There existed between the two a certain measure of respect and a mutual appreciation for privacy. Neither was going to comb through the furry parts of the other over such inconsequential and irrelevant information.

Unlike Leon, Shug slept as much as possible and didn’t walk, let alone run, anywhere he could drive his two-year-old ’85 Oldsmobile 442. Thus far, his indolence hadn’t overtaken his metabolism, but he’d recently begun a careful scrutiny of his waistline.
If you want to read the rest of Shug’s Place, order your copy today.

Be the first to review “Shug’s Place” Click here to cancel reply.