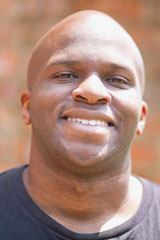 In a perfect world, Jason McCall would be a professional wrestler from Parts Unknown or a Justice League villain from an alternate universe. In this imperfect world, he is from the great state of Alabama, where he currently teaches English and Literature at the University of Alabama. He holds an MFA from the University of Miami, and his poetry has been or will be featured in The Los Angeles Review, Country Dog Review, Cimarron Review, New Letters, Mythic Delirium, Fickle Muses, and other journals. Silver is his first collection.

McCall’s poems are stirring because they stretch pithy observations–“It is hard to sell rebirth in a world of ice”–and an exhaustive knowledge of mythologies tautly over the speaker’s arduous search for meaning in his existence and ours. Where are we to turn when our ears ring with God’s laughter and when the gods will share little of their courage and less of their knowledge? These poems question urgently and bravely, as if the questioning and the stories themselves are the only fragments we can shore against the ruins.

–Leah Nielsen, author of No Magic

This is a book of inheritances, cycles, natures, mythologies: all real, and all imagined. There is no navigating McCall’s oceans, in which the deeply personal is also the deeply mythic. Here, all heroes shape-shift, all gods trick; myths intrigue, deceive and give no answers. As he writes, it is “the dark forces that chain the universe together.” We are to “watch the man who was born of lightning flood the world with light,” though whether that light is a fire that warms or one that burns the house down is anyone’s guess. In this funny, moody, idiosyncratic book, we are all busted superheroes. We are all gods, all frail, all pieces of the very puzzle we try eternally to solve.

The mythologically-savvy tales of Jason McCall’s premier poetry collection, Silver, illumine both the halls of Valhalla and the land of Alabama, where gods and men wrestle and tease and wound and fall, cohabitating furiously and famously (as they’re inclined to do, according to McCall, when given the all too human space to do so). The poems are tight, gut-honest, fresh, wildly entertaining, and wise as hell. They’re intimate, irreverent, unself-conscious, deeply spiritual, and lucent with humanity. “I keep trying to catch the gods and hold/them, even though it always ends/with me choking on their bones/and spitting them back up into heaven.” This is a gorgeous book, “of shadows and ether,” yet grounded in the tangible, where “We sat together/and watched firebirds cross the sky./We couldn’t decide if we loved them/more because they rose or because they fell.”

–Maureen Seaton,
author of Cave of the Yellow Volkswagen

I wake up to the sound of my roommates taking another hit
and Ginsberg comes to mind. No, they are not the best minds
of my generation, and every street I walk down is labeled
a negro street, and I can’t recite the entire poem like any poet
worth his salt should be able to, so I should stop with the references.
Hell, the only other part I can remember is the line about cock and balls,
and I’m straight so it is too early in the morning for that kind of talk.

My roommates puff and wheeze and giggle again,
and I wonder if any of us is closer to the new and old horizon
filled with flying cars and robots and space colonies
that we were promised by the new religion
that taught us to prey and follow the profits.
The statistics give them a lead, but I’m not
sure if their coke and bongs trump the two hundred aspirin
on my desk. I was never bad at games of chance;
my friends called it a gift, but as a lover of Trojans
I’m suspicious of anything that is wrapped too neatly.

Supernova, White Dwarf, Red Giant…
how many stars die the second
before we wish upon them?

Mom’s not surprised that I still like stories,
makes sure I’ve eaten today, calls me
her baby while she tugs smiles
out of the grandchildren’s cheeks. Mother:
name, title, action verb. Frigg made the world

promise not to hurt her little boy. Balder
must’ve been angry when all the other boys
in Asgard had scars to show to prove their playground
prowess. No girl was ever impressed by how long
he could hold his thumb over a torch.
How many times did he jump out of a tree,
only to have it catch him with a leafy arm
and set him down like a pinecone? He had to cut
quite a deal with the mistletoe:

Cross your fingers when you swear
to my mother, hide in my chest,
and I’ll make sure the new gods remember you.

Fingerprints on my ceiling lead to
God, Spider-Man, and all the other men
I’ve looked up to at some point. Every boy needs
heroes, and I found mine in Hector, Wile E.
Coyote, the 1990-1993 Buffalo Bills, and Job
before he got everything back.
I guess that I was a sucker for
second-place. That’s why I used to lose
games to my brother on purpose
and chase girls who I thought were too fast
for me. I messed up and caught a few
and didn’t know what to do.
I worship gods who are one
step away from the pantheon.
My dreams loiter around the gates
of heaven, but never bother to knock.

I don’t like mountaintops and planes
make me nervous. So much
promise on the way up; too much
certainty on the way down.

Semele saw the face of God
and was burned to the bone.

Actaeon discovered the body of God
and was then eaten alive.

Daphne ran away from God
and was transformed into wood.

Peter denied God
and was ground into rock.

Moses plagiarized God
and was shut out of the promised land.

Fenrir the wolf promised to swallow God
and was able to do it in one bite.

Be the first to review “Silver” Click here to cancel reply.