Something Knows the Moment 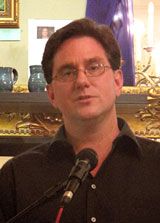 Scott Owens
Author of 7 collections of poetry and over 800 poems published in journals and anthologies, Scott Owens is editor of Wild Goose Poetry Review, Vice President of the Poetry Council of North Carolina, and recipient of awards from the Pushcart Prize Anthology, the Academy of American Poets, the NC Writers’ Network, the NC Poetry Society, and the Poetry Society of SC. He holds an MFA from UNC Greensboro and currently teaches at Catawba Valley Community College. He grew up on farms and in mill villages around Greenwood, SC.

“Why ask where none can answer?” Scott Owens’ collection, Something Knows the Moment, poses this question and accompanies it with a hundred others about the nature of God, the nature of faith, of doubt, of trust and distrust, disillusion and resignation. Occasionally the subject of hope is addressed: “Here at least there is ice cream / and poetry, there are flowers” in the midst of “the nothing that surrounds us all.” The answer to that first searching question is, We ask because we cannot help but ask. –These poems are necessary.

Scott Owens, in his collection, Something Knows the Moment, stares steadfastly into the “unrelenting zero” as if trying to pierce the other side of being itself with laser-like intensity. Blake does come to mind when reading these biblical sketches; however, Owens’ motives shed new light on some of the oldest ideas ever-he presents the Creator in such a way that the reader almost pities Him for his violent inventions–thus forcing the reader to immediately ponder his own nature and humanity. Good poetry does precisely this. At the root of these poems is a deep and palpable compassion, just as when one of Owens’ angels comes down to experience heaven on earth, the celestial tourist wonders, “how the world could help/ but hold such life, how things like this/ are let to fade, pass away”. Be forewarned–there is a tenderness in this book that might shame you.

In his new book of poems. Something Knows the Moment, Scott Owens fashions his own inimitable creation myth in a vital, imaginative retelling: Genesis, the New Testament, Jehovah Himself, Lucifer, the saints and angels, not to mention the ever-present specter of Dante. By turns these poems are terrifying and glorious, always luminous, informed by an abiding faith that the liturgy of poetry will leave us burnished and restored.

Having His Hands Before Him

Less than All cannot satisfy Man

Having his hands before him
having his arms and shoulders needing work
having his mouth and eyes, feet and loins
and something called the void
God wanted more
so with his big right foot
he split the sky in half
so with the heel of his hand
he shaped the day into light and dark
so with great globules of spit
he hung the sun and moon
pissed the stars across the sky
coughed out clouds
threw down trees and vines
and bushes and grasses
and even a shrub or two.

Still, having his hands before him
his forehead shining
his hair hanging about his face
having his ears and nose and high cheekbones
he wanted more
so with his white teeth
he chewed up bits of earth
and molded tiger and lamb
dove and whale, serpent and flea
so with his toes
he scratched out a garden
so with his mirror
he chiseled a pair of little gods
so with his mouth
he said, “Be fruitful and multiply
but keep your hands off my tree.”

Then, having his hands before him,
having his mirror cracked
his eyebrows knitted together
his lips pursed inward
having his teeth dripping
and his fruit spoiled
he wanted more
so with his eyes
he cried a flood
so with his breath
he blew up wind
to knock down towers and walls
so with his tongue
he burned a bush
and etched in stone
and lapped the center of the sea.

Having his hands before him
his fingers plucking his skin
having his chest bared
his belly grown round
his buttocks pushing out
he wanted more
so with his pelvis
he had a son
so with his silence
he nailed him to a tree
so with the shadow of his hand
he took him back
and with his long spine
he lay down beside him
and wept deep
into the hands before him.

Detail from the North Porch of Chartres Cathedral

No feathers, no fins. Each thing he wanted
to outdo the last. How now could he
surpass these flowers of the air, his mind
already tired, his hands sore, his body
spent from shaping. Nothing less than himself
would do, he thought. His own image
in miniature, puppet, mannequin, mirror
that moves. Important now to forget the early
mistakes, jellyfish, plankton, platypus,
to focus on this final act of creation.

In the darkness he saved from his own
restless hands he drank the wine he’d created,
his only company the quiet angels of his mind,
yes-men with halos and swords.
He will have no wings. That night
he slept the troubled sleep of dreams.
He saw faces that mocked his own,
fingers that picked his skin apart,
mouths that spat in the hands that made them.
His teeth will be like white soldiers, angry and hard.

Early the next day, his eyes barely open,
his head still humming from the night before,
he scraped the flesh from his own face,
opened a mouth, pressed his thumb hard
into the wells of eyes, pulled up ears
and nose, stretched out torso, arms, legs,
fingers, toes. He worked for hours shaping
the supple curve of back, rounding the buttocks,
pinching the tight cup of prick and balls.
His hands will be like these, clumsy and precise.

At last he draped it over the white sticks
he cherished, measured out sinew and nerve,
vein and gut, planted the bright seed
of his favorite tree in the loam of brain,
stood back, looked, retched,
dredged the life again from his lungs,
spat it into the mouth, called it
man, son of God, keeper of earth,
dropped it headfirst, naked, crying,
bruised and bloody to the ground.

The sun was bright that day,
burning the skin of my arms,
my uncovered head, burning
the necks of grain I cut.

My brother sat in the shade
cutting the hair and throats
of lamb, letting their blood
drain into the ground, piling

their fat on altars to burn.
Why should he be favored?
What sacrifice made he?
The sun was bright that day

in a time of killing, when men
were marked for safe-keeping.
And I was a child of the times,
son of my mother, father

of sin. I heard the blood
of brothers crying out
from the ground, heard
the heat of the day moaning

in my head. I rose up
from the rows, the seed of earth
in my hand. I was the elder
son, returning to the land

the life taken from it.
I became the father of choice,
explorer of sin and other
dark places. I opened

my brother’s body as I opened
the land to plant this seed
of knowing. I was the third
to be driven, to demand

the knowledge of men and women.
I could not be the Lord’s
shepherd, destined to shepherd
the earth, move where it needed.

I could not live my brother’s
life of unasking grace.
I was his lover, his slayer.
I became what keeps him alive.

The Angel’s Search for Heaven on Earth

In the morning he returns to heaven,
dragging his wings behind him,
his halo loose around his ears.

The night is a bad taste in his mouth,
a memory of retching on doorsteps,
passing out feathers in a bar.

He remembers losing at darts and quarters,
trading small miracles for beer,
swallowing goldfish on a dare.

He remembers tattoos, a rose
on a man’s chest, a tiny cross
between his eyes, the pricks in his own

skin. He remembers the taste of sweat
and cigarettes, flaming shots of rum.
He remembers dancing with a girl

on her chest, watching the skin shrink,
glisten, stretch, warm to falling.
He remembers her body beside him,

He wonders how the world could help
but hold such life, how things like this
are let to fade, pass away.

He can’t help but wonder how much
faith he has spread today, how there
could be any wrong in this quiet touching
some small piece of heaven.

Be the first to review “Something Knows the Moment” Click here to cancel reply.